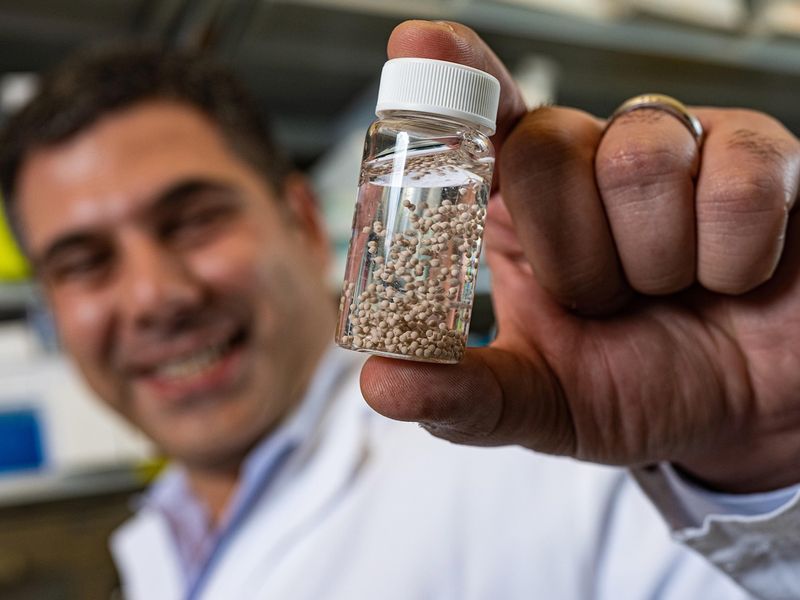 Implanted 'Drug Factory' Wipes Out Cancers in Mice -- Could It Help People?

Tiny, implantable drug "factories" that churn out an immune system protein could offer a new way to battle some cancers, if research in lab mice pans out.

Researchers said the technology is readily translatable to human testing, and an initial trial could begin as soon as this year.

The approach uses tiny "beads" that are implanted near tumors to continuously release controlled amounts of interleukin-2. IL-2 is a cytokine -- immune system proteins that marshal other immune defenses to fight disease, including cancer.

In experiments with mice, scientists found that the IL-2-producing drug factories activated "killer" T-cells and other immune cells, wiping out ovarian, colon and rectal tumors in the animals.

The big caveat is that successes in lab mice often do not translate to humans. But the approach may be put to that crucial test as soon as this fall.

"We're on track to start a trial with ovarian cancer patients," said researcher Omid Veiseh, an assistant professor of bioengineering at Rice University, in Houston.

There has long been a therapeutic version of IL-2, an infusion drug called Proleukin. It was approved back in the 1990s to treat advanced melanoma and kidney cancers that have spread throughout the body. The drug can send some of those patients into remission, but for many the side effects are intolerable.

The problem is, IL-2 has a very short half-life in the blood, so Proleukin has to be given in high-dose infusions, over days. The side effects include fluid leaking from the blood vessels, which can damage vital organs. Many patients also develop antibodies to the drug, which may limit its effectiveness.

Scientists have been working on ways to harness IL-2's good side and limit the bad. Those efforts have focused on engineering better, less toxic forms of IL-2.

Veiseh said his team's approach is "unique" because it focuses on the delivery method, and produces natural IL-2.

"We think it already exists in its best form," he said.

The "inspiration" for the research, Veiseh said, came from a small trial of ovarian cancer patients. IL-2 was infused into the peritoneum -- the sac-like lining that supports the abdominal organs -- rather than into the bloodstream. Some women in the trial had a complete response, a striking result for an often deadly cancer.

But while the approach tended to have fewer side effects, it still required large drug doses, and many women in the trial could not tolerate the toxicity, Veiseh said.

So his team developed a new delivery tactic: Tiny beads that contain human cells engineered to produce natural IL-2. Once implanted beside tumors and elsewhere within the peritoneum, the beads churn out a steady stream of IL-2 -- concentrating it where it is needed while limiting its effects elsewhere in the body.

In lab mice, the treatment started to work within days, and eradicated advanced ovarian tumors in all animals. It did the same in all but one animal with aggressive colon tumors.

"This is very early-stage data, and what works in mice does not always translate to humans," cautioned Dr. Julie Gralow, chief medical officer for the American Society of Clinical Oncology.

That said, she added, "it is a very innovative strategy."

Gralow, who was not involved in the research, said the approach holds potential for cancers that tend to recur in "closed off" spaces like the peritoneal and lung cavities. Those include ovarian, pancreatic and colon cancers, as well as certain lung tumors.

Gralow also noted that the drug factories apparently have an off switch: Researchers found that after about a month, the body's response to the beads -- a process called fibrosis -- shut down the flow of IL-2.

The fact that the treatment is "not indefinite," and could potentially be repeated if needed, is a plus, according to Gralow.

The study -- published March 2 in the journal Science Advances -- was partly funded by Avenge Bio, a biotech startup co-founded by Veiseh. The company has licensed the drug-factory technology from Rice University for further development.

Part of the "beauty" of the delivery system, Veiseh said, is that it's not limited to IL-2. The drug factories could be loaded with cells that produce other molecules, including other types of cytokines.

The American Cancer Society has more on immune system therapies for cancer.