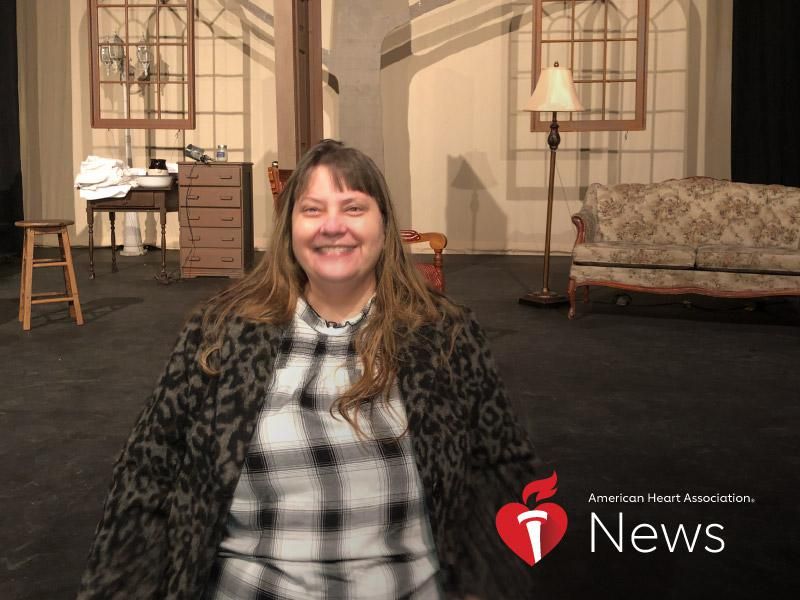 AHA News: Theater Director Has a Stroke the Day After a Crushing Fall

To celebrate her 50th birthday, Victoria Shepherd was pulling out all the stops.

She was in her 30th year as a freelance director in Toronto, so the party would begin at her latest play. Her friends would take in a closing week performance of "The Glass Menagerie" by her favorite playwright, Tennessee Williams.

Next, the party would move to her home. As guests enjoyed a multi-layer cake she planned to bake, they'd be entertained by the musicians from the soundtracks to her plays. Her daughter, Vivien, would sing.

Less than a week before the event, Victoria was showing Vivien a new metallic red lipstick she'd bought for the party. They were on a landing between the kitchen and the back door that also served as an entrance to the basement stairs.

As Victoria was doing a bouncy "lipstick dance," she lost her balance. She tumbled backward, falling down the stairs.

At the bottom, her head bounced off a door. Her left shoulder slammed into the door jamb. She could hear her shoulder crack.

Dazed but conscious, Victoria felt her shoulder throb. She also felt a lump on the back of her scalp. She couldn't get up.

At a hospital, doctors told Victoria she didn't have a concussion. But she did have a shattered shoulder that would require surgery. She was sent home with her left arm in a sling and a prescription for pain medication.

"Don't you think it's weird that they're not keeping me overnight with this lump on my head?" she asked her husband, Brent.

Once home and in bed, Victoria vomited all night. She also had a horrific headache.

The next morning, Victoria was lying in bed, still sick to her stomach.

"You need to get to the bathroom," Brent told her.

Victoria sat up and put her right leg down on the floor.

He urged her again to stand up.

In her mind, she was upright on both feet. But her left leg was still on the bed.

At that moment, Brent noticed Victoria's speech was slurred. The left side of her face was drooping. He knew what that meant.

At the hospital, doctors told Victoria she'd had a hemorrhagic stroke. That happens when a blood vessel breaks and bleeds into the brain. They could not say whether it was related to her hitting her head or to the pain in her shoulder.

Victoria's stroke was considered mild to moderate. She had no cognitive deficiencies and her speech returned to normal within days. She did, however, need physical therapy for her left arm and leg.

With the party canceled, Victoria spent her 50th birthday in the hospital.

The mounting disappointments were difficult to absorb. Yet there were signs of progress. For instance, Brent noticed that each day she could move a little more. She even started directing a play via video conferencing from the hospital.

A few weeks later, Victoria was transferred to one rehab center, and then another. All told, she spent 81 days in facilities.

The biggest challenge was regaining use of her shattered shoulder. Between the stroke and the complexity of the damage, doctors opted to wait before surgically repairing it.

For months she couldn't use it to get up or support herself. Being overweight didn't help, she said. Once she was up, she had to work on relearning to walk and improving her gait.

Victoria also had stroke-related incontinence, which frustrated and humiliated her.

During this time, friends banded together to help. Online they posted updates and organized a visitation schedule. Neighbors planned meal deliveries.

"There was this amazing outpouring of friendship," Victoria said. "I guess that was the best thing to come out of this."

On the downside, Victoria, who came home walking with a cane, felt depressed and scared. Although doctors said there was no indication she would have a second stroke, she felt anxious. She also was angry that her life had changed so drastically.

"I sat around like a lump," she said. "My rage had gotten so bad that I was lashing out at friends."

She started taking a second antidepressant that helped greatly.

Victoria's stroke was in the summer of 2019. A year later, amid the early months of the COVID-19 pandemic, friends persuaded her to go on a hike. For Victoria, this wasn't just about getting out in nature. It also was about taking on a challenge.

In March 2021, Victoria finally had the shoulder surgery. She's regained most motion but was told she would never be able to lift it above shoulder height. She's still trying to regain dexterity in her left hand. Her reduced ability has affected her guitar playing and typing. Her typing speed went from pro to low; because of that, she left an administrative job and is looking for a new one.

Victoria walks without a cane, though she feels some heaviness in her left foot that leaves her nervous about stumbling. She's also able to pedal on a stationary bike, which she uses daily for exercise.

She continues to direct plays and expects her lingering issues to improve.

"Since stroke recovery never stops, I am hopeful," she said.