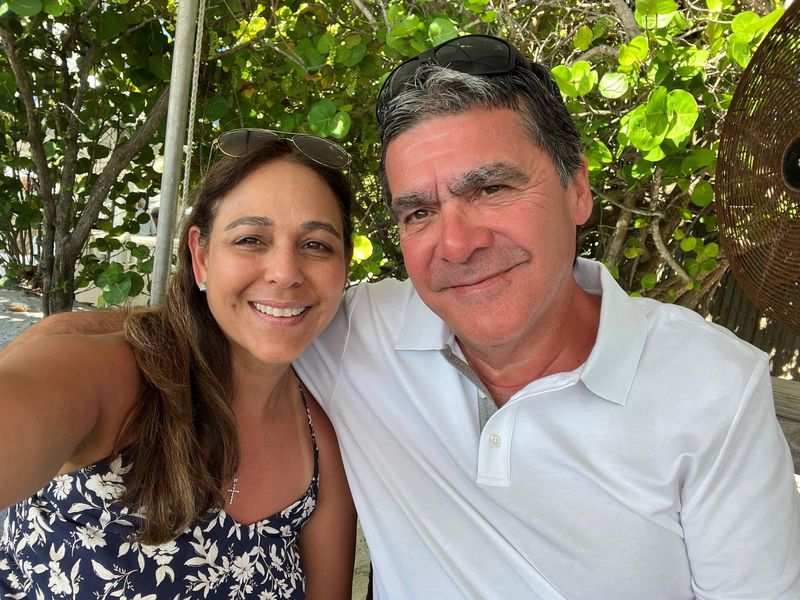 Nearly 10 years ago, Tania Morales was a busy working mom when she was suddenly struck by pain, joint stiffness and exhaustion.

“I felt alarmed, where it got to a point where I was telling my husband, ‘Something's not right with my body and we need to check this out,'” said Morales, who is now 53. “I was literally in so much pain that I was scared. I'm a first-grade teacher. I had to go about my life.”

Morales was diagnosed with rheumatoid arthritis (RA) and fibromyalgia. She spent several years trying to find the right mix of lifestyle changes and medication, collaborating with her doctor on a plan that helps her make the most of living with a chronic illness.


“All I can say is never give up. Never feel like you're defeated with any illness. I mean, it could be cancer, it could be RA, it could be anything that really shakes you up all of a sudden, because RA is something that crept up in my life,” said Morales, who has been married to her husband, Eddie, for 33 years. Together, they have three grown sons and live in northeastern New Jersey.

Morales' experience with RA began in 2013, when she was in her early 40s. Unlike many RA patients, no one in her family had ever been diagnosed with the autoimmune disease. Though people might think of RA as a painful joint condition, it's really a disease where the immune system malfunctions and attacks the body. In Morales' case, it came on suddenly.

“The immune system is designed to be your friend, to fight off viruses, bacteria, infections and, for unclear reasons, it turns on yourself,” Ali explained. “It turns on your own body.”

Morales had pain in her fingers and her ankles. It was hard to get out of bed in the morning or to sit up. After confirming RA through blood tests, her primary care doctor referred her to a rheumatologist. On the advice of a friend, she later switched to Ali of Mount Sinai, in nearby New York City.

There she began working with Ali to find the right mix of medications for her, starting on a newer type of medicine known as a biologic and eventually shifting to a different one.

Morales initially resisted taking medication — from the steroid prednisone and methotrexate pills that she started on to the injectable biologic Enbrel that she tried to the oral biologic Xeljanz that eventually put her in remission — but she decided to take her doctor's advice to get her condition under control.

In almost everyone, if you do nothing the disease will progress, Ali said. Once damage happens, it's irreversible.

“Her story particularly comes to mind because she was so adamant not to go on anything and it really changed her life, I think," Ali said. "It's just a good example of you really have to just trust the doctor and this is where it gets so difficult for patients and I can empathize with them because they don't know us from Adam when they meet us."

Morales' medication hesitation meant she never fully felt comfortable with certain treatments. In her case, she was able to work with Ali on eventually eliminating the prednisone and methotrexate from her regimen. Now, she just takes two pills of a single biologic drug every day. She has been in remission for a few years now, with very few flareups and minimal morning stiffness.

Morales also worked on lifestyle changes, including eating a healthier diet, walking daily, going to the gym with friends, and adding in yoga and stretching.

Morales credits Ali with being a good listener and working with her to limit medications, where possible.

“I feel wonderful,” Morales said. “I get up and go. I don't need to nap during the day. I feel energetic. I'm happy."

Dr. Brett Smith, a rheumatologist from Knoxville, Tenn., who was not involved in Morales' case, said it can be hard to understand why some people develop RA. Risk factors can include genetic predisposition, smoking, obesity, and even traumatic injuries that trigger inflammatory arthritis.

Exactly how a person's body reacts to the disease can also vary.

“Some people, honestly, they have very easy-to-control rheumatoid [arthritis]," Smith said. "It takes one medicine, sometimes two at the most. And then other people, it's not that common, but sometimes you might try 10 different medicines and just never gain control for some reason. And there are people that have a variety of side effects to the medication," which makes it more complicated, he noted.

“I think, unfortunately, it's a challenging disease, even though it probably is the best studied inflammatory arthritis on the planet. Anything that we do has risk to it and anything that we don't do potentially has risk by not being aggressive enough,” Smith said.

“I would say people envision rheumatoid [arthritis] as kind of the crippling arthritis or people in wheelchairs. With the advent of biologics, just over 20 years ago, we really don't see that nearly as much anymore. And people have pretty normal lifestyles now for the most part, too. So, it's been a dramatic change for the patient,” Smith added.

Ali stressed that some lifestyle factors can also help keep symptoms under control.

Patients who have toxic work environments should try to find a new job. Meditation can be helpful. Exercise daily if the joints allow for it, possibly with non-weight bearing exercise like an elliptical machine, biking or swimming, Ali suggested. It's possible that stress is a trigger because it may amplify pain signals to the brain, he added.

The goal is to return the patient to a normal life, Ali said.

Morales appreciates the collaboration with her doctor.

“I was a little stickler with Dr. Ali, but I have to say, I admire him for being my friend, but also being my doctor, a good listener, never treating me like he was the only one that had the authority over my health condition,” Morales said. “We worked as a team and I think that's important, too. Anybody who struggles with any illness, could be RA, anything, you have to feel comfortable, not only within yourself, but also with your doctor. Is the doctor working with you? Is the doctor listening to you? Is the doctor trying to help you get better?”

The Arthritis Foundation has more on rheumatoid arthritis.