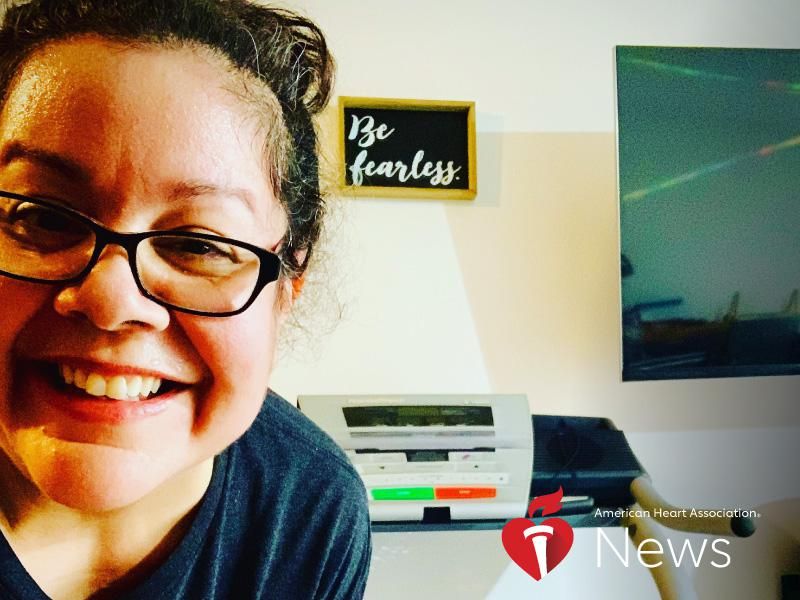 AHA News: Health Coach Was Once an Overworked, Unhealthy New Mom Who Had a Stroke at 32

Kelly Fucheck woke up one summer Sunday ready to spend a quiet morning at home with her husband, Glen. Their toddler, Tomas, had spent the night at grandma's house.

She picked out a pair of comfy pants, but when she tried to put them on, she swayed to the left. Then Kelly noticed a sharp pain in the back of her neck. She felt foggy.

She went into the bathroom and splashed water on her face. She became nauseous. The room began to spin. She looked at herself in the mirror, but her image was distorted.

"It reminded me of Van Gogh's 'Starry Night,'" she said. "It was all swirls."

Her chest felt heavy too. Kelly crawled back into bed and tried to yell for Glen. But her voice was weak and Glen didn't answer. He wasn't there; he went out for a box of doughnuts.

"It felt like he was gone forever," said Kelly, who lives in Houston. So she waited.

At the time, Kelly was 32. She worked a high-stress job in financial risk management at a bank, smoked and weighed nearly 300 pounds. She didn't exercise and her diet consisted of fast food and pasta.

When Glen came home, she asked him to get her some medicine and she stayed in bed for the rest of the day.

Kelly thought she just had a bad headache or side effects from a procedure the prior week to check her fallopian tubes after an ectopic pregnancy.

On Monday, with her neck pain worsening, she called in sick to work. She made a doctor's appointment for first thing Tuesday.

The doctor suspected an inner ear infection. Then he asked her to squeeze his hands and lift her head. She couldn't do either very well. He immediately ordered an MRI. Less than two hours later, Kelly learned she had a rare, large tear in her vertebral artery. She was taken to intensive care at the hospital across the street.

A neurologist explained she'd had a stroke, maybe two. The tear in her artery that led to her stroke is often caused by neck trauma, the doctor said. But Kelly didn't remember hurting her neck.

Kelly's dad, who was at the hospital with her, called Glen who'd left to pick up Tomas from daycare. "Kelly had a stroke," her dad told Glen.

"That didn't process," Glen said. "You just don't think it would ever be something like that. You think, 'Strokes are for old people.'"

In the hospital, Kelly's left hand and leg were weak and her mouth muscles seized up. She was scared. She asked Glen to get her a will.

After 10 days in intensive care, Kelly began to recover.

Physical therapy helped her build strength and improve her body. Her mind, however, was wracked with fear. She was afraid she would damage her torn artery further and have another stroke. She didn't want to talk about her experience.

"I was so ashamed," she said. "I thought I brought the stroke upon myself. I was very depressed, confused, angry, and I was wondering why I survived, why it happened."

A year later, a follow-up scan showed the torn tissue had healed.

With that problem solved, Kelly's doctor sat her down to discuss the next challenge.

He said she had to lower her body fat, get active, eat better and get mental health help. He asked her to start by putting in just two minutes a day on a treadmill. Kelly begrudgingly agreed.

She cleared off the clothes hanging from the machine in her bedroom and climbed on. Those two minutes were a struggle. But "I just kept on focusing on that one step in front of the next," she said. "I knew I could always slow down. As long as I moved forward, I was winning."

Slowly, she progressed from walking to running. Then she eventually signed up for a 5K. Next it was a 10K. Now she has run six half-marathons. She also started lifting weights.

Her father encouraged her to open up about her story, and she did. She also left her job. Now she's a fitness trainer and certified health coach.

Three years after her stroke, Kelly found out she was pregnant. All went well for her and her baby girl, Lillian.

Fast forward eight years, and Kelly has her dream job doing social media engagement for the company that owns the maker of her treadmill. She also co-hosts a survivor podcast with a friend who had a heart transplant.

Kelly still grapples with the fear of having another stroke. "It's always there," she said. But she's learned ways to cope, including meditation. She also feels empowered when she shares her story and encourages others to adopt a healthier lifestyle.

"It's truly a blessing to survive and try to help others," she said. "I feel like I'm doing what I'm meant to do now, and I'll share my story until I can't anymore."