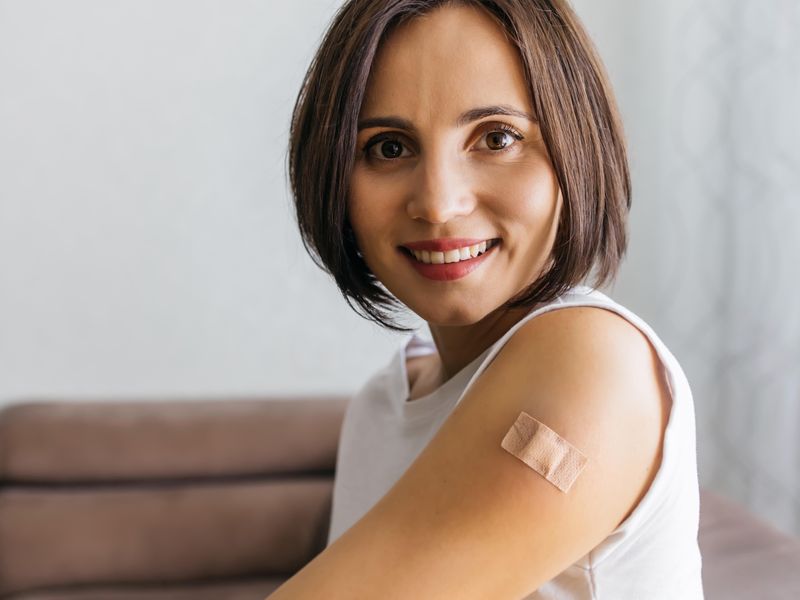 Changes in Menstrual Cycle Can Come After COVID Shot

Many have experienced side effects after getting a COVID vaccine -- tiredness, fever, headache and soreness are the most common. But a new study confirms that people who have periods may experience lesser known issues -- heavier periods or breakthrough bleeding.

Researchers found certain people were more likely to experience one or the other after getting a shot: Those who identified as non-white or who were older, along with those who also reported fever or fatigue as side effects. People who had endometriosis, heavy bleeding, fibroids or other reproductive problems also reported heavier menstrual flow following a shot.

But the study authors said these changes are not dangerous. And other experts say the benefits of vaccination far outweigh the possible side effects.

"The impact of vaccine hesitancy cannot be underestimated in public health," said Dr. Alison Edelman, a member of the American College of Obstetricians and Gynecologists' Clinical Document Review Panel-Gynecology and an expert on COVID-19 and menstruation changes.

"We have a long history of safe vaccine development and we know a lot about vaccines -- not all side effects with a vaccine are harmful like feeling temporarily fatigued, having a sore arm, or getting a fever," Edelman said. "But if we didn't counsel individuals on what to expect, then those experiencing that side effect would have been really concerned and that fuels fear and mistrust."

Previous studies have found that the most commonly reported side effect reported by people experiencing changes to their menstrual cycles were heavy periods that "quickly reversed" in a matter of cycles. But how the vaccine is able to impact the uterus is another story.

"The uterus is an immune organ," said study author Kathryn Clancy, a professor of anthropology at the University of Illinois Urbana-Champaign. "People have fatigue and sore arms that are responses to the vaccine, so it's not a stretch to imagine that an immune organ like the uterus, that changes and clots and all these things that are related to the immune system, wouldn't be affected."

Other immunizations are also known to impact the uterus and menstrual flow, but the researchers lamented that these are not issues that have been studied well.

"So far, there's some evidence that there are some menstrual irregularities with other vaccines, like the HPV vaccine, but the problem is there haven't been a lot of studies that look to this for any vaccine. Most studies only focus on fertility, like the flu vaccine," Clancy said.

The survey, published July 15 in the journal Science Advances, analyzed responses from over 35,000 people in the two weeks after they received the vaccine.

Only those who had not been diagnosed with COVID-19 were included in the analysis, as the illness itself can sometimes trigger changes in menstrual flow. The researchers also included postmenopausal women and people on hormone therapies (such as transgender men), a group that would be especially surprised to find breakthrough bleeding.

The analysis found that just over 42% of menstruating survey respondents reported a heavier flow after receiving the vaccine, either in the first seven days or eight to 14 days after initial vaccination. More than 70% of respondents using long-acting reversible contraception (IUDs and hormone implants) reported breakthrough bleeding, as did 38.5% of people undergoing gender-affirming hormone treatments.

"I think the important thing to know is that this is something that is happening and will probably continue to happen to such an effective vaccine, and we're not the only study up to this point that's shown there are changes to periods because of this vaccine," said lead author Katharine Lee. She's a postdoctoral research scholar in the Division of Public Health Sciences at Washington University School of Medicine in St. Louis.

"Menstrual health has been woefully understudied, not just in vaccine trials but really almost every area of research," noted Edelman. "The public have spoken -- this is important to them and that should not be surprising. Half the population will, does, and has menstruated. It's a routine biological function that has meaning both to the individual and to science. I hope we can learn from this for ongoing and future vaccine trials."

Visit the U.S. Department of Health and Human Services' Office on Women's Health to learn more about menstrual cycles.