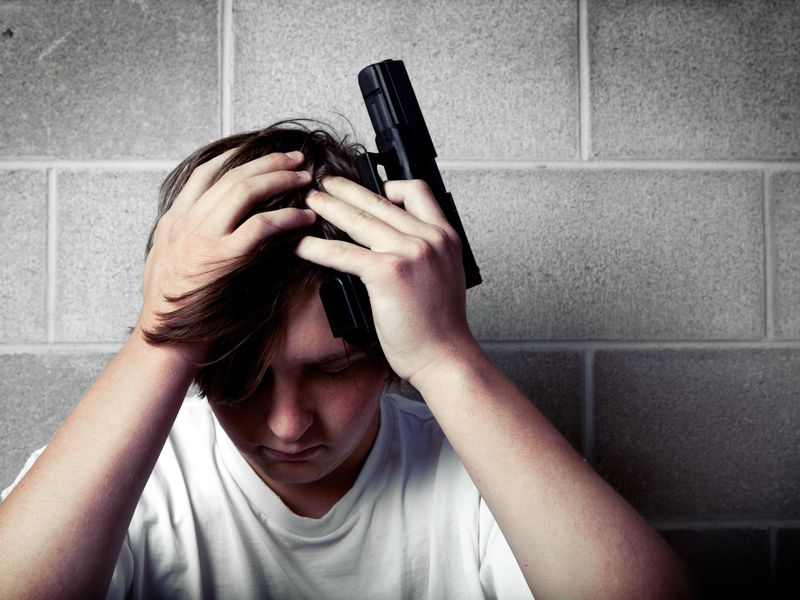 Gun Deaths Rose 30% Among U.S. Kids in a Decade

A grim new analysis finds that American youth became 30% more likely to die as a result of gun violence over the past decade.

The jump in risk appears to have been largely driven by big spikes in gun-related suicides, as well as increases in all manner of gun-related deaths among both girls and non-Hispanic white kids, investigators found.

In fact, “the last decade may have seen the most marked increase to date in firearm deaths among children,” noted study co-author Jagdish Khubchandani, a professor of public health at New Mexico State University, in Las Cruces.

Khubchandani said the findings unfortunately did not come as a shock, “given the constant increase in firearm ownership and access” in the United States.

Still, the results are sobering. By 2020, he said, losing one's life at the hand of firearms was pegged as the leading cause of death among children.

There was one caveat, however: those states with the lowest gun violence death rate over the course of the prior decade turned out to be the ones that also had the most stringent gun regulations. And that, said Khubchandani, suggests there might be a legislative way to protect American kids going forward.

Khubchandani and his University of Toledo study co-author James Price pointed to prior statistics that indicate gun violence poses a well-established threat to American minors.

For example, they noted that gun-related deaths among American kids under the age of 15 account for 90% of all such deaths around the world when taking into account all wealthy industrialized nations.

And in 2019, gun-related accidental injury, murder and suicide accounted for three of the top 10 leading causes of death among American kids under the age of 13.

To explore a decade's worth of gun violence trends among American youth, Khubchandani and Price pored over data that had been compiled by the U.S. Centers for Disease Control and Prevention.

All the gun deaths in question occurred among boys and girls aged 19 and younger. Some of the deaths were deemed accidental, while others were the result of suicide, murder or interactions of a criminal nature.

In the end, the duo identified a 30% rise in risk over the 2010 to 2019 study timeframe. During that period, suicides among young Americans rose by 63%. Among girls, gun-related deaths rose by 46%. Risk also rose by 45% among white youth and by 36% among Black youth.

But the increase in risk played out differently, depending on geography.

For one thing, 18 states had so few gun-related deaths among youth overall that no conclusions about risk trends could be drawn, the study authors noted.

At the same time, while young Americans across the South saw their risk of dying after an interaction with a gun rise by 52%, California and three northeastern states (New York, New Jersey and Pennsylvania) experienced no risk increase at all, the findings showed.

A number-crunching analysis suggested one possible reason why: All four states had relative strong laws on the books dedicated to limiting a child's access to guns.

Looked at in reverse, six out of the seven states with the highest jump in gun-related deaths among kids either had no child access gun laws of any kind or only very weak laws in place. Those states included South Carolina, Arkansas, Colorado, Ohio, Kansas, Texas and Indiana.

Khubchandani said that trend suggests that “reforming regulations and looking at firearm access are a major part of the equation directly responsible for youth gun-related deaths.” At the same time, he acknowledged that poverty, crime, household gun ownership rates and difficulties accessing mental health care likely also play a role.

Absent a major shift in these factors, “we can probably see this trend of youth firearm deaths escalating further," he warned.

The findings were published recently in the American Journal of Medicine Open.

Ari Davis is a policy analyst with the Coalition to Stop Gun Violence, based in Washington, D.C. Davis cautioned that the current analysis, on its own, doesn't prove that tighter gun laws actually lower risk among young people.

“However, there is a body of research showing that strong gun laws are linked to reductions in gun deaths,” noted Davis. "Access prevention laws reduce youth suicides, homicides and unintentional injury.”

“Guns are now the leading cause of death for children and youth in the U.S. ages 1 to 19, accounting for more deaths than car crashes or cancer," Davis said. "We must treat gun violence like the public health epidemic that it is, and pass evidence-based policies to protect our children and prevent these deaths.”