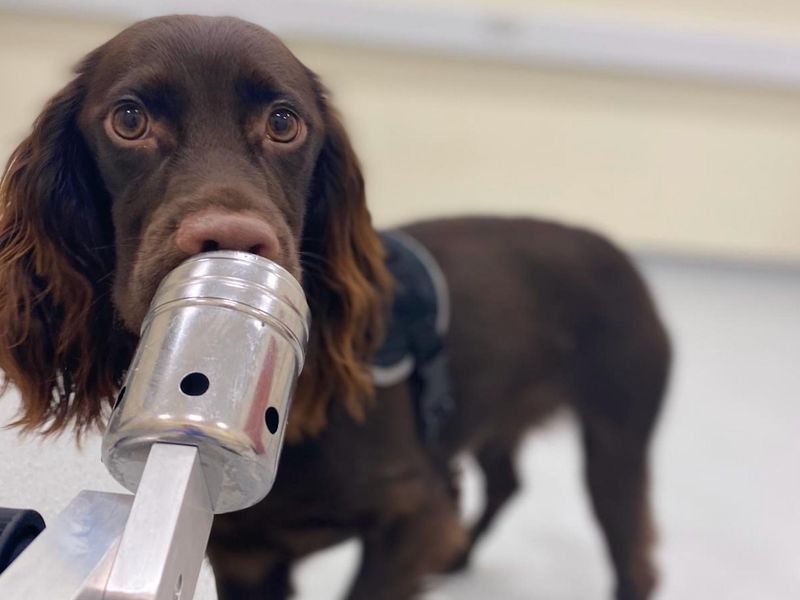 Perceptive Pooches Can Smell Your Stress

Everyone knows dogs have a keen sense of smell, but now researchers have discovered they can even smell stress in the breath and sweat of humans.

"Dogs possess an incredible sense of smell. Previous research has demonstrated their ability to detect changes within the human body from odor alone, such as our blood sugar levels," said study author Clara Wilson, a PhD student in the School of Psychology at Queen's University Belfast in Northern Ireland. "Whether dogs' capabilities extend to detecting odors associated with psychological experiences had been far less explored."

Wilson and her collaborators investigated the idea of whether dogs could assess human psychological states with scent rather than audio or visual cues, similar to dogs that can sniff cancer, Parkinson's disease or COVID-19.

The U.K. research team worked with four dogs of varying backgrounds and 36 humans.

The researchers collected samples of sweat and breath from participants before they did a difficult math problem and again after they worked through the problem.

While the human participants self-assessed stress levels, the researchers only used their samples if the person had an increase in blood pressure and heart rate.

The human stress response triggers hormonal and nervous system changes, which can change a person's scent.

The dogs were taught how to search a scent lineup and to alert researchers to a correct sample, though it wasn't yet clear at that time whether the dogs would be able to accurately detect the changes.

"A canine's exceptional sense of smell, in conjunction with their willingness to work
alongside humans, facilitates this type of research, as the dogs can engage with this task as
a type of seeking game," Wilson said.

In each test session, each dog was given a person's relaxed sample and stress sample, taken four minutes apart. The dogs correctly alerted researchers to the stress samples.

In a laboratory and in field detection, such as in bomb sniffing, dogs find and alert the handler to a hidden odor.

"One difference here is that the dogs are asked to pick between several odors that may smell very similar," Wilson said.

The dogs who participated in the study were two rescues, a breed called a lurcher and a terrier-type mixed breed, as well as two dogs who had been with their owners since they were puppies, a cockapoo and a cocker spaniel.

The findings were published Sept. 28 in the journal PLOS ONE.

Dr. Cassidy Cordon, an assistant professor at Washington State University who trains veterinary students, has observed dogs pick up on their owners' stress, which could be through visual cues rather than the scent of stress.

The pandemic gave veterinarians a window into differences in pet behavior when their owners weren't in the exam room because of COVID restrictions, Cordon said.

"Any time somebody's with a doctor, it's high anxiety, but I think also with our changing definition of what pets mean to people in society these days, it's a high anxiety appointment for owners, too," Cordon added.


While past research has been done on dogs that can detect medical issues, it's harder to define the work of an emotional support animal, she said. While, of course, pets provide emotional support not all animals are trained for the work.

"I think the most interesting part for me in that article would be in our defining of service animals," Cordon said.

Cordon noted that her practice is "fear-free" and uses animal pheromones to reduce the stress of dogs and cats by spraying the happy pheromone scents onto a towel to wrap the pet in or using it in an outlet diffuser.

Future studies might look at what emotional context dogs understand from the stress smell, Wilson said.

The findings could have applications for training anxiety and PTSD service dogs, which currently are trained on visual cues, she said. But this would first need to be tested in real-world situations and not just in a lab.

"This study provides further evidence of the extraordinary capabilities of 'man's best friend,'" Wilson said. "Research into what dogs can pick up about humans from smell alone is a growing area."


The American Heart Association has more on pets helping with stress and mental health.