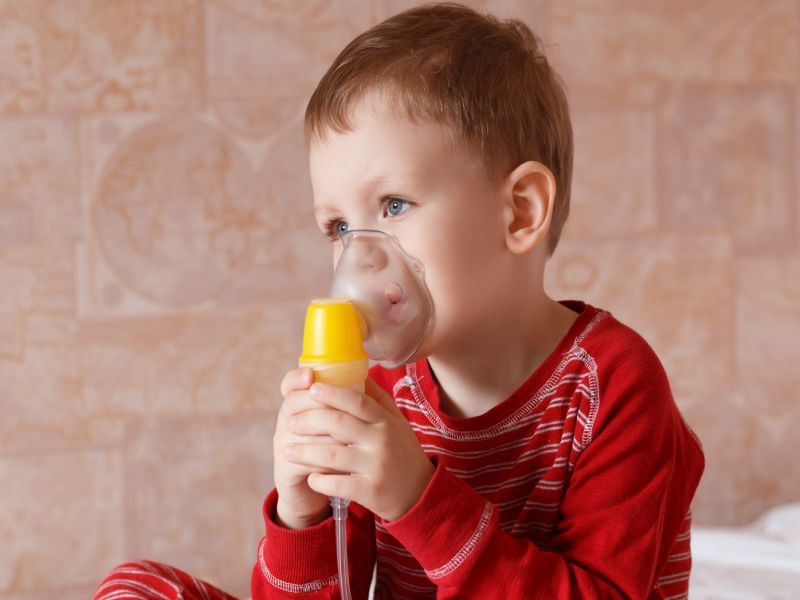 Temporarily boosting the dose of inhaled steroids may not do much to reduce the frequency of severe asthma flare-ups in children, according to two new studies.

Short-term increases in inhaled steroids might even be tied to slightly slowed growth in kids, one of the studies suggested.

Asthma flare-ups in children are common and many doctors increase doses of inhaled steroids when children have early symptoms, such as coughing, wheezing and shortness of breath. But there's been little research into the safety and effectiveness of this approach.

In order to learn more, researchers in a U.S. trial studied 254 children, aged 5 to 11, with mild-to-moderate asthma for nearly a year.

The study was funded by the U.S. National Heart, Lung, and Blood Institute (NHLBI), and it was led by Dr. Daniel Jackson, associate professor of pediatrics at the University of Wisconsin School of Medicine and Public Health, in Madison.

All of the kids in the trial were already placed on "low-dose" inhaled corticosteroids -- about two puffs from an inhaler twice daily.

However, at the earliest signs of a severe asthma flare-up, half of the children were kept on low-dose inhaled steroids, while the other half were put on "high-dose" inhaled steroids -- five times the standard dose.

The kids did this twice a day for seven days during each episode. The study was "blinded," meaning the children and their parents were not told which dosage was being used.

The study's main finding was that kids in the high-dose steroid group did not have fewer severe asthma flare-ups as a result of the increased treatment.

The number of asthma symptoms, the length of time until the first severe flare-up, and the use of albuterol (a rescue medication for asthma symptoms) were also similar in both groups, according to the study.

Jackson's team also found that growth among children in the high-dose steroid group was about 0.09-inches less per year than among those in the low-dose group -- even though the high-dose treatments were used only about two weeks a year on average.

This growth difference was small, but adds to previous research showing that children who take inhaled corticosteroids for asthma may have a slightly slower-than-normal growth rate. More frequent or prolonged high-dose steroid use might increase this impact on growth, the study authors said.

A second trial was led by Tricia McKeever of the National Institute for Health Research in England. Her team tracked outcomes for more than 1,900 kids with asthma who were similarly placed on either a temporary high-dose (quadruple the amount) or low-dose steroid protocol when flare-ups occurred.

In that study, increasing the steroid dose did seem tied to a slight lessening of the frequency of asthma flare-ups, McKeever's team reported in the same issue of the NEJM.

But the trial was less rigorous than the U.S. trial (it was "open-label," meaning the patients knew which dose of drug they were taking), and the benefit was only deemed to be modest.

Also, kids taking the quadrupled dose had a higher rate of "adverse effects" related to the steroids than children on the lower dose, the investigators reported.

Both trials were also presented at a joint meeting of the American Academy of Allergy, Asthma & Immunology and the World Allergy Organization, in Orlando, Fla.

In a university news release, Jackson said his team's findings "suggest that a short-term increase to high-dose inhaled steroids should not be routinely included in asthma treatment plans for children with mild-moderate asthma who are regularly using low-dose inhaled corticosteroids."

According to James Kiley, director of the NHLBI's Division of Lung Diseases, "This study allows caregivers to make informed decisions about how to treat their young patients with asthma."

Kiley suggested in the news release that "trials like this can be used in the development of treatment guidelines for children with asthma."

Two asthma experts unconnected to the studies said the findings cast doubt on the value of using high-dose steroids in this context.

Dr. Sherry Fazan is attending physician in allergy and immunology at Northwell Health in Great Neck, N.Y. She said that, even in the British study, "the degree of improvement is debatable, and the open-label nature may have introduced bias affecting the results."

And, she added, the more rigorous U.S. trial "indicates that the harm of this practice may outweigh the benefits in children with mild-to-moderate persistent asthma."

Dr. Walter Chua is senior pulmonary attending physician at Long Island Jewish Forest Hills in Forest Hills, N.Y. He stressed that asthma symptoms and behavior varies widely between patients, so it's still tough to discern from these studies what the best course might be for individual patients.

What the research "does seem to reinforce, is that every attempt should be made to prevent asthma exacerbations prior to any augmentation of medication including: ensuring asthma medication compliance, proper inhaler technique, and avoidance of known triggers in the household," Chua said.