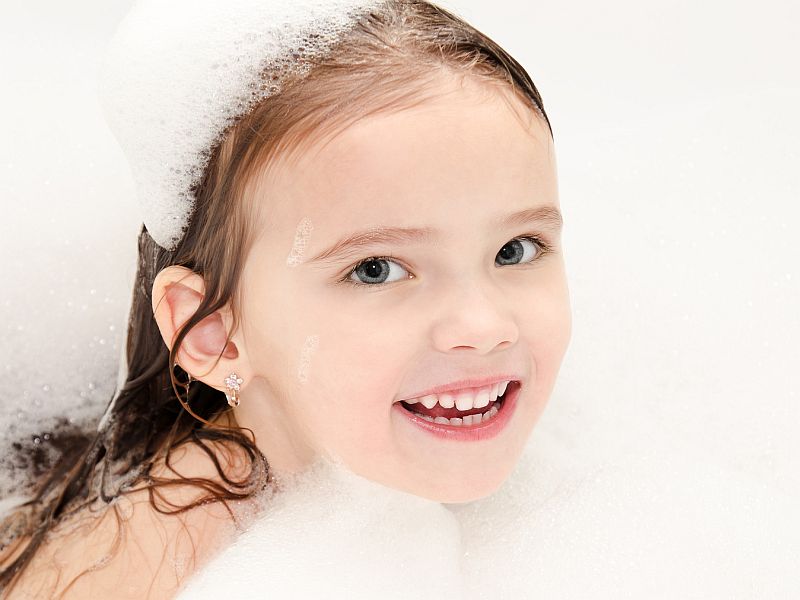 Could Soaps, Shampoos Be Pushing Girls Into Early Puberty?

Exposure to chemicals found in a wide array of personal care products has been linked to early puberty among girls, a new investigation warns.

The issue centers on specific chemicals including phthalates, parabens and phenols. They're found in an array of products, including perfumes, soaps, shampoos, nail polish, cosmetics, toothpaste, lipstick, hairsprays and skin lotions -- to name just a few.

These chemicals "get into our bodies either by absorption through the skin, by being inhaled, or being ingested [like lipstick]," explained study author Kim Harley. "Once they are in the body, they are quite quickly metabolized and [then] excreted in urine."

Harley is associate director of the Center for Environmental Research and Children's Health at the University of California, Berkeley.

As to how routine exposure to the chemicals might affect puberty, she said they've "been shown to mimic estrogen in certain laboratory conditions."

In fact, prior animal studies have suggested that exposure can throw puberty timing out of whack, Harley said.

Now, her team found that "the higher the levels of the chemicals in mothers' or daughters' bodies, the earlier the puberty" among girls. No such link was found for the timing of male puberty, however.

"We were a little surprised that the associations were only with girls and we didn't see much with boys," Harley said. "But since these tend to be estrogenic chemicals, it makes sense that they might impact girls."

To explore the issue, investigators analyzed data collected in a study that enrolled pregnant women between 1999 and 2000. The women had blood tests twice throughout their pregnancy, and interviews were also conducted to gauge exposure to the chemicals in question.

Nine in 10 of all the urine samples taken from the expectant moms tested positive for chemicals that fall into one of the three chemical classes of concern, with slightly lower percentages (about seven in 10) with respect to a chemical called triclosan. An antimicrobial, triclosan was banned for use in soap by the U.S. Food and Drug Administration in 2017, but it can still be found in some toothpastes, the researchers noted.

In the study, the scientists tracked 338 of the women's offspring through adolescence, with urine samples analyzed at the age of 9. Onset of puberty was then checked regularly between the ages of 9 and 13.

The researchers determined that for every doubling of a woman's blood level of phthalates, the development of her daughter's pubic hair started 1.3 months earlier than usual.

A doubling of a mother's triclosan levels was also linked to a one-month earlier start of her daughter's first period, the study found.

Blood tests were also take of the children themselves. Harley's group found that a doubling of paraben levels in girls was linked to the one-month earlier onset of both breast and pubic hair development.

Harley stressed that the findings are "definitely not" absolute proof that such chemical exposure actually causes early puberty among girls. "There is always the possibility that there were confounding factors that we were not able to control, or that our findings were due to chance," she explained.

"That said, our findings are consistent with what we know about the endocrine-disrupting properties of these chemicals," said Harley. "So, although we are not ready to say that early life exposure to these chemicals causes earlier puberty in girls, we have enough evidence to be concerned."

The findings were published in the Dec. 4 issue of the journal Human Reproduction.

An industry group said the study had limitations.

"Patterns of exposure may have varied greatly over the course of pregnancy in the mothers, and between the ages of 9 and 13 in the boys and girls, so the representativeness of the exposure levels is unknown," she added.

"Furthermore, as phthalates, parabens and phenols are all rapidly excreted from the body, measured levels will change not just over months and years, but over the course of a single day, so that any given measurement reflects only a specific moment in time," she added.

Last but not least, "the researchers also acknowledge exposure to other environmental chemicals, such as pesticides encountered during farm working, might also affect the results," Loretz concluded.

But one other expert said the findings aren't so surprising.

Dr. Margaret Cuomo is a board-certified radiologist who formerly served as an attending physician in diagnostic radiology at North Shore University Hospital in Manhasset, N.Y. She said "many previous studies have reported the association between the chemicals that are called 'endocrine disruptors' and human health".

As to what consumers can do, Cuomo suggested checking out the website of the watchdog organization Environmental Working Group. There you can "find a list of those products that are relatively safe to use," meaning products that are free of parabens, phthalates, triclosan and similar chemicals.

Cuomo also advised picking household cleaners and detergents are that "environmentally safe," and opting for organic foods when possible.

"States such as California and Washington have laws protecting consumers from harmful chemicals in a variety of products," she added. "[And] New York is the first state to require disclosure of harmful chemicals by manufacturers of household cleaning agents. Hopefully, New York State's initiative will be extended soon to include many other consumer products."

There's more on puberty at the U.S. National Institute of Child Health and Human Development.