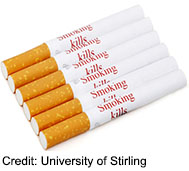 Would a Health Warning on Every Cigarette Help Smokers Quit?

Health warnings on individual cigarettes could be a more powerful way to coax smokers to quit than warnings on packages, British researchers say.

They assessed the reactions of 120 smokers, 16 and older, to the warning "Smoking kills" printed on individual cigarettes.

They said a caution on each cigarette would extend the health message, because it would be visible when each smoke is taken from a pack, lit, left in an ashtray, and with every puff.

Many of the female participants considered a warning on individual cigarettes depressing, worrying and frightening, according to the Cancer Research U.K.-funded study. It was recently published in the journal Addiction Research and Theory.

A warning visible to others could be a deterrent, the study found.

"The consensus was that individual cigarettes emblazoned with warnings would be off-putting for young people, those starting to smoke, and non-smokers," said study leader Crawford Moodie. He's a senior research fellow at the University of Stirling's Institute for Social Marketing in Scotland.

"This study suggests that the introduction of such warnings could impact the decision-making of these groups. It shows that this approach is a viable policy option and one which would -- for the first time -- extend health messaging to the consumption experience," Moodie said in a university news release.

Government officials in Scotland and Canada are considering requiring warnings on individual cigarettes.

"Government anti-smoking campaigns and tax rises on cigarettes remain the most effective methods to stop young people starting smoking, but we need to continue to explore innovative ways to deter them from using cigarettes to ensure that youth smoking rates continue to drop," she said in the release.

"This study shows that tactics like making the cigarettes themselves unappealing could be an effective way of doing this," Bauld added.

The American Lung Association has more on the dangers of smoking.