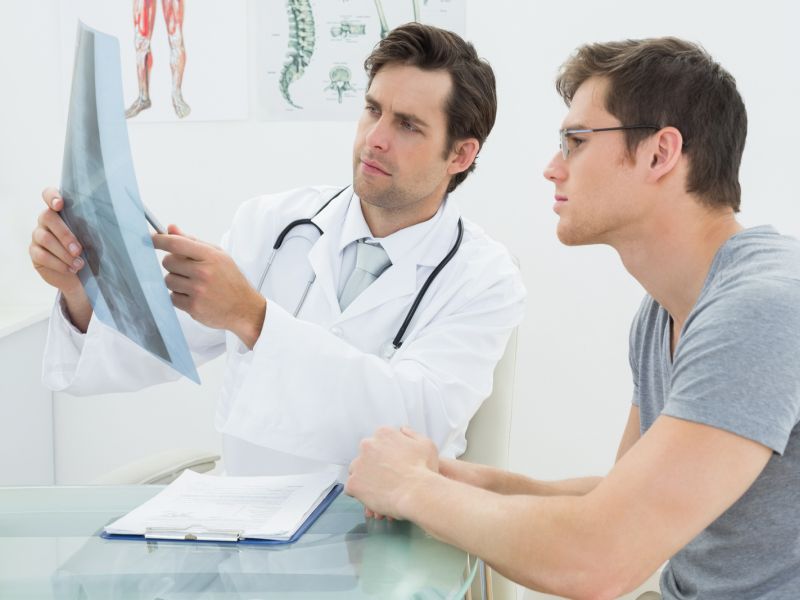 'Less Is More' When it Comes to Testicular Cancer Chemo, Study Suggests

Treatment with half the typical amount of chemotherapy can still prevent the return of one type of testicular cancer, a new study suggests.

Giving patients with the "non-seminoma" form of testicular tumor just one cycle of chemotherapy was just as effective at preventing the cancer from coming back as the standard two cycles, the study found.

Cutting the amount of chemotherapy in half also reduced serious side effects that can have a lifelong impact on a patient's health, said the team of British researchers.

The findings might prove a boon for patients, most of whom are young.

"Reducing the overall dose of chemotherapy could spare young men who have their whole lives ahead of them from long-term side effects, and also means they will need fewer hospital visits for their treatment," said lead researcher Robert Huddart.

He spoke in a news release from The Institute of Cancer Research in London, where he's a professor of urological cancer.

One patient who's been treated using the lower-dose strategy said he's already benefiting.

"I was playing [soccer] semi-professionally at the time I was diagnosed," noted 35-year-old Kris Taylor, from Britain's West Midlands. "Even though my prognosis was good, knowing that you have cancer is really scary, and the key thing for me was to get back to normality as soon as possible."

Speaking in the institute news release, Taylor said he'd "already had to have time off for surgery, so when I was offered the chance to have less chemo but with no greater risk the cancer would return, I jumped at it."

Currently, testicular cancer patients first undergo surgical removal of the affected testicle. They then choose between two cycles of chemotherapy -- to destroy any cancer that may have spread to other areas -- or a watch-and-wait "surveillance" approach.

If the latter route is chosen, the patient receives no chemotherapy unless their cancer comes back, at which point they receive three cycles of chemo.

Survival rates for testicular cancer are very high, but many patients are diagnosed in their 20s and 30s, so having chemotherapy means they may have to live with long-term side effects, the researchers noted.

In the new study, Huddart's group tracked outcomes for nearly 250 men with early-stage testicular cancer that was at high risk of returning after surgery. The men received one three-week cycle of a chemotherapy known as BEP -- a combination of the drugs bleomycin, etoposide and the platinum agent cisplatin.

After two years, testicular cancer returned in just 1.3% of the patients. That was nearly identical to the rate found in prior studies of patients who had received two cycles of the chemotherapy, the researchers said.

About 41% of patients who received one cycle of chemotherapy had one or more serious side effects during treatment -- such as an increased risk of infection, sepsis or vomiting -- but only 2.6% had long-term side effects such as damage to their hearing.

For his part, Taylor acknowledged that "the side effects of the treatment were really difficult."

But he said that he was still able to return to soccer quickly, and "five years on, and I'm still fighting fit."

"It's great to know that others may now be able to benefit from the trial's findings," he added. "Being able to reduce the amount of chemotherapy a person receives can make such a big difference to their quality of life in both the short-term and the long-term."

Two U.S. experts in treating testicular cancer agreed that the study might change practice. But they also cautioned that treatment decisions are always made on a case-by-case basis.

"This is an important study emphasizing how 'less is more' in patients," said Dr. Nikolaos Karanikolas, who directs urologic surgical oncology at Staten Island University Hospital in New York City.

But overall, "the need to provide effective care while preserving quality of life and reproductive success is paramount," he said.

Dr. Michael Schwartz directs robotic and laparoscopic surgery at Northwell Health's Arthur Smith Institute for Urology in Lake Success, N.Y. He said the results of the British study do look promising, but more research is needed.

"This study measured short-term toxicity, which appeared similar between the two groups," Schwartz noted. "Long-term toxicities, and the effects of the different chemotherapy doses on fertility, were not reported in this study, but are expected with longer follow-up of the patients."

Also, not every man with non-seminoma testicular cancer will benefit equally from a reduced dose of chemo, he said.

"The results here have the potential to influence the treatment paradigm for testicular cancer, but it is important to remember that the results only apply to a highly selected patient population," Schwartz said. "All patients with non-seminoma testicular cancer will not necessarily be candidates for this reduced chemotherapy regimen."

The study was published Jan 2 in the journal European Urology.

The American Cancer Society has more on testicular cancer.