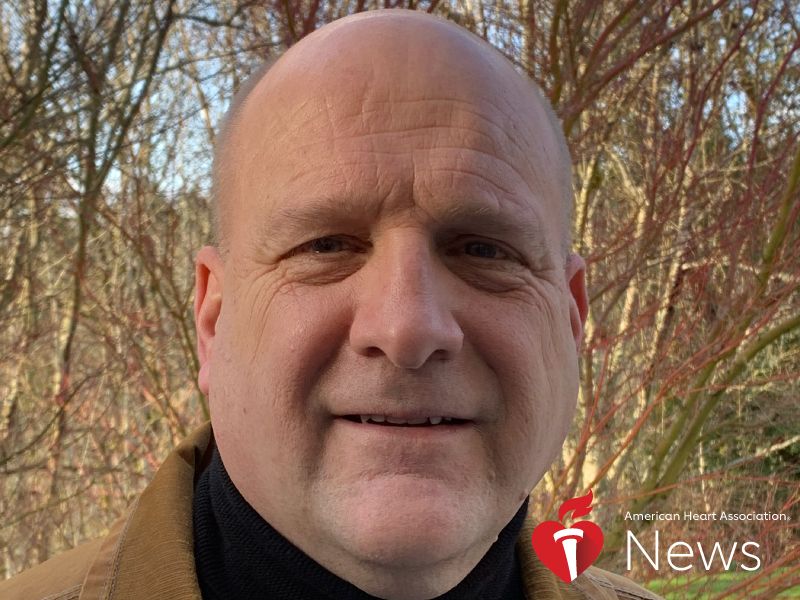 AHA News: Cancer Survivor Feared Recurrence, But This Time It Was His Heart

Doug Cobb popped a couple antacid pills to calm the heartburn he'd been experiencing on and off for weeks. The 60-year-old considered he might have a stomach problem, but waved it off, assuming the burning sensation came from something he'd eaten.

Cobb had another reason for not wanting to see a doctor. A two-time cancer survivor, he tamped down a nagging fear his body was failing him again.

The first time the cancer went into remission, Cobb worried about every ache or odd feeling. He eventually reached the point where he didn't want to keep going to the doctor only to learn that everything was fine.

But on this day, April 4, 2019, he'd had enough. That morning, Cobb had walked about half a mile across the Nike campus in Portland, Oregon, where he works to give a presentation. His chest felt tight and painful. It was enough for him to call his general practitioner.

"I was talking to the intake person about my symptoms and she said, 'You need to call an ambulance and go to an emergency room to get checked out,'" he said.

In the ER, he had two electrocardiograms, a chest-X ray and blood drawn. Nothing obvious showed up. Meanwhile, his symptoms subsided, as they had in the past.

A doctor stopped by to discuss some unusual results from a blood test.

"Please describe for me the pain you've been feeling," the doctor said.

Cobb thought how best to put it into words. Suddenly he didn't need to.

"I don't have to explain it because it's happening now," he told the doctor.

"It was as if someone took a sledgehammer and hit me right in the chest," Cobb said. "It was constant, the way your thumb hurts just after you hit it with a hammer."

Another electrocardiogram revealed the cause: He was having a heart attack.

Cobb was awake during a non-invasive procedure to insert two stents to open up blocked arteries, one in the diagonal branch and another in the left anterior descending coronary artery. At one point, his heart stopped and doctors shocked it back to life.

"Within a few hours of the surgery, I felt better than I had for months," Cobb said.

Only after his frightened teenage daughter visited him in the hospital did he fully absorb the severity of what had occurred, and how lucky he was to have had his heart attack while in the hospital.

The following week, Cobb was back at work part-time and slowly eased into full-time work. He also participated in a six-month cardiac rehabilitation program, where he exercised under supervision.

A track-and-field athlete when he was younger, Cobb had gotten out of shape over the years. He was overweight and took medication for high blood pressure.

Buoyed by a 20-pound weight loss during cardiac rehab, along with the knowledge that he needed to keep at it to stay healthy, he went on a new mission.

As a volunteer for the Leukemia & Lymphoma Society's Team in Training, which assists and encourages people to raise money through athletic events, Cobb decided to practice what he was preaching by signing up for the Pacific Crest Half Marathon in June.

"I feel like an old Camaro with a clean air filter and fuel filter," he said. "Now I'm working on getting the engine back in shape."

His friend and former sister-in-law, Bernadette Augustine, said she's not surprised by his drive.

"The last thing I would have expected was that Doug would have had a heart attack, but now he has this new purpose and wants to help other people along the way," she said. "He's one of the most positive people I've ever known. He wakes up with gratitude every day."

Cobb said several people have voiced concern about him participating in a running event.

"Everyone is worried I'm going to have another heart attack, but my arteries are no longer a problem," he said. "My legs will give out long before my heart."