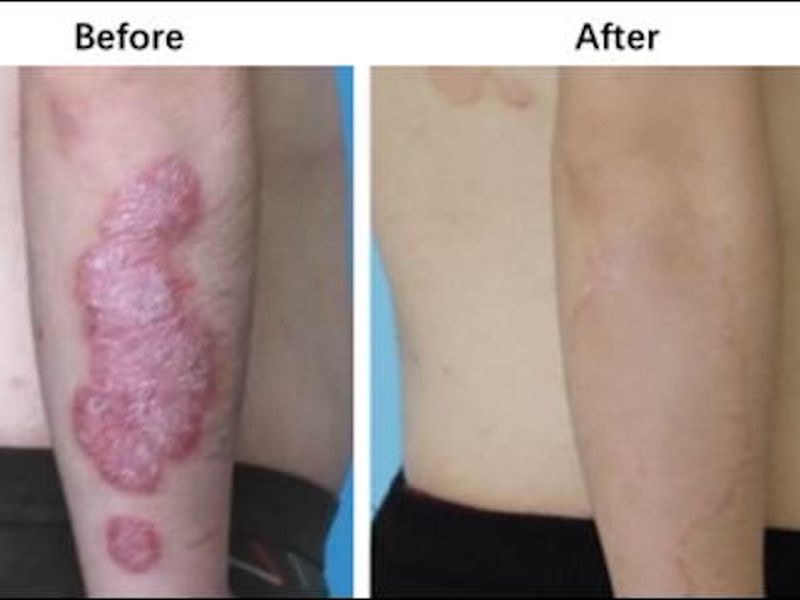 The study involved four patients with severe psoriasis, and researchers are describing it as a "proof-of-concept" — specifically, the idea that targeting certain sensory nerves might help treat the skin disease.

Much more research is needed before the tactic could be used as a psoriasis treatment, experts said.

But for the four patients treated — up to four times over a few months — the lidocaine injections led to a significant reduction in skin symptoms.

Psoriasis is a chronic skin condition that affects more than 8 million Americans, according to the National Psoriasis Foundation. The disease arises from an abnormal immune response that triggers rapid turnover of skin cells, causing them to pile up on the skin's surface.

Most people have a form called plaque psoriasis. They periodically develop red, scaly patches on the skin that can be itchy and painful.

Standard treatments target the inflammation — topical corticosteroids being the most common. For people with more severe psoriasis, some options include light therapy (exposing the skin to natural or artificial light) and injection medications that suppress the immune system.

The researchers decided to try the tactic based on some unusual observations about patients with psoriasis.

That, he said in a written statement, suggests the nervous system might play a "pivotal role" in causing psoriasis.

For the study, Wang's team recruited four patients with severe psoriasis; two had psoriasis patches all over their bodies, while the other two had the condition mainly on their legs. All received epidural lidocaine — where a small, flexible tube is inserted into the lower back to deliver the medication to the fluid-filled space outside the spinal cord.

The researchers treated each patient up to four times, over anywhere from two to five months. In the end, the patients saw the severity of their psoriasis drop by 35% to 70%, based on a standard score that measures the extent of the condition.

The improvement was maintained for at least six months, according to the report, which was published in the August issue of the Journal of Investigative Dermatology.

"I think it's fascinating," said Dr. Alan Menter, a psoriasis expert who reviewed the findings.

"There have been case reports of patients who have neurological issues, and the psoriasis disappears from areas of the skin where there's nerve damage," said Menter, chairman of the dermatology division at Baylor University Medical Center in Dallas.

The reasons why, he added, are not fully clear.

As part of their study, Wang's team also tried to find out why lidocaine was helpful: They induced a psoriasis-like condition in lab rats, then treated some of them with lidocaine. It turned out that the animals had excessive sensory nerve growth in psoriasis-affected areas of the skin — and lidocaine treatment reduced that. The medication also inhibited nerve cells from releasing a protein called CGRP, which can fuel inflammation.

Many questions remain to be answered, however. No safety issues came up in these four patients, but researchers stress the need for larger studies to put epidural lidocaine to the test against a placebo (an inactive substance).

If the treatment does prove safe and effective, it might offer an option for psoriasis patients who do not get relief from standard treatments, according to Wang.

In the real world, though, practicality is an issue. In this pilot study, each lidocaine treatment involved four to seven injections, at one-hour intervals.

Menter noted that epidural lidocaine is not the easiest therapy to give or receive.

"I don't think the average dermatologist could do this," he said.

Still, Menter said that studies of the nervous system's involvement in psoriasis should continue. They could lead to a better understanding of the causes of the condition, and possibly more treatments.

The American Academy of Dermatology has more on psoriasis.