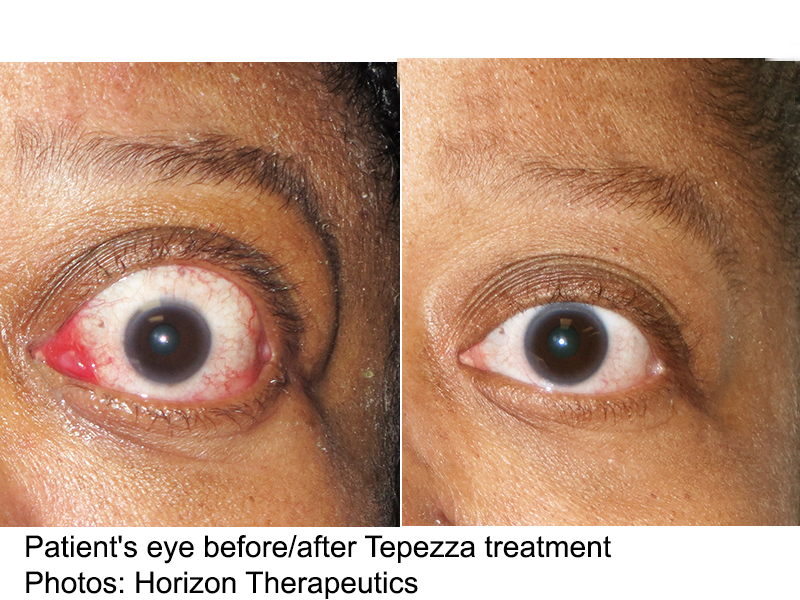 "This may be a drug that offers a new approach and a paradigm shift," said Dr. Raymond Douglas, lead author of a study the FDA considered when making its final decision. "Currently, we use supportive therapy for people with thyroid eye disease, but their quality of life is diminished by their symptoms.

"Teprotumumab was extraordinarily effective. We hope that people with thyroid eye disease won't have to suffer as they have in the past. With treatment, they're not going to be blind. They're not going to be disfigured. They can even watch their kids playing soccer when it's windy," Douglas explained. (Without treatment, wind could be too drying to the eyes.)

In people with the condition, inflammation in the back of the eye causes the eyes to bulge. The swelling may also squeeze the optic nerve, causing vision problems, said Douglas, a professor of surgery in the division of ophthalmology at Cedars-Sinai Medical Center in Los Angeles.

Thyroid eye disease typically develops in people with an overactive thyroid gland caused by Graves' disease. The disorder can cause redness, swelling and a gritty feeling in the eyes, the American Thyroid Association says. It can also cause dry eyes or excessive tearing, double vision and sensitivity to light. One of the most noticeable symptoms is bulging of the eyes, and it may be difficult to completely close the eyes.

Because thyroid eye disease is rare, the FDA gave this drug "orphan drug" status. This means companies are provided incentives to encourage the development of drugs for rare diseases. The medication was also given the FDA's priority review, fast track and breakthrough therapy designations to assist the manufacturer in bringing the drug to market.

The drug's approval was based on results of two studies that included 170 people with active thyroid disease. The most recent study was a phase 3 clinical trial released Jan. 22 in the New England Journal of Medicine and led by Douglas. This study included more than 80 people with active thyroid disease who were randomly assigned to receive either teprotumumab or a placebo.

The drug was administered intravenously once every week for three weeks over a 21-week period. Douglas said the IV infusions take about an hour.

Teprotumumab started working after just two doses, Douglas said. After 24 weeks, 83% of people on the drug had a measurable reduction in eye bulge -- more than 2 millimeters -- versus just 10% of those on a placebo.

Douglas said treatment with the drug reversed double vision as well as surgery does.

Side effects were minimal and well-tolerated, according to Douglas. Some of the more common side effects included muscle cramps, nausea, hair loss and fatigue. The drug should not be used in pregnancy.

Dr. Harsha Reddy, an ophthalmic plastic surgeon at New York Eye and Ear Infirmary of Mount Sinai, wasn't involved in the current study, but is familiar with the findings.

"I believe this will be a revolution in treating thyroid eye disease," he said.

"Until now, [doctors] could only wait until thyroid eye disease had taken its toll on their patients, and both patients and physicians were frustrated by the lack of treatment options during that waiting period," Reddy explained.

"Now, for the first time, physicians will have the option of treating thyroid eye disease in its early phase and preventing many of the devastating eye changes from occurring in the first place," Reddy added.