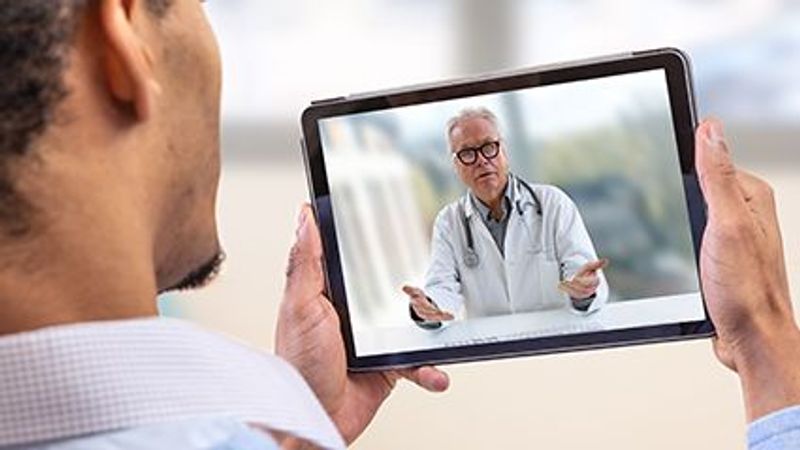 Telemedicine rapidly expanded during the COVID-19 pandemic as people turned to their phones and computers rather than leave their homes for health care.

But some groups of people were left behind in the telemedicine boom, a new study reports.

Middle-aged and older folks are much less likely to complete their scheduled telemedicine visits, as well as Medicaid recipients and those whose first language is not English, the researchers said.

Many groups are also unable to take part in video visits, including middle-aged folks and seniors, women, Black and Hispanic people, and those with a lower household income, according to the study authors.

The pandemic has revealed a "digital divide" in telemedicine care, with some people unable to take full advantage of the service because they either lack access to the technology or find it too daunting, said lead researcher Dr. Srinath Adusumalli. He's a cardiologist and assistant professor of clinical medicine with the Hospital of the University of Pennsylvania, in Philadelphia.

"Lots of the care we've historically delivered in person can be done via telemedicine, and therefore I do think telemedicine is here to stay," Adusumalli said. "Our goal now is to start refining that process."

For this study, Adusumalli and his colleagues surveyed records for nearly 150,000 patients who scheduled telemedicine visits with Penn Medicine between mid-March and mid-May, 2020, at the height of the pandemic's first wave.

Only 54% of those who scheduled a telemedicine visit actually followed through and completed it, the researchers found.

Further, only about 46% of those who used telemedicine had a visit conducted via video, which is generally considered the best, Adusumalli said. The rest had phone visits.

Age played a large part in whether a person would complete a telemedicine visit or use video during their visit:

Video allows doctors to visually examine a patient, check out their surroundings, and look directly at either medications they are taking or the results from self-monitoring devices like blood pressure cuffs or glucometers, Adusumalli said.

"The common wisdom is that video is always best, but I think it's best in certain clinical situations," Adusumalli said. "Having conducted many home medicine visits myself, I do agree video makes the encounter richer. It allows you to connect more with the patient."

Adusumalli thinks there are several factors that could be contributing to the gap in access to telemedicine.

Many people don't have access to good broadband service, either wired or wireless, or might have a phone or computer that doesn't support video, he said.

Others might lack the technical ability to install a telemedicine program or app to their device, register it and run it properly.

"The systems we use need to be as simple as possible," he added.

Adusumalli noted that his hospital's video vendor has refined their software to the point that people don't need to download an app. Instead, they can access telemedicine directly from their computer or phone's web browser.

"That removes another barrier, and we hope that will increase the accessibility of video visits," Adusumalli said.

Telemedicine visits accounted for about 35% of primary care visits between April and June, according to a Johns Hopkins study published in JAMA Network Open in October.

"Telehealth is definitely not ideal. It beats nothing, but in terms of trying to really evaluate patients, especially those with chronic health problems, it does make it more difficult," said Fincher, a primary care provider in rural Georgia.

Video does help in a telemedicine assessment, Fincher said, but she added that many folks in rural areas simply don't have access to either broadband or a device with a good camera.

"In private practice, we know our patients. They've been with us a long time. When my patient's not doing well and I've been treating them for 30 years, I can look at them and tell they're not doing well or they're sick," Fincher said of video.

However, self-monitoring devices like blood pressure cuffs, glucometers and accurate scales probably are even more important in delivering good remote care, she said.

"Every day in my life I treat hypertension, diabetes and heart failure, so having those self-monitoring devices is extremely helpful in helping determine what we need to address," Fincher said.

Insurance companies should cover the cost of these devices, which can help head off medical emergencies among people with chronic conditions, she added.

"All it takes is one ER visit and you've blown the budget," Fincher said. "If it saves one ER visit, you've paid for hundreds of blood pressure monitors."

The AARP has more about using telemedicine.