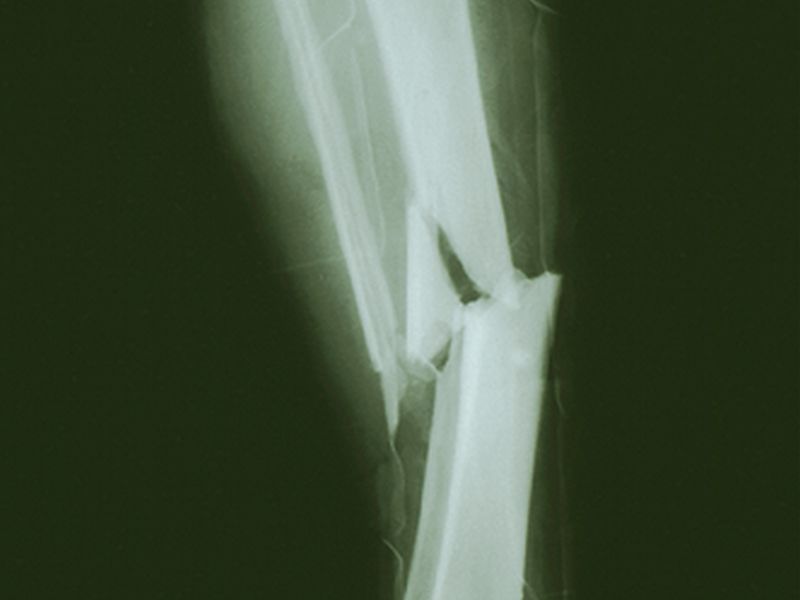 An experimental drug may help build bone mass in some adults with a rare brittle-bone disease, a small preliminary study suggests.

The disease is called osteogenesis imperfecta. It's caused by defects in certain genes involved in making collagen -- a key protein in the body's connective tissue. Osteogenesis imperfecta (OI) is present at birth, and may leave children with soft bones that are deformed or break easily -- though the severity of the condition ranges widely.

While experts have known the culprit genes involved in osteogenesis imperfecta, the new study points to a mechanism in the disease process: overactivity in a protein called TGF-beta.

And when the researchers infused eight adult patients with a drug that inhibits the protein, five showed an increase in bone density.

The findings are preliminary, and much work remains ahead, stressed researcher Dr. Brendan Lee, a professor of molecular and human genetics at Baylor College of Medicine in Houston.

"One has to be cautious," he said, "because more bone does not necessarily mean better bone."

But the broader hope is that by understanding the mechanisms of OI, better treatments -- possibly with benefits outside the bone -- can be developed, according to Lee.

"This is not only a bone disease," he said. "This is a connective tissue disease."

Depending on the severity of the condition, people can also suffer unstable joints, weak muscles, skin that bruises easily, hearing loss or underdeveloped lungs.

At this point, Lee said, it is unknown whether the drug used in this study, called fresolimumab, can affect those kinds of symptoms.

Osteogenesis imperfecta is rare, occurring in 1 out of every 10,000 to 20,000 births worldwide, according to the U.S. National Institutes of Health.

There are no medications approved by the U.S. Food and Drug Administration specifically for the disease. But osteoporosis medications called bisphosphonates are a mainstay of treatment for children with osteogenesis imperfecta.

The drugs can increase kids' bone density and help them be more active, said Dr. Cathleen Raggio, a pediatric orthopedic surgeon at the Hospital for Special Surgery in New York City.

But bisphosphonates are not specifically designed for OI. That means they target a symptom and not the disease process itself, said Raggio, who researches and treats osteogenesis imperfecta.

She agreed that having medications that target a "pathway" in the OI process could "treat the core problem, rather than symptoms."

Raggio, who was not involved in the new study, said she was "cautiously optimistic" about the findings. But like Lee, she stressed that much more work has to be done.

Larger studies of adults are needed, Raggio said, to look at the safety and longer-term effectiveness of fresolimumab -- and to better understand why some patients may respond, while others do not.

The study, published recently in the Journal of Clinical Investigation, involved two parts. First, the researchers analyzed bone tissue samples from a small group of children with and without the brittle bone disease.

In previous research, Lee's team had found that TGF-beta "signaling" is ramped up in lab mice with an OI-like condition. So they wanted to see whether that was true in human OI-affected bone.

It turned out that was the case.

Next, the researchers gave eight adult patients a single infusion of fresolimumab -- a lab-engineered antibody that inhibits TGF-beta. The drug has been under study as a treatment for certain cancers, among other conditions.

In bone, Lee explained, TGF-beta appears to be a "master orchestrator" of remodeling -- the continual process by which old bone is broken down and new bone is formed.

He and his colleagues found that five patients with more moderate OI showed increased bone density in the three to six months after the fresolimumab infusion. The three remaining patients, who had more severe disease, showed either no change or a decline in bone density.

Past research of fresolimumab for other conditions has turned up some potential risks, including bleeding and skin tumors.

In this study, patients had no serious side effects from the single infusion, according to Lee's team.

The research was supported by the Brittle Bone Disorders Consortium, and a research agreement with Sanofi Genzyme, the maker of fresolimumab.

The company will lead a larger trial of adults with osteogenesis imperfecta, to further test the drug's safety and effects on bone.

If adult studies prove positive, then the question will be whether the drug can benefit children with OI, too -- possibly added onto bisphosphonates, Raggio said.

For now, she said, parents should know that researchers are working on understanding the mechanisms of the disease, and translating that to treatment.

No one is saying fresolimumab, or any single drug, will be the answer to a complex disease like OI, Lee noted.

"Rarely in medicine does one size fit all," Lee said.

The OI Foundation has more on osteogenesis imperfecta.