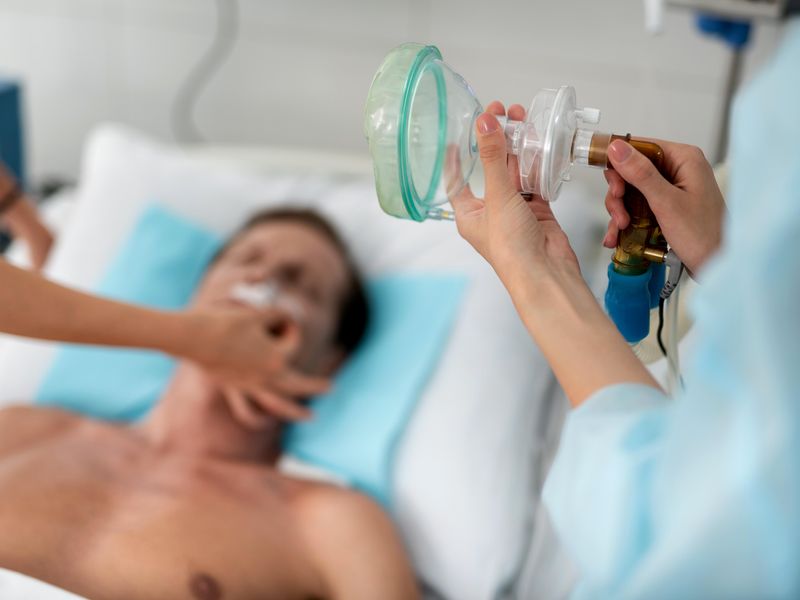 It remains one of the most painful images of the pandemic: Families who were not allowed to be by their loved ones' bedside as they waged a lonely battle against COVID in a hospital ICU, with some forced to say goodbye via a smartphone or tablet held by a compassionate nurse who didn't want a patient to die alone.

Now, new research suggests that many of those relatives went on to develop post-traumatic stress disorder (PTSD).

The finding is based on interviews conducted among 330 men and women, all of whom had loved ones admitted to the intensive care unit (ICU) as COVID-19 patients in the first few months of the pandemic.

The investigators found that more than six in 10 displayed "significant" signs of PTSD three to four months after their loved one's initial hospital admission. And almost half of them continued to struggle with PTSD up to six months later, alongside a relatively high risk for both anxiety and depression.

The researchers pointed out that PTSD is typically seen in only 15% to 30% of family members of loved ones admitted to an ICU for any cause.

"It was remarkable to us how prevalent the symptoms of PTSD were in these family members," said study author Dr. Timothy Amass. He is an assistant professor of medicine in the division of pulmonary sciences and critical care medicine at the University of Colorado School of Medicine in Aurora, Colo.

Family members indicated that much of their stress stemmed from hospital rules that prevented them from being by their loved one's bedside. That, said Amass, gave rise to feelings of distrust concerning the care being provided and frustration at being asked to simply take medical information "at face value" absent an ability to visit the person in the ICU.

In fact, Amass said that his study team launched its investigation out of concern "that the necessary restriction in visitation would have profound impacts on the family members who were unable to be with their loved ones."

That concern, he noted, was based on pre-pandemic research "that has indicated that the more involved a family can be at the bedside of their loved ones admitted to the ICU, the better it is, in that it can reduces stress symptoms of the family members."

All of those interviewed had family members admitted to an ICU at some point between Feb. 1 and July 31, 2020, according to the report.

On average, those interviewed were 51 years of age, and nearly seven in 10 were women. About half were white and nearly 30% were Hispanic.

In about 40% of cases, the interviewees were the child of the admitted patient; in about one-quarter of cases they were the patient's spouse or partner.

Beyond finding that 63% struggled with significant PTSD several months post-admission, Amass noted that women, those with a prior psychiatric diagnosis, and those with relatively low levels of educational achievement were more likely to develop PTSD.

In addition, Amass said, the researchers found "that those who identified as Hispanic were more likely to have higher symptoms of PTSD at three and six months." He characterized that finding as "novel," with the team hypothesizing that those in the Hispanic community may be particularly used to providing bedside care for sick loved ones, and therefore they become more distressed when that becomes impossible.

Broadly speaking, Amass said the findings highlight how disconcerting forced separation can be for family members, whether the underlying reason is COVID-19 or infection-related or due to work obligations, child care time constraints or physical distance.

"Awareness of the importance of this separation from the patient may help individuals and the medical community be proactive in finding creative ways to engage family members to help mitigate the challenges of these scenarios," he suggested.

The report was published online April 25 in JAMA Internal Medicine.

According to Dr. Jeffrey Borenstein, president and CEO of the Brain & Behavior Research Foundation in New York City, "Having a loved one seriously ill and requiring treatment in an intensive care unit is extremely stressful."

While not involved in the study, Borenstein agreed that "during the pandemic, when so many people were dying from COVID, having a relative in the ICU for treatment was especially stressful. Adding to the stress were the understandable rules limiting visits, which made it even more traumatic."

His advice: "During a time of high stress, make use of your support system - friends and family - and if needed, professional support. And if you are experiencing symptoms of PTSD, do not suffer in silence. Seek professional help."

There's more on COVID-19 and stress at U.S. Centers for Disease Control and Prevention.