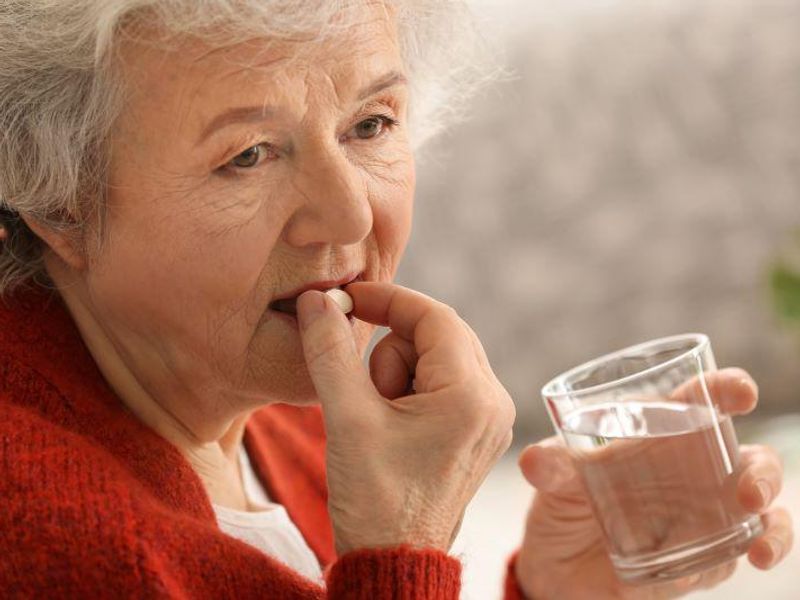 A dietary supplement believed to protect against Alzheimer's disease might instead be potentially harmful to the brain, a new study warns.

L-serine is an amino acid that serves many different roles in the body, and one is to influence the development and function of synapses in the brain.

Clinical trials are underway to test serine supplements in older adults experiencing cognitive decline, researchers said, based on the thought that a lack of serine might fuel development of dementia and Alzheimer's disease.

But new findings suggest the opposite is true -- elevated serine levels might instead contribute to Alzheimer's disease, researchers reported May 3 in the journal Cell Metabolism.

This scientific controversy revolves around an enzyme called PHGDH, which is a key ingredient for production of serine in the brain.

A Cell Metabolism study published in 2020 had argued that PHGDH levels are lower in the brains of Alzheimer's patients, and suggested that L-serine tablets could be a "ready-to-use" therapy for Alzheimer's, the new report's authors said in background notes.

"You can buy it on Amazon," Chen said of L-serine. "The rationale behind it is simple. They're saying it supports your brain function, because it's one of the components of your neuronal receptors."

However, research by Chen and her colleagues revealed that there's actually a steep increase in PHGDH among Alzheimer's patients, as well as in healthy people approximately two years before they were diagnosed with the disease.

Chen's team analyzed genetic samples taken post-mortem from the brains of people in four different research groups, each made up of 40 to 50 people ages 50 and older. The subjects consisted of Alzheimer's patients, people without cognitive problems whose brains showed early signs of Alzheimer's-related changes, and folks with healthy brains.

The researchers found a consistent increase in PHGDH among both Alzheimer's patients and people with early signs of Alzheimer's, compared to the healthy control group.

What's more, PHGDH levels rose higher as a person's Alzheimer's became more advanced, both in physical degeneration within the brain as well as in worsening test scores of a person's memory and thinking ability, the researchers said.

They believe that while PHGDH serves as an important enzyme in early brain development, as you grow older the enzyme might actually overstimulate synapses and burn them out if there's too much in the brain.

"We think this is a metabolic stress issue happening in the brain," Chen said. "Either environmental stress or a predisposition of the brain to neurodegeneration might induce an increase in this enzyme, to ramp up neuronal firing capacity by making more serine.

"But in the end, the neuron goes crazy, causing hyperactive excitability or excitotoxicity," Chen continued. "It creates a lot of stress in the brain that leads to neuronal death."

In fact, the researchers are concerned that a vicious cycle or snowballing effect occurs, where the brain keeps producing more and more PHGDH to counter the loss of brain activity that happens when too much PHGDH kills off neurons.

"If we can find a way to restore balance prior to the snowball happening, we might have a chance to slow down the disease," Chen said.

That means PHGDH could be a potential target for future Alzheimer's drugs, Chen said, noting that a number of drugs already target the enzyme due to its role in cancer.

"The cancer field has been trying to inhibit this enzyme for a long time, so there's a whole repertoire of compounds known to be PHGDH inhibitors," Chen said. "We are very excited to try to repurpose some of these PHGDH inhibitors as a potential therapy for Alzheimer's disease."

PHGDH levels also might prove a powerful biomarker for predicting which people are at increased risk for Alzheimer's disease as they age, Chen added.

The new study shows that "using serine as a therapy for Alzheimer's disease might not be the greatest idea," said Percy Griffin, director of scientific engagement for the Alzheimer's Association.

"Also, serine does not just act in the brain. It has other functions in other parts of the body, so taking it as a supplement might have undesirable side effects," said Griffin, who was not part of the study.

"For example, serine plays roles in other organs, such as the kidneys and the cartilage," he said. "Having too much of it in those other organs might lead to effects you don't want."

Griffin said people interested in taking L-serine for brain health should discuss the matter with their doctor.

"It's always good to have that conversation to ensure that it's OK to take any supplement," Griffin said.

The Alzheimer's Drug Discovery Foundation has more about L-serine.