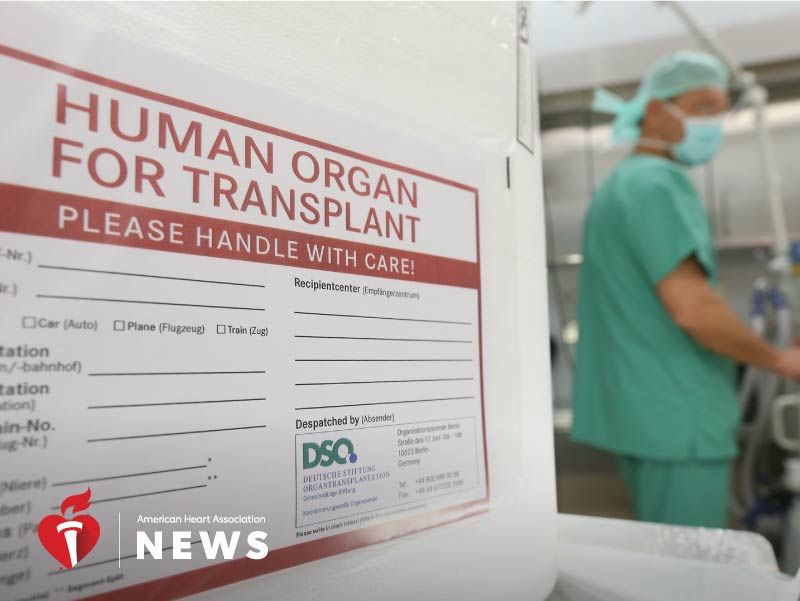 Researchers say the ever-growing waiting list of hopeful heart transplant recipients could be trimmed down if only more patients were given the option to open their hearts to unlikely donors.

Two new Stanford University-led studies published Dec. 4 explore opportunities to expand the donor pool by using hearts that many transplant centers overlook: those that once belonged to people who had an active hepatitis C infection, and to those who were obese.

The number of heart transplants has risen steadily over the past decade. More than 100,000 Americans are sick enough to need a heart transplant, but in 2017, only 3,244 actually received one.

"In order to meet the recipient demands of heart transplantation, we need to consider out-of- the-box strategies to expand the donor pool," said Dr. Yas Moayedi, lead author of a study published in the American Heart Association's journal Circulation: Heart Failure that looked at using hearts from donors who tested positive for hepatitis C.

Researchers used a national registry of organ transplants and analyzed 2014-2017 data on 1,306 heart donors with hepatitis C, a blood-borne virus than can be effectively treated with antiviral medication.

They found only 5 percent of these infected hearts were used in transplants. Yet, those heart recipients had no difference in survival within the first year of transplant compared with patients who received hearts from donors without hepatitis C. Longer-term data is needed to confirm if the positive results persist.

The number of hepatitis C-positive donors has increased steadily since 2014, along with deaths attributed to drug overdoses related to the nation's opioid epidemic, researchers noted in the study. Heroin addicts often share needles, contributing to the rise of hepatitis C infections.

Because the opioid epidemic has predominantly affected young adults, the average age of heart donors with hepatitis C has dropped in the last five years from 47 to 35, the study found.

The younger age means these donors usually have fewer health problems associated with older donors, like high blood pressure or diabetes, and would normally be considered "incredibly viable" candidates outside of the hepatitis C, said Moayedi, a postdoctoral fellow at Stanford University in California.

In a separate study released in the Journal of the American Heart Association, researchers found a similar positive outcome for patients who received their hearts from donors who were obese.

Transplant centers reject the hearts of obese donors mainly because they believe such grafts are inferior, even though little evidence supports that idea, said Dr. Yasuhiro Shudo, the lead author of the study and an assistant professor at Stanford University School of Medicine.

Those centers may soon not have a choice.

"We're seeing a (high) prevalence of obesity in the general population," said Shudo, pointing out that about one-third of U.S. adults are obese. "As we see more obese people, this will lead to having more obese donors in the future."

Using the same national transplant registry as the other study, the researchers examined data on 31,920 adults who received heart transplants from 2001 through 2016 and separated the donors into four groups based on their body mass index, or BMI, a ratio of weight to height often used to calculate overweight and obesity.

Of all transplant patients, about 41 percent received a heart from donors with a normal BMI. The other patients received hearts from patients with a BMI classifying them as overweight (35 percent of total donors), obese (15 percent) or extremely obese (9 percent).

The researchers found no significant difference in overall survival among the four groups.

Dr. Michael Givertz, a Harvard Medical School professor who was not involved in either study but wrote an editorial that accompanied the report about hepatitis C donors, said both studies examine "this large potential opportunity to access donor organs that would otherwise not be used."

He said more research is needed to explore the impact of using hearts from donors with hepatitis C, but overall both studies offer tremendous potential and promise.

"There are patients who never make it to transplant because they die on the waiting list. And there are opportunities here to offer them an organ and a successful transplantation," said Givertz, medical director of the heart transplant and mechanical circulatory support program at Brigham and Women's Hospital in Boston.

The key is educating patients about the potential risks of using unconventional donors and weighing those risks against waiting even longer, possibly indefinitely, on the transplant list.

"Once the recipient and their families understand the relative balance of these risks, I've found, and many colleagues have found, that most people are willing to move forward," Givertz said.