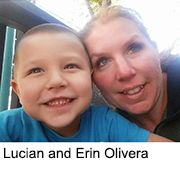 Isolated and afraid, Erin Olivera cast about the internet looking for information about the mysterious paralysis that had stricken her 11-month-old son Lucian.

She found next to nothing. No clear reason why over the course of a weekend in 2012 her boy went from a happy active toddler to utterly immobile and barely able to breathe.

It took a year before Olivera found out that Lucian had developed acute flaccid myelitis (AFM), a mysterious polio-like illness that has been striking the United States in every-other-year waves.

The group's membership has steadily grown, as subsequent waves have brought AFM case counts into the hundreds, Olivera said.

As of last week, the Facebook group had more than 600 members, Olivera said.

"I never wanted another family to have that feeling of just not knowing," Olivera said. "It's turned out to be quite a resource for families."

AFM causes potentially life-threatening paralysis, since it can slow or stop breathing. There's yet no known cause, although public health officials suspect one or more viruses could be triggering the condition.

So far in 2018, the U.S. Centers for Disease Control and Prevention have confirmed 158 cases of AFM across 36 states -- the most ever verified.

Lucian fell ill before these waves were even being tracked and confirmed, before AFM was considered a possibility.

Olivera, a registered nurse in Simi Valley, Calif., had returned home from a night shift on a Friday morning in 2012 to find that her son was dragging his left leg while he crawled.

She took her son to an ER, where doctors there told her the boy had a hip infection.

Over the weekend, Lucian's pain and paralysis grew worse, despite repeated medical visits.

"I was walking by his crib and I stopped because he wasn't moving his head or his body," Olivera said. "When I went over to him, he was only following me with his eyes. He wasn't lifting his arms up for me. He wasn't trying to sit up."

Her pediatrician told her to get to the nearest children's hospital as fast as she could. On the way, Lucian stopped breathing twice for a few seconds, and required oxygen upon arrival at the hospital.

Lucian spent weeks in the hospital, followed by extensive physical therapy. Still, Olivera had no idea what had happened to her son.

Then in 2013, a small 12-case outbreak of AFM occurred in California. "I saw it pop up on my internet browser, and I knew right then and there, this is what my son has," Olivera said. A Stanford doctor confirmed the diagnosis.

The first CDC-noted wave of AFM struck in 2014, and that's when Olivera decided to start her Facebook group.

"The 2014 cases came and I thought, you know maybe if some parents found the website it would give them some peace of mind to know that they weren't alone," Olivera said.

People have to apply to join the group, and must either be a parent or caregiver of a child with AFM, Olivera said.

"It's not a place for physicians or rehab therapists. It's just a safe place for parents," Olivera said.

That's not to say there are no doctors in the group. Dr. Riley Bove, a neurologist with the University of California, San Francisco, has an 8-year-old son with AFM and is a member.

Groups like Olivera's are an important part of spreading the word about AFM, Bove said.

"Parent groups and doctor groups have really been upping awareness," Bove said. "A kid really needs to make it through their parents' awareness and their local doctors' awareness before they can be seen by a neurologist and diagnosed with AFM."

People who join the Facebook group first want to know if their child is going to recover, and how soon, Olivera said.

There's not much good news on that front, Bove said.

"Most kids do not recover completely," Bove said. "Typically, the first thing to go is the last thing to come back, or it doesn't come back at all."

Olivera considers Lucian fortunate. Now 7, Lucian still has braces on both legs. His left leg remains fully paralyzed, but his right leg has regained about 85 percent of its function. He never needed to be put on ventilation.

"I always look at Lucian as a very lucky case," Olivera said.

Parents who think their children might have AFM need to "trust your voice," Olivera said.

"If your gut is telling you this doesn't feel right, and the doctor keeps telling you it's nothing, go to a second hospital," Olivera said. "Get another hospital involved."

She urges parents of children diagnosed with AFM to reach out to her Facebook group.

"Let us help you get things in place for when your child comes home," Olivera said. "We have a lot of experience to share."

The U.S. Centers for Disease Control and Prevention has more about acute flaccid myelitis.