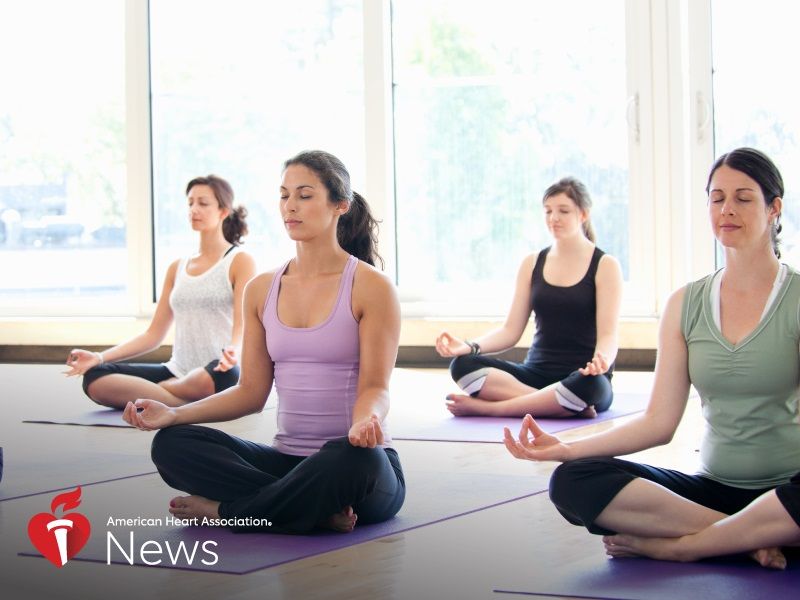 AHA News: Is Yoga Heart-Healthy? It's No Stretch to See Benefits, Science Suggests

For years, aerobic exercise has been touted for its numerous health benefits, including improved cardiovascular health, better mood, increased energy, and stronger bones and muscles. But there's another form of physical activity that's grabbing headlines -- yoga.

Some studies suggest the mind-body practice may be good for heart health, from reducing blood pressure and cholesterol to lowering stress and body mass index.

While yoga often is associated with images of limber practitioners, it is more than just stretching and handstands. Originated in India, yoga includes physical poses (asana), breathwork (pranayama) and meditation. There are many yoga styles, including Hatha, Iyengar, restorative and hot yoga, each with a specific emphasis such as alignment or relaxation.

Recently, more Americans are stepping onto the mat. According to the Centers for Disease Control and Prevention, 14.3 percent of U.S. adults -- or 35.2 million -- practiced yoga in 2017, up from 9.5 percent in 2012. Many take up the practice as a holistic approach to health and wellness, and for its stress-busting effect.

"There's a huge body of literature that says psychosocial stressors such as work and marital stress, as well as anxiety and depression, are associated with increased risk for cardiovascular disease," said Dr. Puja Mehta, an assistant professor of medicine in the division of cardiology at Emory University School of Medicine in Atlanta. "With chronic stress, the sympathetic nervous system is in overdrive," which can lead to inflammation and increased blood pressure.

Yoga may help put the brakes on the body's stress response by activating the parasympathetic nervous system, or the "rest and digest" system, through deep breathing and relaxation, Mehta said. Cultivating mindfulness also may encourage participants to engage in other habits that boost cardiovascular health by promoting self-awareness and self-care behaviors.

"(This) can have a profound effect on supporting the engagement of healthy behaviors of diet and physical activity," said Dr. Gloria Yeh, associate professor of medicine at Harvard Medical School and director of mind-body research at Beth Israel Deaconess Medical Center in Boston.

Research also shows yoga may lower cardiovascular risk factors. Yeh coauthored a 2014 review of clinical research published in the European Journal of Preventive Cardiology that found yoga had a significant impact on cardiometabolic risk factors compared to doing no exercise at all.

For example, yoga decreased total cholesterol by 18.48 mg/dl and triglycerides by 25.89 mg/dl more than the change seen in the control group. Blood pressure improved too. Systolic and diastolic blood pressure decreased 5.21 mmHg and 4.98 mmHg, respectively.

The benefits also extend to people with heart disease. Among people with paroxysmal atrial fibrillation, in which symptoms come and go, doing 12 weeks of yoga combined with deep breathing resulted in a lower heart rate, lower blood pressure and higher mental health scores compared to those who didn't do yoga, according to a 2016 study published in the European Journal of Cardiovascular Nursing.

Mehta said although these and other scientific studies show promising results, there are some limitations, such as a small number of participants. In addition, because yoga encompasses a variety of elements, there isn't a standard dose of yoga, which makes comparisons across studies difficult, she said.

Both Yeh and Mehta said more research is needed, including more randomized clinical trials and a better understanding of the exact mechanism behind yoga's cardiovascular benefits.

"We need to better understand for whom yoga may be more beneficial and how," Yeh said. "Because yoga is so heterogeneous with many different styles and emphases, we'd like to be able to match the right exercises with the right people at the right time. We need to understand how best to integrate yoga with other lifestyle measures."

And the biggest research question remains, Mehta said: "Are you going to live longer and not have cardiovascular events like heart attack or stroke?"

For older adults and people new to yoga, Mehta recommends looking for gentle, restorative or chair-based classes. People with heart disease or high blood pressure may need to modify some poses and avoid postures that place the head below the heart, she said. Experts also suggest pregnant women in particular steer clear of "hot yoga," or yoga classes that take place in a heated room, because of the risk of overheating and dehydration.

The bottom line, Yeh said, is that yoga is exercise and "any exercise is better than no exercise, so the activity that someone will do -- and enjoy doing -- will be the one that provides the most benefit."