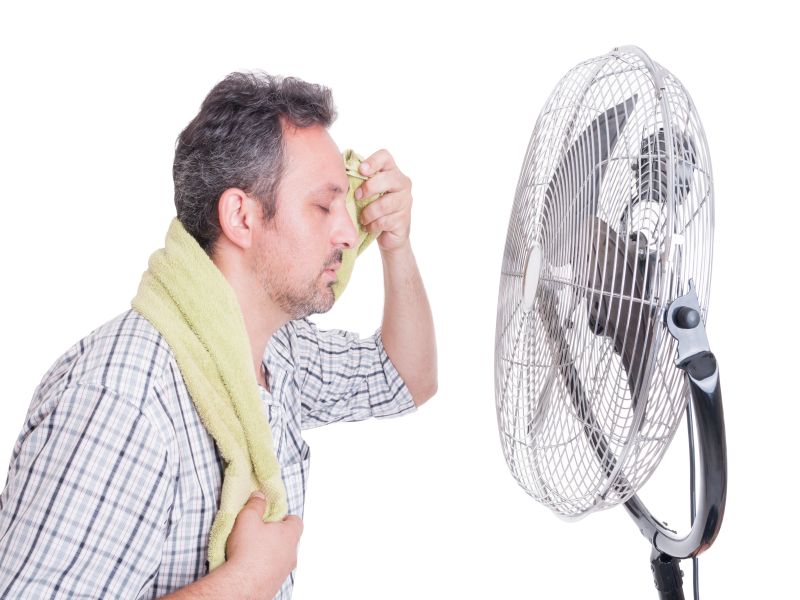 In Heat Waves, Fans May Do More Harm Than Good

Thinking of picking up an electric fan to help keep you cool and protect your health during the next heat wave?

Electric fans might make you feel cooler, but they can actually increase your risk of becoming heat sick and even dying from a heat stroke, the evidence shows.

"The fan actually will be blowing air that is hotter than our body at us," said co-author Mike Clarke, director of the Northern Ireland Clinical Trials Unit at Queen's University Belfast.

It's like switching on an electric oven's convection fan to speed up the cooking process, the researchers said.

Meanwhile, another new study found that electric fans are particularly dangerous during very hot and dry conditions, but can help lower core temperatures and heart strain in hot, humid weather. That study appears in the Aug. 5 issue of the Annals of Internal Medicine.

Electric fans are seen as a cheap way to help people cope with the several days of high temperatures that make up a heat wave, researchers for the Cochrane review said.

Global warming means heat waves will become more frequent, and they can have terrible health consequences.

The Cochrane review team found that there's not a lot of research related to the effectiveness of electric fans, even though they've been around for well over a century. No studies at all met their review criteria, which were looking for experiments directly comparing electric fans with no fans.

They did find several studies that had looked at the effectiveness of cooling options employed during heat waves, however.

These studies had mixed results, with some suggesting that an electric fan might increase the risk of dying during a heat wave.

Fans don't cool us down by circulating cooler air, Clarke noted. The air moving through a fan is the same temperature as the surrounding environment.

Instead, they cool us by speeding up evaporation of our sweat. That means fans also are causing our bodies to lose water faster.

According to Dr. Teresa Amato, head of emergency medicine at Northwell Health's Long Island Jewish Forest Hills, in Forest Hills, N.Y., "If you sweat more and don't replace it quickly with fluids, there is a theoretical increased risk of dehydration, which could potentially put a person at greater risk for heat stroke or heat-related illness."

If the ambient air is warmer than the human body, then the air blowing from the fan could actually increase a person's core temperature, the researchers explained.

One condition was very hot and dry, the same as the peak conditions of the July 2018 California heat wave, with a heat index of about 115 degrees Fahrenheit.

The other condition involved a hot, humid day with a heat index of 133 degrees Fahrenheit, similar to a July 1995 heat wave in Chicago.

The experiment showed that electric fans lowered volunteers' core temperature and heart strain in the humid condition, but were detrimental in weather that was less hot but very dry.

"Bottom line is that during a heat wave, the safest thing is to be in a cool, air-conditioned area," Amato said. "If that is not possible in your own home or dwelling, you should seek out 'cooling stations' throughout your community. Once there is an alert that a heat wave is coming, many local health departments work to identify these safer alternatives and will use places such as libraries and schools."

People who stay home and rely on an electric fan should remain aware of signs of heat-related illness, such as nausea, muscle cramps or headaches, she said.

"Be mindful to check on elderly neighbors who might not have working air conditioners and are relying on electrical fans," Amato added. "They are at a much higher risk and they may not show signs of heat-related illness until they are critically ill."

The U.S. Centers for Disease Control and Prevention has more about heat-related illnesses.