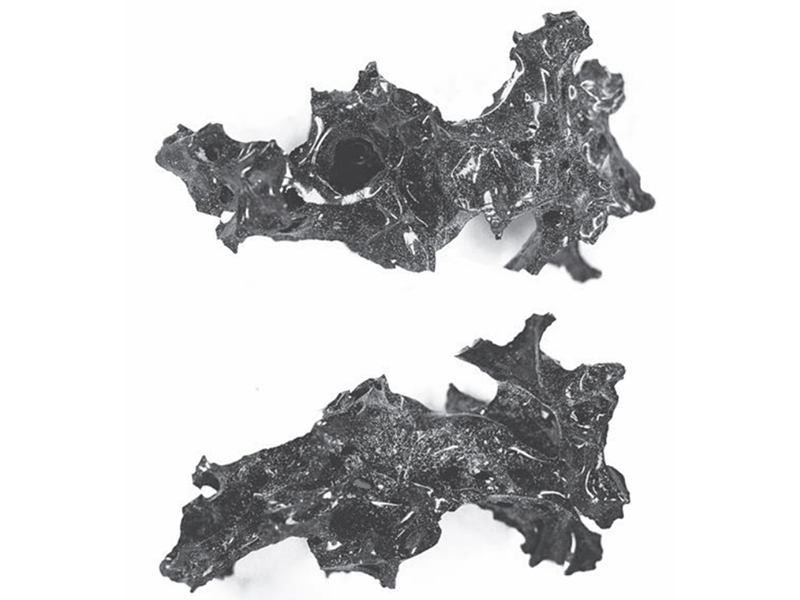 Archaeologists working at the site of Herculaneum -- the other city wiped out in the eruption, alongside Pompeii -- discovered small bits of black glass inside the skull of one of the victims.

"In archaeology -- as well as in more recent times -- the preservation of brain remains is an extremely rare find, but this is the first-ever discovery of ancient human brain remains, vitrified by heat at about 950 degrees Fahrenheit during a volcanic eruption," Petrone said.

Petrone has been researching victims of Vesuvius since the mid-1990s, when the director of the archaeological site asked him to excavate and study 80 victims discovered within several seafront chambers located on the town's beach.

The 79 A.D. eruption of Vesuvius was the first volcanic eruption ever to be described in detail. Greek scholar Pliny the Younger witnessed the eruption from 18 miles away and provided detailed descriptions of the earthquakes, ash cloud and tsunami associated with the disaster, according to Oregon State University's (OSU) volcano experts.

Pompeii is the most prominent town associated with the Vesuvius eruption. About 10 feet of volcanic ash, dust and cinders fell on Pompeii, burying everything except the roofs of some buildings and essentially wiping the city from the face of the Earth.

But Herculaneum also fell victim to Vesuvius, buried under 75 feet of ash produced by the explosive force of the eruption. It had been a seaside resort, with a population of about 5,000 at the time of the eruption, OSU experts say.

In the 1960s, a human victim of the volcanic hot ash avalanche from Mount Vesuvius was found lying on a wooden bed in Herculaneum, buried within a small room.

Petrone and his colleagues were recently called in to examine the remains of this person, who appears to have been the "guardian" of the College of the Augustales.

The bones of the victim revealed that he was a young man, probably in his mid-20s, Petrone said.

"His bones were totally burst and charred, as well as the wood of the bed," Petrone said. "Looking carefully at the remains of this victim, I noticed that something dark was shining inside the head," he explained.

"They were small black fragments with a glassy appearance, something like obsidian but definitely more fragile," Petrone continued. "I could find this material exclusively in the victim's skull, therefore it could only be the remains of the brain tissues. But I had to demonstrate it."

Petrone theorized that the man's brain had undergone "vitrification," a process by which living tissue turns to glass or a glaze if it burns at high heat and then rapidly cools afterward.

"Vitrification rarely occurs in nature and is particularly rare to find in the archaeological record," said Petrone, noting that the most commonly detected vitrified remains are plant tissues that have been turned to charcoal.

Laboratory tests determined that the glassy material from the man's head contained proteins and fats associated with the brain and hair, Petrone said.

"All this evidence was the undisputable proof that it was the brain of the guardian, vitrified by the high temperature of the ash surge that killed him," Petrone said.

The glass brain fragments add to the evidence that the inhabitants of Herculaneum died instantly from the intense heat of the fast-moving cloud of volcanic ash and gases that erupted from Vesuvius, Petrone said. Previously, scholars had thought the victims died from suffocation, choking on the ash.

The findings were published Jan. 23 in the New England Journal of Medicine.

"Those results have proved crucial to risk evaluation, since they showed that even if people were sheltered within buildings, they did not survive due to the high temperature -- a matter with clear implications for the volcanic risk to which the 3 million inhabitants of modern Metropolitan Naples are nowadays exposed," Petrone said.