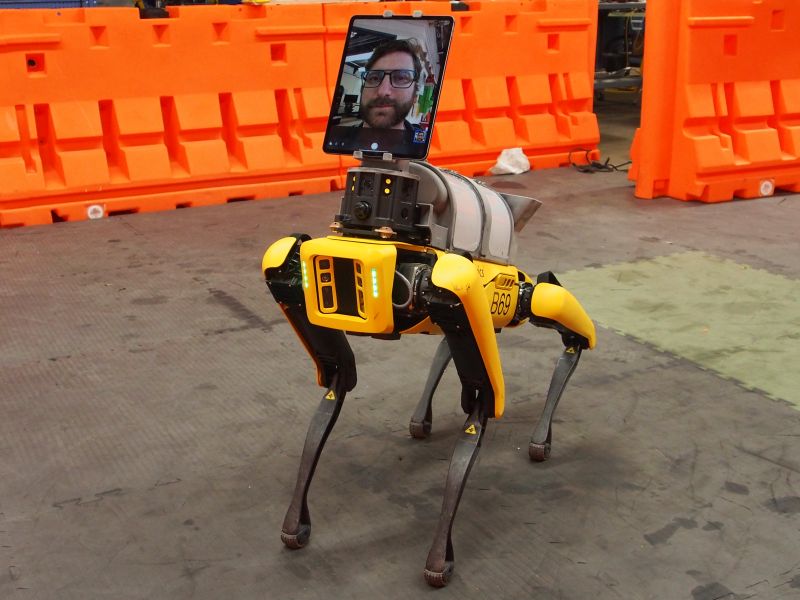 Bright yellow and looking like a headless deer, Spot can travel across ground too risky for humans. "Built for dirt and danger," in the words of its maker Boston Dynamics, this robot is now helping humans battle a different threat: the spread of coronavirus.

Equipped with an iPad and two-way radio, Spot has been making the rounds at Brigham and Women's Hospital in Boston since April. Medical technicians use the robot to interview patients with suspected COVID-19 remotely, with no need to don personal protective equipment. Think of it as mobile telemedicine.

Then there's computer programs that pore through mountains of information to pluck out and analyze the relevant bits to help find a promising drug for COVID-19 after just two days' work.

Artificial intelligence (AI) tools are tackling the pandemic on every front: Robots that blast surfaces with high-power ultraviolet light are decontaminating hospitals around the world. Robots also stepped in to help Chinese hospitals cope with coronavirus, checking visitors' temperatures, delivering food and medicine, keeping isolated wards clean and even offering a little entertainment.

Medical robots can go where human doctors can't, and process information much faster. But scientists are still only in the very early stages of using AI to treat patients.

"There's still a big gap between this kind of research and the clinical applications," said Steve Jiang, a professor at UT Southwestern Medical Center in Dallas who directs the division of medical physics and engineering.

The hospital helper robots in China, for example, are under human control via a 5G connection. As British robotics professor Chenguang Yang told the BBC, "Robots that share space with humans, also known as cobots, need to reach very high safety standards. Otherwise, it's simply too dangerous."

Taking over the tedious tasks

Jiang and his colleagues are developing an AI system to help plan radiation treatment for cancer patients, a complex process that can take up to a week. The system aims to ensure more uniform high-quality care and improve efficiency. "AI can do that, because AI can learn from the good planners how to achieve a good plan," Jiang explained.

Kristy Brock is a professor at the University of Texas MD Anderson Cancer Center in Houston. She said, "AI can help us in radiation oncology improve the efficiency and the consistency of the way that we treat patients. You have this variation between people, and you have this huge amount of time that it takes. It's what I consider low-hanging fruit."

Brock added: "Algorithms don't get tired at the end of the day, they don't not sleep the night before, they don't have a headache. They don't suffer from those sorts of things."

The U.S. Food and Drug Administration has approved several AI tools that provide a "first pass" radiation treatment plan that is subsequently refined by a dosimetrist (a medical professional who helps calibrate dosages in radiation oncology) working with a radiation oncologist and medical physicist.

Robots are poised to play a similar supporting role in surgery. The Smart Tissue Autonomous Robot (STAR), developed by a team at Children's National Medical Center in Washington, D.C., has outperformed humans at a surgical procedure called intestinal anastomosis. This operation, which involves connecting two pieces of bowel after a portion between them has been removed, bedevils even the most experienced, skilled human surgeons.

Working autonomously, STAR stitched together sections of pig intestine in the lab and in live, anesthetized animals, with sutures that were more even and less leak-prone than those placed by human surgeons.

STAR is different from the surgical robots that have been operating since the mid-1990s, which allow surgeons to remotely operate tiny instruments while viewing the surgical field through a high-definition, 3D camera, miniaturizing the surgeon's moves and eliminating tremor.

AI can harness medical data and turn it into best treatments

While the human surgeon is always in control during these procedures, scientists developing STAR and other smart surgical robots say they could be used to take over certain pieces of an operation, like "cruise control of surgery," as University of Toronto computer scientist Animesh Garg told Nature scientific journal in 2019. The surgical team would still be in charge, and ready to step in immediately if anything goes awry.

The real transformative power of AI in medicine will be realized, according to Brock, when doctors can start using it to guide decisions about patient care, which she anticipates will happen in the next five years and beyond.

For example, an AI tool could be "trained" on hundreds of millions of images from patients with a specific type of cancer, along with their medical records, and identify new markers to guide the care of future patients with the same disease.

"AI can really help us to take all of that information and harness it, to be able to identify 'oh, this patient has early indications of a toxicity, so we may need to do something different, this patient has signs that their tumor is incredibly radiation-sensitive,'" so it could be treated successfully with a lower dose of radiation, Brock said.

But investigators are still figuring out how to gather the massive quantities of data that would be needed, and ensure its quality.

"That's the biggest limitation to why AI in medicine isn't moving faster," Brock said. "Getting clinical data that is well curated and well organized is really our bottleneck moving forward."

Courtesy of The Robot Report, here's a short video of Spot in action, warning about social distancing in a Singapore park: