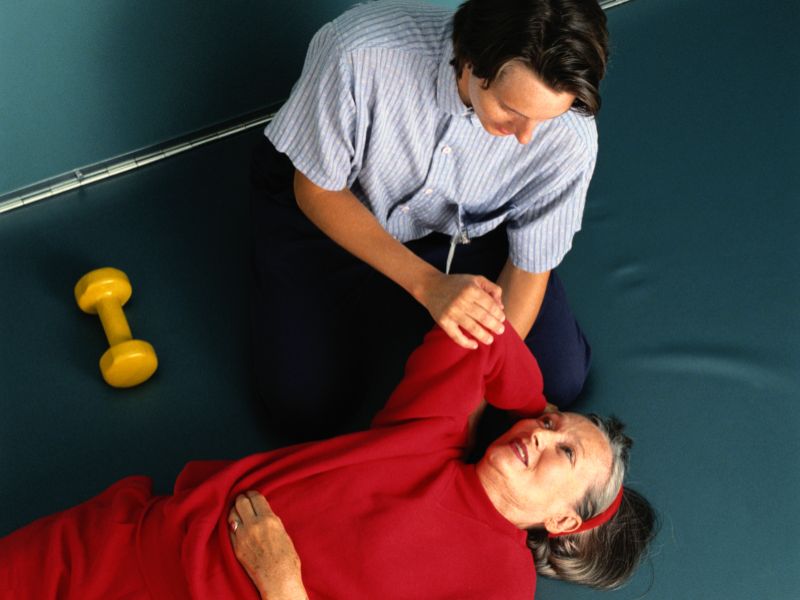 Could telehealth help paralyzed stroke victims recover their motor skills faster than they would working directly with a physical therapist?

Yes, claims a new study that found patients who had participated in at least 12 weeks of at-home rehabilitation with live video consultations ("telerehabilitation") scored higher in testing of the recovery of their motor skills than those who had 12 weeks of in-person rehabilitation.

Study authors, including Chuancheng Ren from Fudan University in Shanghai, China, reported that the convenience of rehabilitating at home may have helped study participants stick to their programs. That may have helped them recover their motor skills better than those who had conventional rehab.

"I'm not surprised that they could see similar effects of therapy with patients using telemedicine as they would via in person," said Dr. Andrew Southerland, an associate professor of neurology and public health sciences at University of Virginia Health, in Charlottesville, Va. "Extrapolating that same technology and line of thinking to rehabilitation makes sense."

Telemedicine for a lot of patients is a way to receive care in the home in situations where they otherwise would need to get in their car, travel, and possibly walk up and down stairs. That can be very strenuous for patients, said Southerland, who was not involved with the new study. It's possible they would be more receptive and able to perform the rehabilitation in a home environment.

"I think that's one possible reason why something like this could potentially work better or help patients more," he added. "I still think that's perhaps an open question about whether telerehabilitation is truly better versus just simply being equivalent to what they could receive by in-person rehabilitation."

In the study, the researchers analyzed the cases of 52 patients in China, half of whom completed home-based telerehabilitation while the other half were in a conventional outpatient group. For both groups, each session included 60 minutes of occupational and physical therapy, plus 20 minutes of a therapy called electromyography-triggered neuromuscular stimulation. The patients had each been admitted to Shanghai Fifth People's Hospital, affiliated with Fudan University, between July 2017 and January 2019.

The patients participated in motor function and brain assessments before the start of the study, once they completed rehab, and again three months later. The investigators found that participants who did in-home rehabilitation received higher scores in motor skills than those who did their therapy in a more conventional setting.

One limitation of the study was that there was not a "control group" receiving no rehabilitation, the authors noted. If there had been, the researchers would have been able to estimate the amount of recovery that occurs naturally.

The findings were published online recently in the journal Neurology.

A challenge of telemedicine for rehab is ensuring that the patient is physically able to do the rehab techniques. Having a caregiver or family member in the home to help is critical to their success, Southerland said.

And doctors still need a nurse or a technician at the bedside to help walk the patient through the neurological exam with telerehabilitation, Southerland noted.

Dr. Sheital Bavishi is an assistant professor in the department of physical medicine and rehabilitation at Ohio State University's Wexner Medical Center, in Columbus. She said that studies show that early rehabilitation after a stroke brings greater improvement for the patient.

"Quality of life is enhanced if post-stroke patients have more functional abilities to manage their [activities of daily living] and have a greater independence," Bavishi said.

It's possible that home-based rehab may work better for some patients because they are being taught exercises in their home environment, which can make compliance better, she said. In a clinic, they're using equipment available in the clinic, while at home they're adapting the exercises to what they have.

"Rehabilitation is most effective when it is patient-centered," Bavishi said. "Therefore, some patients may have greater benefit in conventional rehab than home-based rehab."

Bavishi thinks that studies that show success in telerehabilitation or experiences with telemedicine during the pandemic may lead to more telemedicine in the future.

"This is very exciting for us as physiatrists because our patients with disabilities will get greater access to care," Bavishi said. "The health care disparities and access to care will decrease with more telehealth options." (A physiatrist is a physical medicine and rehabilitation physician.)

The pandemic has accelerated the understanding and acceptance of telemedicine as a platform to care for patients, Southerland said.

"Probably more important to the expansion and sustainability of telemedicine is really to emphasize with our lawmakers and our policy makers the importance of reimbursement pathways and regulatory environments that incentivize folks to perform telemedicine services, and that's also true for telerehabilitation," Southerland said.