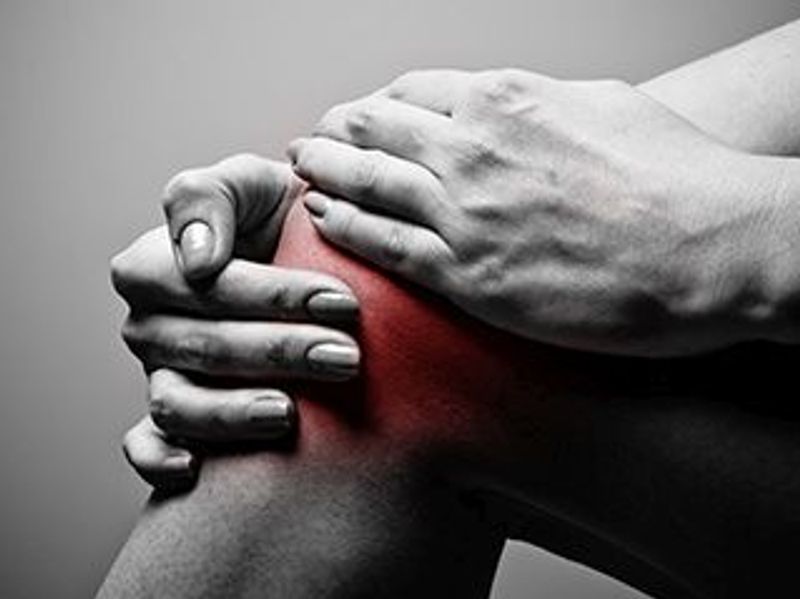 For those who suffer painful arthritis in their aging knees, new research suggests a noninvasive treatment might deliver lasting relief.

Called genicular artery embolization, the roughly two-hour catheter treatment involves a once-and-done injection of tiny hydrogel particles into arterial pathways in the knee joint. The goal: To decrease overall blood flow in the joint, and thereby markedly decrease painful inflammation in the knee.

Working with 40 patients who were tracked for a year, the investigators found the procedure led to benefits within days, with pain reduction improving over time.

Specifically, nearly 70% of patients ultimately achieved a 50% drop in pain by one year out. About 43% achieved a 75% reduction, a result that study author Dr. Siddharth Padia characterized as "essentially pain-free."

"We have the potential to completely disrupt and change the way patients are treated for knee osteoarthritis," said Padia, a professor of radiology at the University of California, Los Angeles.

Presenting the findings last week at a virtual meeting of the Society of Interventional Radiology, Padia noted that "having arthritis is a very common problem resulting in pain and physical dysfunction."

How common? According to Padia, roughly 650,000 Americans develop some form of osteoarthritis every year, with the knee being a particularly common trouble spot.

The American Academy of Orthopaedic Surgeons explains that osteoarthritis involves the gradual degradation of knee cartilage, and it is the most common type of arthritis among knee arthritis patients, particularly among those 50 and up.

The pain, swelling and stiffness that ensues can make routine activities -- such as walking and going up and down stairs -- difficult or even impossible to perform.

In fact, Padia stressed that osteoarthritis is a major cause of disability, affecting as much as 40% of all American adults.

Standard treatment options include nonsteroidal anti-inflammatory drugs (NSAIDs, such as ibuprofen [Motrin] or naproxen [Aleve]), steroid shots directly into the knee, physical therapy and, in severe cases, total knee replacement surgery. All are designed to approach knee osteoarthritis as an essentially "wear-and-tear" problem triggered by the breakdown of cartilage.

But all of these options have drawbacks, Padia said. NSAIDs are only temporarily effective, while steroid-based relief only lasts about two to three months. And knee surgery, he cautioned, is invasive and entails a very long recovery period.

To get around these concerns, the new treatment approaches knee osteoarthritis differently, Padia explained, taking aim at the pain-causing inflammatory enzymes that get released as cartilage deteriorates.

To test the treatment, Padia and his team focused on moderate-to-severe knee osteoarthritis patients who were either deemed ineligible for knee surgery or refused the option, but had seen no success with other interventions. Patients were between the ages of 49 and 80.

With only localized sedation, all had hydrogel particles delivered to their knee arterial pathways by means of a catheter inserted through a tiny incision in the hip. The particles are like fine grains of sand, "except much smaller and finer," Padia said.

Patients were evaluated one week, one month, three months, six months and one year later.

Significant pain relief occurred as soon as three days following the treatment, with pain scale scores plummeting (on average) from 8 out of 10 to just 3 out of 10 within the first week. Side effects included skin ulcerations and blood supply blockage to some of the small bones in the knee, but both were deemed minor and short-lived.

However, research presented at medical meetings should be considered preliminary until published in a peer-reviewed journal.

Padia said his team plans to conduct a larger trial. And while this study focused on the knees, "there is promise [for the treatment] in other joints," including the shoulders and elbows, he added.

"They've had some success here," he acknowledged.

"It's actually quite similar to 'radio frequency ablation,' in which a probe is inserted into the nerves around the knee to raise the temperature," Schildhorn noted. That procedure can provide about 60% pain relief.

"So for someone who has moderate disease that's not getting better and who is of the appropriate age and approaching end-stage arthritis, I don't see a lot of problem with this treatment," he said.

Still, Schildhorn cautioned that more study is needed, noting that blocking blood supply to the knee bone might have unintended consequences.

"It makes me very nervous, because I don't know how they can control for this. And if you completely knock out blood supply it can actually cause those parts of the bone to collapse, which can actually hasten arthritis," he added.

"For now, I would err away from this," Schildhorn said. "I feel it does carry a little more risk, compared with any other intervention that doesn't compromise blood supply."

There's more on arthritic knee pain at the American Academy of Orthopaedic Surgeons.