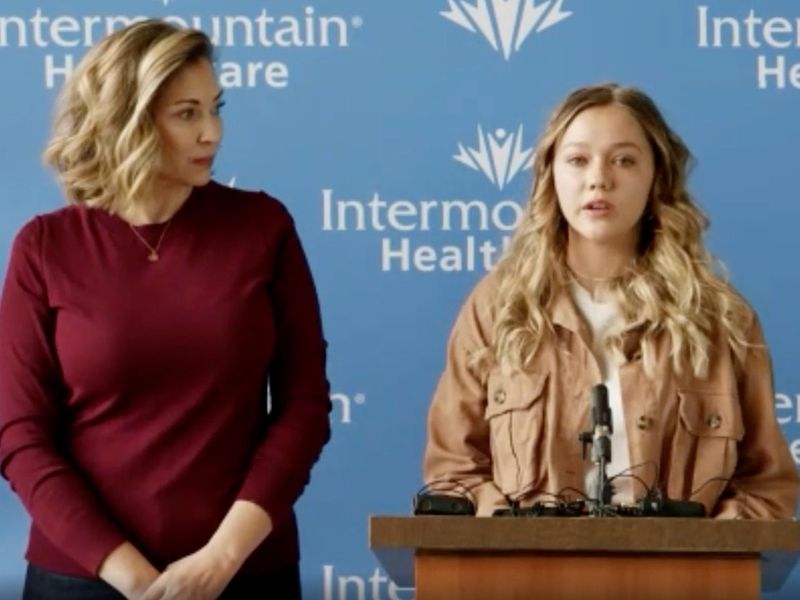 When Will Americans With Diabetes Get Relief From High Insulin Prices?

Katherine Stewart, 16, must take six to 10 insulin shots a day to properly manage her type 1 diabetes.

Her Highland, Utah, family pays $500 a month out of pocket for her insulin. Before they meet their insurance's deductible, they shell out the cash price of nearly $2,000 a month.

Now Stewart is preparing to leave the nest, and she doesn't know how she'll be able to afford it.

"Insulin is so expensive, it's already something I've started to worry about," she said at a news conference Tuesday. "If I'm already trying to pay for college and get a job, how am I supposed to get the money to also buy insulin?"

U.S. legislators, policymakers and health care experts agree. Several strategies to rein in the runaway cost of insulin have been proposed in recent months, though none has yet borne fruit.

The highest-profile tack is President Joe Biden's promise in his State of the Union address to champion legislation that would cap insulin copays at $35 a month.

But other means of lowering insulin prices also are being pursued, including a plan by maverick nonprofit Civica Rx to start manufacturing its own insulin and selling it at $30 a vial or $55 for five insulin pens.

"The price of manufacturing insulin has not gone up -- it definitely hasn't gone up 11% a year for 20 years," Civica's board chair Dan Liljenquist said at the same media briefing where Stewart spoke. He is also chief strategy officer for Salt Lake City-based Intermountain Healthcare.

"When we manufacture insulin, we're going to put it on the market at a wholesale price that only reflects how much we need to continue to manufacture. That's it," Liljenquist added.

Insulin went on the market a century ago this year, after its discovery by Canadian surgeon Frederick Banting and his medical student assistant Charles Best, Liljenquist noted.

"Banting and Best donated their discovery for $1 to the University of Toronto, with the expectation that insulin would be widely affordable to anybody who suffered with diabetes," Liljenquist said. "It literally was a miracle drug, and 100 years later, given the exorbitant pricing of insulin, I think both Banting and Best would be disappointed with the current market today."

Insulin prices have climbed to current levels through a combination of a captive market of diabetes patients, a small number of competing manufacturers, and a U.S. insurance structure in which pharmaceutical companies cut deals with insurers to have their products covered, experts said.

People with type 1 diabetes need insulin to survive, and news reports are rife with stories of patients whose health has suffered because they've skipped injections to make their supply last longer.

"One in every three dollars spent on prescription drugs in this country is spent on a person with diabetes, so this community experiences an outsized impact of increasing drug costs," said Lisa Murdock, chief advocacy officer for the American Diabetes Association.

"People with diabetes who must take insulin are especially captive, and skipping or rationing doses becomes a dangerous reality for 1 in 4 insulin-dependent Americans," Murdock said. "Sadly, that number will continue to climb if patient costs keep rising."

Because insulin is a biologic drug, it's much more complicated to manufacture than other pharmaceuticals, making it difficult for generics to enter the marketplace, said Juliette Cubanski, deputy director of the Kaiser Family Foundation's Program on Medicare Policies.

"There are basically three major manufacturers of insulin products today, and they sort of compete with each other to get placed on formularies -- the list of drugs that that insurers cover," she said. "And the way that they compete for placement on these formularies is by offering very big discounts on the price of the drugs."

Rebates and discounts negotiated with insurers can lower the high list price of insulin by as much as 60%, Cubanski said.

"Those discounts are so large because the manufacturers want to kind of sweeten the pot for insurers when they're making decisions about which insulin products to cover and which to leave off their formularies," Cubanski explained. "So in the process of this negotiation, the list prices have been creeping up and up and up, and the discounts or rebates have been growing larger and larger."

"There are 10 drugs that drive the almost $100 billion rebate game in pharmaceuticals. No. 1 is Humira, but No. 2 and No. 3 are fast-acting and long-acting insulin," Liljenquist said. "Diabetics are paying way more than they should at the pharmacy counter. That money is then spread around to a whole bunch of people on the back end."

Biden is pushing for legislation to cap insulin copays at $35 as part of an overall plan to lower prescription drug costs.

"It's safe to say that all of us can agree that prescription drugs are outrageously expensive in this country," Biden said last week. "I'm committed to using every tool I have to lower prescription drug costs for Americans consistent with the drug companies getting a fair return on their investment."

This legislation hasn't been a hit with the pharmaceutical industry.

In a March 7 statement, Stephen Ubl, head of the industry lobby Pharmaceutical Research and Manufacturers of America, said: "A damaging bill jammed through a partisan process will not provide patients struggling to afford their medicines meaningful relief."

But a Kaiser Family Foundation poll from October found that more than 8 in 10 Americans favor allowing Medicare to negotiate prices, including 95% of Democrats, 82% of independents and 71% of Republicans, the Associated Press reported.

Senate Democrats are trying to rally support for the measure, and experts are optimistic that insulin prices are an issue that could draw Republican support as well.

"We are hopeful the Senate will act as early as this month, and even more so that members of Congress can move beyond moments of unfortunate partisanship and recognize this issue, and the urgency of passing a national copay cap transcends the tensions of Washington politics," Murdock said.

She noted that Republicans have supported caps on insulin copays in the past, including proposals to make permanent a demonstration project that limits cost-sharing for insulin to $35 for participating seniors.

"There should be a bipartisan way forward to limit out-of-pocket costs for Americans with diabetes regardless of what kind of insurance they have," Murdock said.

But the legislation would only help people who have insurance, leaving many diabetics who are uninsured out in the cold, Cubanski said.

"So the big question now is: What can policymakers do to address affordability concerns for people who don't have health insurance?" she said.

Facing pressure from policymakers and the public, pharmaceutical companies have tried to lower costs for some by making their own generic brands of insulin and by offering direct discounts to consumers.

"They have started manufacturing these so-called 'authorized' generics that are basically exact replicas of the branded insulin products, that may be sold under a different name and a lower price," Cubanski said. "They started to send somewhat less expensive products into the market. They've tried establishing programs that people can apply to where they cap their monthly costs at a certain amount."

But Cubanski isn't sure how popular these alternatives are among people with diabetes.

"For people who use insulin who are on a well-established regimen, they may be reluctant to switch from one product to another," she explained.

The real game-changer might be Civica Rx, which recently announced its plans to manufacture generic versions of all three major insulin products and sell them at wholesale prices.

The nonprofit is building a 140,000 square-foot manufacturing facility in Virginia, and by year's end plans to begin clinical trials of its products as part of the U.S. Food and Drug Administration licensing process, Liljenquist said.

Civica plans to be fully transparent in its insulin pricing, even printing its recommended price on product packaging, Liljenquist said.

"When we go to the retail market, we're doing something no other drug company has ever done before -- publish on our packaging what a fair price should be," he said. "Just like you have a manufacturer suggested retail price on a book, we're going to do that with insulin."

The company hopes that transparency will reset the market price, Liljenquist said.

That would be a tremendous help to families who are now paying more for insulin than they are for their mortgage, said Brandi Stewart, Katherine's mom and a diabetes advocate.

"We literally have people dying in our country because they can't afford the medicine they need to stay alive," Brandi Stewart said in the Tuesday news conference. "People can't afford a life-giving, life-sustaining drug."