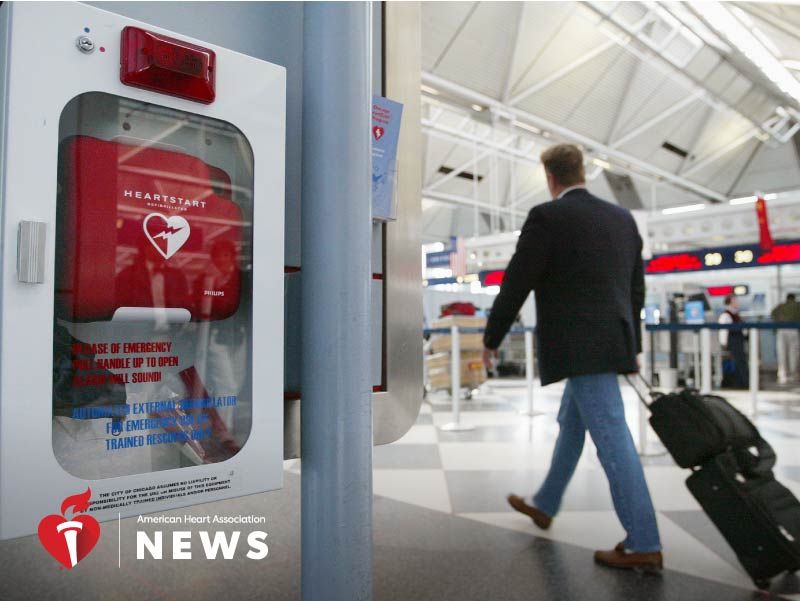 Sudden cardiac arrest -- when the heart stops beating -- is one of the leading causes of death in the U.S. To help save lives, automated external defibrillators, which shock the heart back into a regular beat, have been placed in many public places.

Now, these portable AED devices may improve the chance of survival among children and teens, according to a new study presented Sunday at the American Heart Association's Scientific Sessions meeting in Chicago.

The researchers analyzed statistics in a national database on 971 cardiac arrests in children ages 18 and under that occurred outside a hospital between January 2013 and December 2017. An AED was used 10.3 percent of the time, but rates varied across age groups. For infants, defibrillators were used to help 2.3 percent. But AED use became more common as children got older: 8.3 percent among kids ages 2 to 5; 12.4 percent among those 6 to 11; and 18.2 percent among 12- to 18-year-olds.

Older kids may be more likely to have a bystander use a defibrillator because they may be more likely to go into cardiac arrest in a place, such as a school, that has an AED, said the study's lead researcher Dr. Heather Griffis, director of the Healthcare Analytics Unit at Children's Hospital of Philadelphia.

Bystanders might also be afraid to use a defibrillator on infants and preschool-age children out of fear of injuring them, said the study's senior researcher Dr. Joe Rossano, a pediatric cardiologist at Children's Hospital of Philadelphia.

"If a child has an arrest, it's a scary thing," Rossano said. "People don't want to do something wrong. But anything you do is going to be helpful."

Children treated with an AED by a bystander had a survival rate of 29.1 percent, compared to 23.7 percent for children who were not. The rates varied by age and race, with children who were 12 to 18 years old or white having better outcomes than younger children or those who were black or Hispanic. Griffis said similar racial differences also are seen in adults.

"It's unfortunate that we're still seeing these disparities across race, ethnicity and neighborhoods," Griffis said. "But this is a great opportunity for education and to increase availability" of AEDs in neighborhoods that don't yet have them.

More than 350,000 Americans -- including about 7,000 children -- experience cardiac arrests outside of the hospital each year. AEDs come with step-by-step instructions that make it possible for people without specialized training to use them.

Dr. Alson Inaba directs pediatric advanced life support classes at Queen's Medical Center in Honolulu and said the study added important new information on the use of AEDs in children.

Inaba, who was not involved in the research, said that bystanders should start CPR on a cardiac arrest victim of any age after calling 911.

"The bottom line is that starting CPR immediately is your first priority," Inaba said. "Don't be afraid."

Then, send someone to get a defibrillator. "When you combine CPR with an AED, the survival rates increase," he said.

Indeed, a separate study published earlier this year in the AHA journal Circulation found that survival rates doubled when bystanders used a defibrillator to help an adult who had experienced cardiac arrest before emergency responders arrived.

"Defibrillators work," Rossano said. "It's something anybody can do, and the more that are available, the more opportunities there are to save lives."