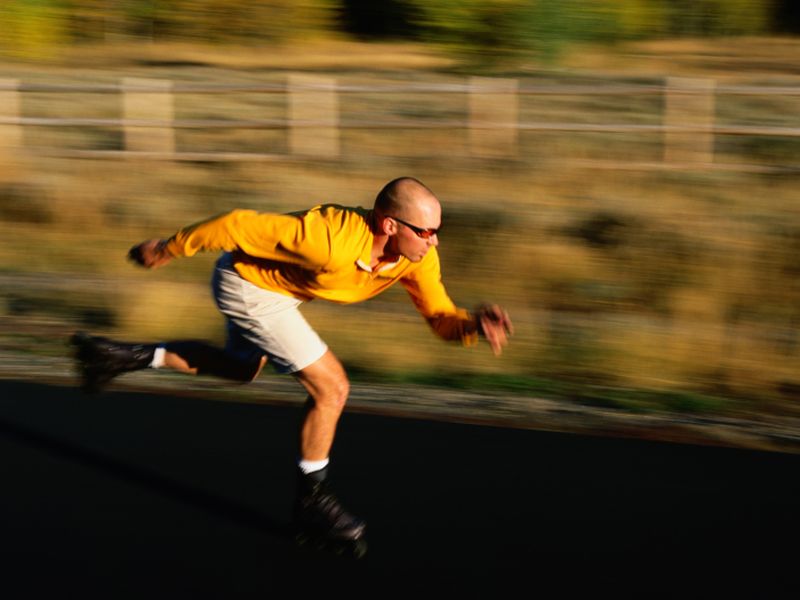 Middle-aged men who partake in extreme exercise are not putting their heart health at risk, a new study contends.

Aging athletes who do eight or more hours a week of vigorous exercise have no greater risk of early death than people who work out less often, researchers found.

Extreme exercise included activities such as fast running or biking, as well as competitive sports such as basketball or tennis.

In fact, middle-aged men who didn't already have hardening of the arteries saw their odds for early death fall by half if they regularly engaged in vigorous activity, noted senior researcher Dr. Benjamin Levine. He's director of the Institute for Exercise and Environmental Medicine, a collaboration of University of Texas Southwestern Medical Center and Texas Health Presbyterian Hospital Dallas.

"Being a high-level athlete was clearly protective and not injurious" for those with lower levels of arterial plaques, Levine said.

Previous studies had questioned whether extreme exercise could be harmful, because some very active athletes tended to have higher levels of coronary artery calcification (CAC), researchers said in background notes.

Heart doctors use imaging tests to check for CAC as a means of assessing risk for heart attack, stroke or heart disease. Coronary calcium is a footprint of atherosclerosis, in which plaques accumulate in the blood vessels that supply the heart.

"Particularly the male athletes tended to have more coronary plaques, and the plaques they did have were virtually all calcified," Levine said.

But no study had ever taken the next logical step, he added.

"No one actually ever determined whether that made them at higher risk of death or not, and that's really the whole question," Levine said. "Who cares if they have more calcium if they don't die [prematurely]?"

To examine this more closely, Levine and his colleagues studied data gathered on nearly 22,000 generally healthy men, aged 40 to 80, during the years from 1998 through 2013.

The men reported their activity levels and underwent coronary calcium scanning. Most were runners, but some were cyclists, swimmers, rowers or triathletes.

Extreme exercise was defined as eight or more hours a week of activity at an average of 10 metabolic equivalents, or METS, Levine said. METS are a measure of the energy spent in activity.

Vigorous exercise at 6 METS or higher can include jogging at 6 mph or faster, bicycling at 14 mph or faster, carrying heavy loads, or playing competitive basketball, soccer or tennis, according to the Harvard T.H. Chan School of Public Health.

"People don't typically do that for recreational fitness," Levine said of these exercise levels. "They're more likely to do that for competitive fitness."

The athletes were split into two groups based on their CAC scores, and researchers compared them based on their levels of physical activity. The investigators tracked participants' rate of death for any cause and specifically for heart disease.

During the study period, extremely active athletes with low CAC scores died half as often as the least-active men with similar CAC scores, the findings showed. They also were 61 percent less likely to die of heart disease.

Those with high CAC scores also appeared to do well. Extreme athletes with high arterial calcium were about 23 percent less likely to die compared with less active men, but there were so few deaths that the result was not statistically significant, Levine said.

The study did not include women because their lower rates of death in middle age made a valid statistical comparison impossible. "The trend seems to be similar in men and women, but we can't say anything convincingly because the death rates were so low" in women, Levine said.

"A really important message that I try to get across to my patients is you can have plaque present but if you lead a healthy lifestyle, it helps prevent dying of a heart attack," said Goldberg. She is medical director of the Center for Women's Health and Women's Heart Program at NYU Langone Health in New York City.

However, Goldberg hesitated to say these results would apply to women the same as men.

"I would have to see a study done to see what the results are," Goldberg said.

Levine pointed out that there are several potential reasons why extreme exercise might aid heart health rather than harm it.

"Exercise, particularly over a long time, causes increased flexibility and youthfulness of the heart and blood vessels," he said. "Blood vessels are better able to flex and send blood where it needs to go."

It also appears that plaques in arteries of extreme athletes tend to be more calcified and harder, making them less prone to rupture and cause a blood vessel blockage, Levine said.

So how old might be too old to engage in extreme exercise?

"I don't think there's an upper age limit beyond which the benefit diminishes," Levine said. "The trick is to sustain a meaningful amount of exercise across your lifespan."

While extreme amounts of exercise don't appear to harm your heart, you don't need to do that much working out to keep yourself healthy, he noted.

"The biggest bang for your buck comes with the conversion from a sedentary to an active lifestyle," Levine said. "Most of the benefit for cardiovascular mortality tends to plateau at about the three- to five-hour-a-week mark."

The study was published online Jan. 30 in JAMA Cardiology.