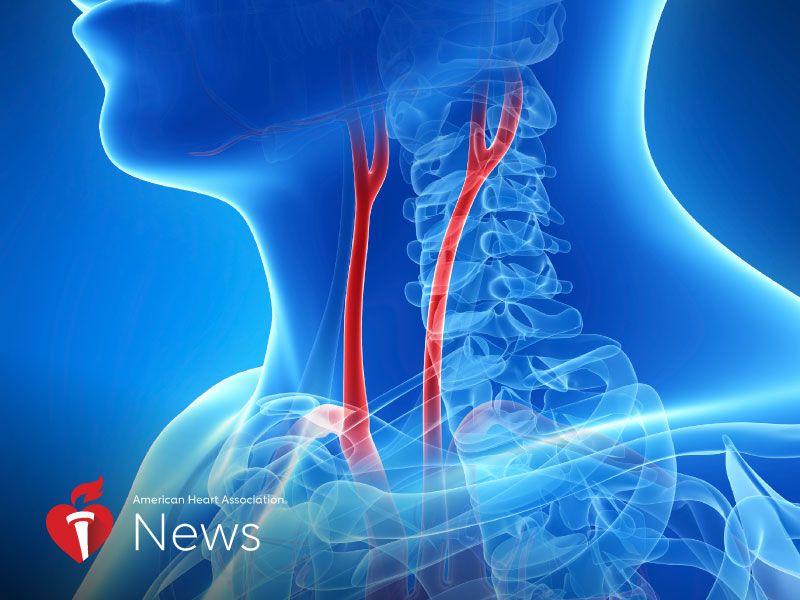 Men are more likely than women to develop unstable plaques in their neck arteries, a dangerous condition that can lead to strokes, according to new research that also identified a helpful warning sign for rupture-prone plaques in women.

The preliminary study, presented Thursday at the American Heart Association's Vascular Discovery Scientific Sessions, sought to identify sex-specific markers of plaque instability in patients with severe carotid atherosclerosis, or fatty deposits in the neck arteries that supply blood to the brain.

Carotid atherosclerosis causes at least 15% to 20% of ischemic strokes, the most common type of stroke in which blood flow to the brain has been blocked. Unstable plaques in the neck arteries are more likely than stable plaques to break free, impede blood flow and cause a stroke.

While more men have strokes than women, women have a greater chance of dying after a stroke, although it's not entirely clear why.

"There's been a lack of representation of women in studying cardiovascular risk, which has led women to be underdiagnosed and undertreated," said the study's lead author, Karina Gasbarrino, a researcher who recently completed her Ph.D. at McGill University in Montreal. "Therefore, we wanted to understand the biological differences between men and women in developing atherosclerosis so that we can then implement better clinical guidelines."

The researchers examined both plaques and blood samples from people who underwent surgical procedures that remove plaques from the carotid arteries.

The study found the odds of men having unstable plaques was 2.67 times that of women. Yet among those women, researchers found a relatively easy way to find out which women had potentially dangerous unstable plaque: They tended to have a lower ratio of adiponectin, a protein hormone secreted by fat tissue that may have beneficial effects on vascular health.

"This marker may be useful clinically to identify women with these unstable plaque features so we can give them the proper treatment that they need," said the study's senior investigator, Dr. Stella Daskalopoulou, an associate professor of medicine at McGill University.

Dr. Dorothea Altschul, a vascular neurology specialist who performs carotid procedures, said a single blood test may not necessarily provide a complete picture and having confirmatory blood samples at multiple other time points would strengthen the findings.

"As a clinician who has to make decisions on who gets these carotid endarterectomies, I would very much welcome a test that tells me there's something unstable, and you should definitely have surgery right away," said Altschul, who was not involved in the study.

However, she said the study was limited by not looking at when the specimens were collected.

"Hormone levels are very volatile and can change throughout the day, so I think you should test on multiple timelines so you don't come to the wrong conclusion," said Altschul, a neurosurgeon and researcher in Ridgewood, New Jersey.

Still, she applauded the study for delving into the differences between men and women when it comes to vascular health.

"We're always lumping men and women together, so this study was a nice attempt to find out whether there are inherent differences in the expression of atherosclerotic disease," Altschul said. "I'd like to see more gender-separated research like this in the future."

The study's results underscore the need for doctors to stop taking a "one size fits all" approach to treating unstable plaque, Daskalopoulou said.

"It shows that we have to sensitize doctors and make them more aware that the physiology of men and women are not the same," she said.

"We still need a panel of markers to identify dangerous plaques before they rupture and give you a stroke," she said. "If we do this, we can save many lives."