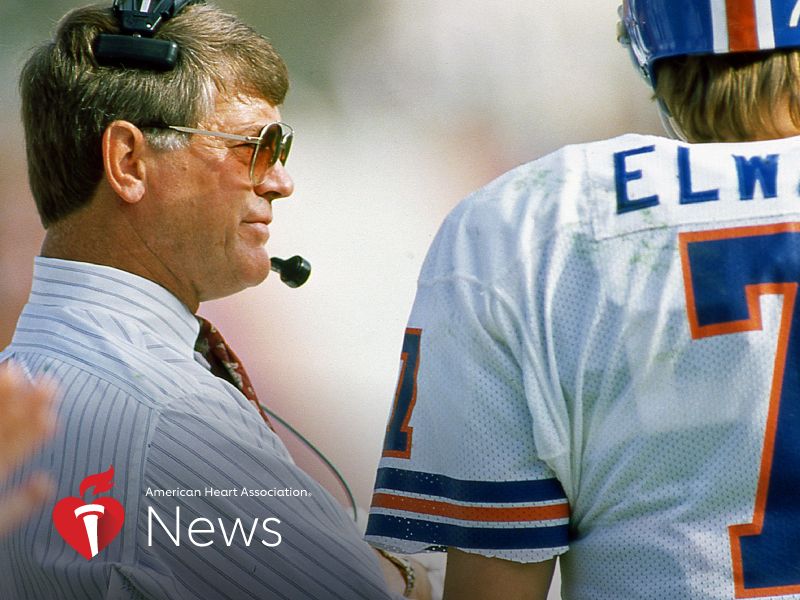 AHA News: NFL Coaches' Drive for Success Can Be Hard on Their Hearts

You're not likely to find any studies linking heart disease and NFL coaches - just a long list of familiar names.

Among them: Mike Ditka of the Chicago Bears, who had heart attacks in 1988 and 2018. Bill Parcells of the New York Giants and other teams, who needed bypass surgery in 1992. Dennis Green of the Minnesota Vikings and Arizona Cardinals, who died of complications of cardiac arrest in 2016. Tony Sparano of the Miami Dolphins and Oakland Raiders, who died of heart disease in 2018.

Then, there's Dan Reeves, former player and assistant with the Dallas Cowboys and coach of the Denver Broncos, Giants and Atlanta Falcons. He'd needed angioplasty in 1990 and again in 1991. Then, after a game in December 1998, he felt an intense burning in his throat and reported for an exam early the next morning.

Reeves, 54 at the time, was focused on the playoffs and wanted to put off treatment. His cardiologist declared that "the dumbest thing I've ever heard in my life. You could have a heart attack tonight," Reeves recalled.

He had quadruple bypass surgery that day, then returned to the sidelines less than a month later to guide the Falcons to Super Bowl XXXIII.

As one of the most successful coaches in NFL history, Reeves describes a life full of excitement, at the cost of a grueling pace.

That's typical, said Dr. Gregory Stewart, director of the sports medicine program at Tulane University in New Orleans. And for the coaches, it's full of risks.

"They're stressed," Stewart said. They eat poorly. "They don't sleep. And they never see the doctor."

Stewart, who has worked with hundreds of NFL veterans as medical director of the NFL Player Care Foundation's Healthy Body and Mind Screening Program, said stress can be a factor in heart problems. Coaches may thrive from it, but that doesn't make them immune to the harm it causes.

That stress isn't just about having to decide about whether to punt on fourth-and-1.

"When you're coaching at the highest level, it's all about performance," said Dr. Jonathan Kim, assistant professor of medicine and chief of sports cardiology at Emory University School of Medicine in Atlanta. A coach's job security depends on winning, he said. Coaches and assistants are constantly moving to chase opportunity. "It's very rare to find a coach that has the longevity to put down roots."

Neither Kim, who co-wrote a 2018 review of the latest findings on football and heart health, nor Stewart knew of any research focused on coaches. But both said coaches rarely make their health a priority.

Scheduling a checkup can be a challenge when a patient's life is consumed by the game half of the year, said Kim, who is head team cardiologist for several Atlanta-area college and pro teams, including the Falcons.

Coaches, some of whom are former professional athletes themselves, get used to health care coming to them instead of taking responsibility for themselves, both doctors said. Generally, the challenges a coach faces can be similar to what any busy person might face - but amplified to the extreme levels of the most popular pro sport in the United States.

Reeves' description of his life makes that clear.

Now living in Atlanta, he spent 39 years in the NFL, first as a player, then as a coach. He's participated in nine Super Bowls, more than almost anybody.

To succeed at that level meant being up regularly at 4:30 or 5 each morning. During the season, he'd get home at 11 or 12 at night.

"When you're winning, you spend less time," he said. But when he was losing, his response was, "You know what? I need to work harder."

Eating right was a particular challenge. "You don't eat regularly. You're always looking at more film, you know, not getting a good meal, sending somebody out to get you a snack." He thinks teams take nutrition more seriously these days.

Reeves changed his own eating habits after his surgery. He's 75 now and his heart, which is aided by a pacemaker, seems to be in good shape. He thinks he should probably exercise more, although he has artificial hips and knees: "That happens when you're a slow running back like I was - you get tattooed," he said, laughing.

What hasn't changed is his drive.

"I miss it now. I miss the competition," he said. "I can play golf all the time, but there's nothing like getting the team ready." He loved being tested every Sunday, of feeling responsible for an entire city's hopes.

He recalled that when he was having problems, a doctor suggested he step away from the game. "And I said, 'Heck, that would be worse on my heart. My heart couldn't stand it.'"