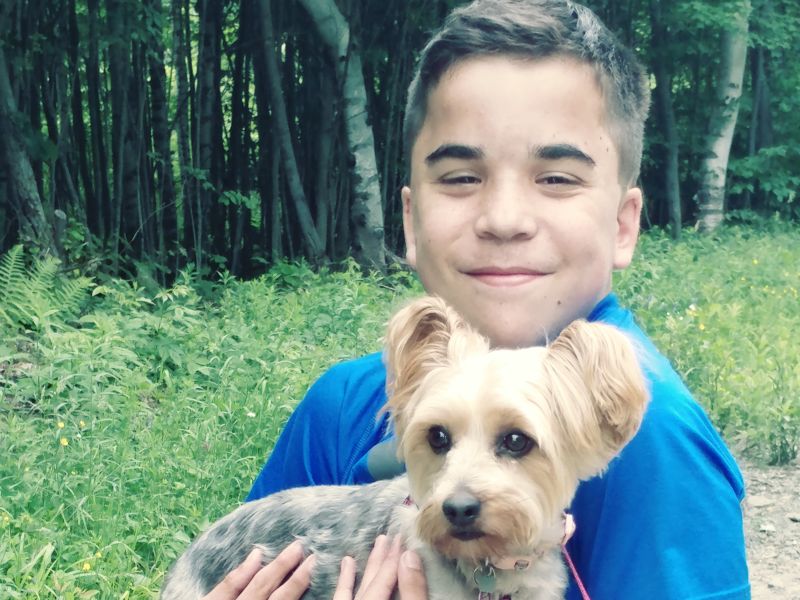 One Boy's Battle Back From Mysterious Polio-Like Illness

Last October, 15-year-old Alec Woodruff developed a strange-sounding cough. Less than a week later, he was fighting for his life in the hospital, partially paralyzed and with a tube in his throat attached to a ventilator because just breathing was a task he could no longer do on his own.

Alec's mom, Terri Woodruff, described the first signs of trouble: "I knew something was wrong. Alec was a preemie, and he has asthma, but the cough sounded so off that I called his pediatrician, and we went in, just for a listen. He also had a low fever and it wasn't subsiding." But the doctor didn't think it was anything concerning.

Before Terri went to bed that night, Alec mentioned that his neck hurt a little. He'd been lying on the couch playing video games all day, so she just assumed that was what was bothering his neck.

Something woke her at 4:30 a.m. the next morning, and when she saw Alec, he was sitting with his hands wrapped around his neck. He told his mother that he felt that if he moved his hand, his head might fall off.

At the local hospital on Long Island, doctors couldn't figure out what was wrong with Alec, his mom said. Fortunately, one doctor -- "a brilliant doctor," Terri said -- thought she knew what it was and ordered an MRI of the brain and spinal cord, and he was started on a high-dose infusion of steroids.

Doctors soon learned the identity of his mysterious illness.

It was acute flaccid myelitis (AFM) -- a polio-like illness affecting children in the United States. Three national outbreaks have occurred since 2014, according to the U.S. Centers for Disease Control and Prevention. In 2018, more than 230 children were diagnosed with the disease, the majority of them far younger than Alec. The CDC says the average age was 5 years old.

Dr. Scott Klein, chief medical officer at Blythedale Children's Hospital in Valhalla, N.Y., where Alec did the bulk of his recovery from AFM, said, "People call AFM polio-like, but it's not polio. It's basically an illness that leads to sudden arm or leg weakness, and it can affect reflexes, cause difficulty swallowing and breathing. It's similar to an injury with spinal cord involvement. People can still be completely mentally intact."

Klein said the exact cause of the disease isn't yet clear. He said it seems to be either caused or triggered by a certain strain in a family of viruses called enteroviruses. These viruses normally just cause mild illness, like a cold, according to the CDC.

Klein said after lifesaving treatment in the hospital, the focus becomes trying to maximize recovery function. "We can't cure the disease itself yet, but some kids can recover function and get close to where they were when they started. But success has been variable. Some kids have really great recovery. Some have had less," he explained.

But recovery is no simple feat. "When in a rehab hospital like Blythedale, they may need five days a week with several hours of physical and occupational therapy a day. Children also need time to still participate in school. We try to give them balance," Klein said.

Terri attributes Alec's recovery to early treatment, dedicated doctors and rehabilitation therapists, and most of all, Alec's amazing attitude.

"He's very positive. He always says, 'At least I have my brain.' He's a long way from where he was, but he's amazing," she added. "His spinal cord has been affected, but he's breathing on his own now and walking on his own. But he still has some upper left side paralysis."

Alec said, "Therapy was exhausting, but the reward was worth it. Out of 152 days, I only had one bad day where I didn't want to get out of bed. My mom said, 'If you're satisfied where you are, then I'm fine with it.'"

He said that after thinking for a minute, he decided he wasn't fine with it and got out of bed.

It has been one year since Alec took his first steps again. He's still recovering. The only thing he really misses is karate. He said it was his passion. He's a 1st-degree black belt. He said he got so much support and love from his family and from everyone at school.

"With this, or any other disease, try to focus on the positive and look for the silver lining. It's important to take today for what it is," Alec said.

Terri added, "Throughout this journey, I don't know if there were days that I was his light, or if I was just a mirror reflecting his light back to him."

Learn more about acute flaccid myelitis from the U.S. Centers for Disease Control and Prevention.