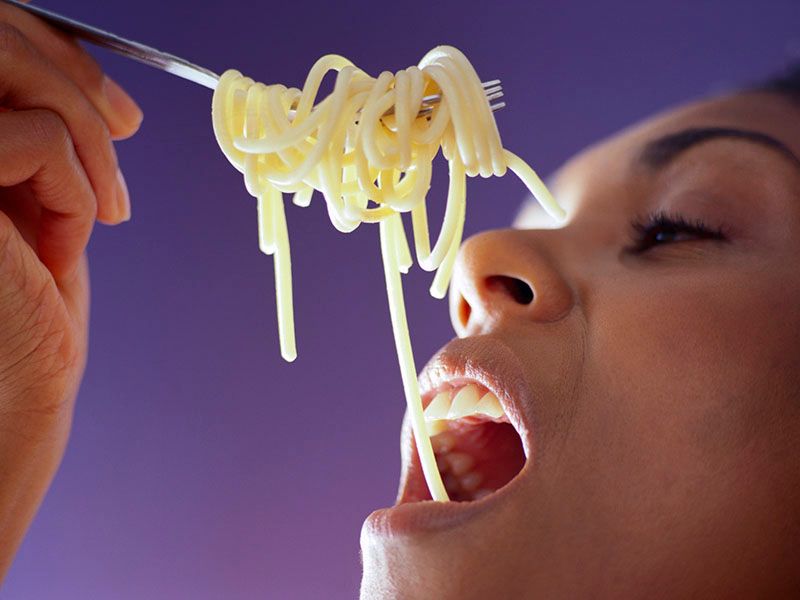 Do You 'Wolf Down' Your Food? Speedy Eaters May Pack on More Pounds

Are you the type to linger over a meal, or do you tend to eat quickly without giving it much thought?

New research confirms that you're better off going the slow route, because fast eaters tend to consume more and be more vulnerable to gaining weight and becoming obese. And it uncovers a new wrinkle: If you grew up with siblings, where you probably had to compete for whatever was on the table, you're more likely to be a fast eater.

Speedy eating makes you prone to eating more because it takes a bit of time for your body to recognize that you're starting to feel full, explained Connie Diekman, a St. Louis-based registered dietitian and former president of the Academy of Nutrition and Dietetics.

"We don't recognize that feeling of fullness immediately because the body is programmed to sensing, 'I need to eat, I ate enough, stop eating,'" Diekman said. "If we don't allow that to happen because we're eating too quickly, we tend to end up overeating."

Fast eaters may learn the habit when they are children, so researchers from the University of Roehampton and the University of Bristol in the United Kingdom sought to determine if having siblings may play a role in influencing one's eating speed.

Though the findings, published online recently in the journal Clinical Obesity, were somewhat confusing, they did show that children with siblings were more likely to have a faster eating rate.

There are a couple of reasons why the presence or absence of siblings may influence one's eating rate, according to study co-author Leigh Gibson, a researcher in the department of psychology at the University of Roehampton in London.

The sibling-fast eating connection "might be due to competition for food at meals, whether real or imagined, or even a wish to finish a meal more quickly to return to playing with siblings," Gibson said. "Alternatively, the presence of siblings at a meal could distract from a focus on eating, which could lead to a faster eating rate."

Whatever the reason, it doesn't seem to be too much cause for concern, as prior studies have found that people without siblings seem more vulnerable to obesity than people with siblings.

"It would seem that sibling-induced faster eating is unlikely to promote long-term overeating, given other evidence that only-children are more at risk from becoming overweight or obese than those with siblings," Gibson said. "On balance, eating faster may be a risk for weight gain and obesity, but sibling influence is probably not a mediating factor. Perhaps the 'sibling effect' doesn't directly result in bigger meals, just meals eaten more quickly."

Diekman, who was not involved in the new research, noted that the study concludes that more research needs to be done on the link. The takeaway is not: "If you have a lot of children, watch how your children eat because it may impact them and they may eat too quickly," Diekman said. "I'm not sure we are there yet."

To come to the findings, Gibson and his colleagues conducted two studies. The first study involved over 100 children between the ages of 5 and 11, and compared the children's eating rate (as reported by their parents) to their body mass index, the number of siblings they had and where they were in the birth order of their family. The second study looked at over 800 adults and children and collected similar information, but the eating rate in this study was self-reported.

Interestingly, even adults who grew up with siblings seemed to continue the habit of fast-eating into adulthood, suggesting that it is a behavior that persists.

"There's a lot of conversation that says society does this to adults -- drive-through food, eating quickly at work because you've got to get back to your desk, all of these things," Diekman said. This study might make people reflect more on the 15-minute lunches that some kids get at school because it "might be setting them up for a habit of eating quickly," she noted.

Diekman added that she often counsels patients trying to slow down their eating speed as a part of their weight-loss goals. She said that the key is to pay attention to the food you're eating.

"We need to look at our food because that starts the process of, 'Oh, this is going to fill me up. I'm going to enjoy that,'" Diekman said. "We need to smell it because that begins to trigger the, 'Oh, this is going to be good.' And then in the mouth, we need to chew it so that we get that sensation of 'I'm filling my body.' That will help us eat more slowly and therefore consume less."

Visit the U.S. Centers for Disease Control and Prevention for more on obesity.