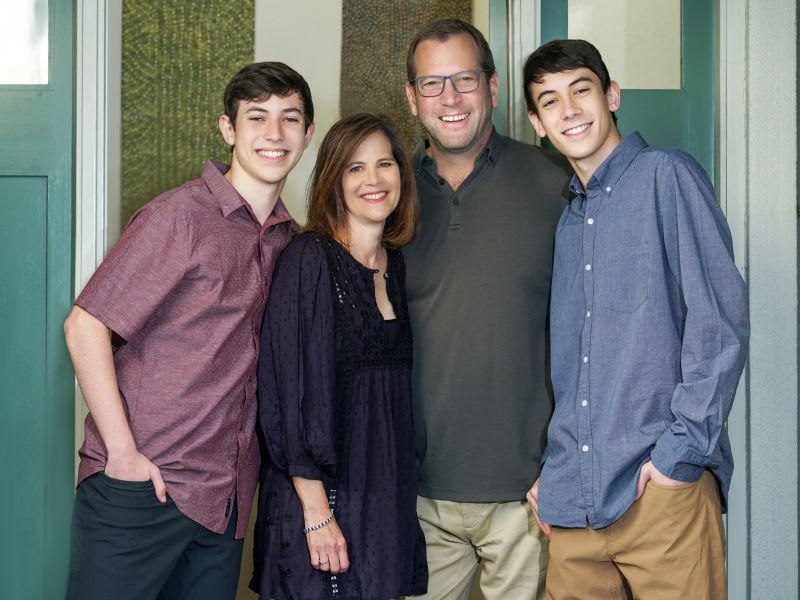 Marc Baum went through all the usual steps to treat his bladder cancer -- a couple of surgeries, radiation therapy and chemotherapy, all in a three-month period.

But doctors hope that an extra step -- an experimental vaccine -- will be what keeps Baum's cancer from coming back.

A vaccine that uses genetics to teach a person's immune system how to precisely target the cancer has proven safe and feasible in early clinical trials, according to results just reported at the American Association for Cancer Research's (AACR) annual meeting.

Baum and 12 other patients received a series of 10 custom-designed vaccinations over the course of six months.

Baum, 57, of San Jose, Calif., shrugged off the shots, which caused no side effects for him.

"It was fairly uneventful," he said. "It's pretty innocuous."

Lab tests showed that the shots did promote an immune system response, although it will take larger follow-up trials to judge how effective the inoculation will be at killing free-floating cancer cells, said lead researcher Dr. Thomas Marron, assistant director for early phase and immunotherapy trials with the Tisch Cancer Institute at the Icahn School of Medicine at Mount Sinai in New York City.

"We can actually show over time the education of the immune system," Marron said. "You can see the number of T-cells, which are the white blood cells of your immune system, slowly increase over time."

Cancer tends to recur because even the most thorough treatments leave microscopic cancer cells behind that can't be seen in imaging tests, Marron said.

Cancer research has been looking at ways to use the immune system to find and kill these cells, but the side effects of immunotherapy can be terrible as a revved-up immune system does damage to normal tissues as well as cancer cells.

Fighting a variety of cancers

With this latest approach, researchers performed in-depth genetic analysis of a person's tumor as well as their healthy tissue. They then used a computer to look for specific abnormal proteins that occurred only in the person's cancer cells.

"We figure out what are the things that are unique to the tumor compared to the rest of you," Marron said. "We can identify the 10 top things that are going to be most likely to teach your immune system what to recognize."

The team then creates a vaccine from what they've learned about you and your tumor.

"We make synthetic proteins in the lab that look like the proteins from the tumor, and then we vaccinate you with those," Marron said. "This vaccine's goal is to teach your immune system to recognize your cancer's foreign proteins, so your immune system can, for example, differentiate between your lung cancer and the normal lung tissue."

A 10-shot course is needed because the cancer cells are so similar to your own, Marron said.

"After six injections, we can barely see anything, but after 10 injections -- which is the full six-month treatment -- that's when we see a really robust anti-cancer response from your immune system," Marron said.

The 13 participants in this early trial suffered from a variety of different cancers -- multiple myeloma and cancers of the breast, bladder, lung and neck, Marron said.

Baum was diagnosed in March 2018 with bladder cancer after finding blood in his urine. Scans revealed a small lesion on his bladder.

"That's all it takes," Baum said. "It hadn't spread anywhere, but it was on the verge."

Baum has remained cancer-free since his treatment ended in July 2018, but participated in the vaccine trial because as a computer and electrical engineer he wanted to contribute to science.

Such a vaccine is a "very promising approach" that could attack cancer without the serious side effects that come from current cancer therapies, said Dr. Neeha Zaidi, an assistant professor of oncology with Johns Hopkins in Baltimore.

"Because we are targeting specific proteins that are only expressed on the cancer cells and not on a normal cell, we're actually able to mitigate a lot of the side effects that we get with immunotherapy and even chemotherapy," said Zaidi.

"The next steps will be looking at its efficacy, in terms of how robust it is in actually shrinking a tumor or causing a clinical response," Zaidi continued.

Two trials already are underway using this technology, one with brain tumors and another with bladder cancer, Marron said.

Because these vaccines are highly personalized, they are also pretty pricey, Marron noted.

But the ultimate hope is that further genetic testing eventually will reveal specific abnormal proteins that are shared across different types of cancer, Marron said. Researchers then could create an "off-the-shelf" vaccine that could teach the immune system to fight multiple cancers.

"If we could use everything we're learning and apply that to an off-the-shelf vaccine we would be able to make for much less money and use much more widely without having to do all these fancy genetic tests on the tumor and the patient, that obviously would be super exciting," Marron said.

These findings were presented Saturday at the AACR's annual meeting, held virtually. Findings presented at medical meetings are considered preliminary until published in a peer-reviewed journal.

The National Cancer Institute has more about immunotherapy for cancer.