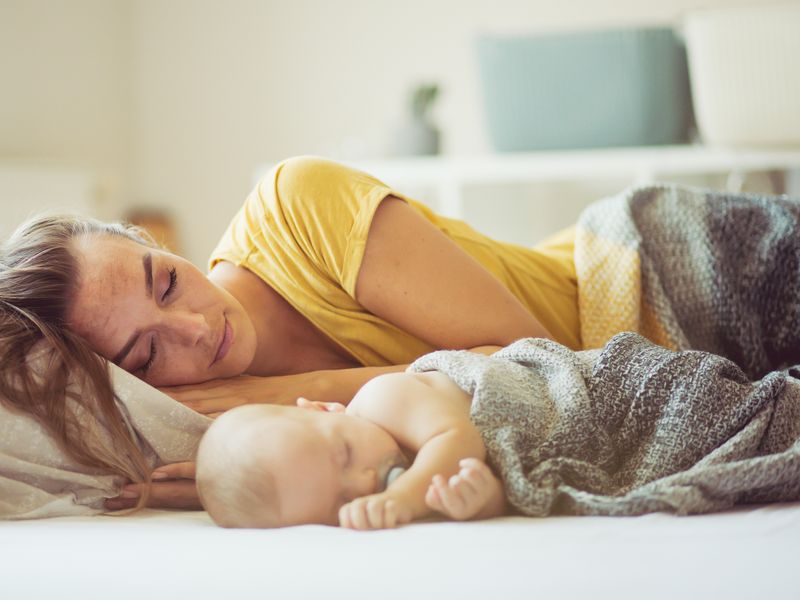 Whether to share your bed with your infant at night has been the subject of heated debate: The American Academy of Pediatrics (AAP) advises against it, recommending room-sharing but not bed-sharing, while others promote the practice as part of an idea called attachment parenting.

Now, a new study finds bed-sharing did nothing to boost mother-infant bonding.

"I wanted to study this issue because this is one of the most controversial topics in infant sleep research," said Ayten Bilgin, a lecturer in development psychology at the University of Kent, in England.

"Our main finding is that parental bed-sharing during the first six months does not affect secure attachments of the baby and the mother, and also mother's bonding with the baby," Bilgin said.

The study analyzed data from 178 infants and their parents from a mix of questionnaires and in-person visits, at term and then again at three, six and 18 months.

The study found no associations between sharing a bed with baby during the first six months and maternal bonding, infant-mother attachment, sensitive parenting and infant behavioral outcomes (such as attention levels, hyperactivity and task persistence at 18 months).

These findings, which were published online recently in the Journal of Developmental & Behavioral Pediatrics, may help ease parents' concerns when choosing not to share a bed with their infant.

"I think as long as the parents have interactions during the day with their baby, then there shouldn't be any worries about their bonding or attachment," Bilgin said.

The researchers said there has been little research in this area and the evidence is quite mixed. They also said that about one-third of all parents in this latest study shared their bed with an infant during the first 18 months occasionally or on most nights, because of ease of breastfeeding and dealing with night waking.

The study did note there is consistent evidence that risk of sudden infant death syndrome (SIDS) increased when infants shared a bed with their parents, even without hazardous situations. That was further increased if there was parental use of alcohol, drugs, cigarettes or sleeping on a soft surface. This is particularly a concern for young infants up to the age of 4 months, Bilgin said.

In the safe sleep recommendations listed on its website, the AAP noted that 3,500 infants die in the United States each year from sleep-related deaths. While the AAP recommends against bed-sharing, that doesn't mean infants should sleep in a different room. The group also recommends infants sleep in their own crib in the same room as their parents for at least six months but preferably for a full year.


The March of Dimes' position is also that the safest place for baby to sleep is by himself or herself in a bassinet or crib, said Dr. Rahul Gupta, senior vice president and chief medical and health officer for the March of Dimes. Multiples should be placed in their own bassinets or cribs, not sharing the space. Infants should always be placed on their backs to sleep. Their bed should be firm. Positioners, crib bumpers, loose bedding, toys and other soft objects should not be in their crib.

"It's really important that not bed-sharing does not equate to not room-sharing," Gupta said.

"That's a simple way of saying that, just because the baby may not be in your bed, doesn't mean the baby is not with you. And giving the baby their own space to sleep and making it safe and quiet and comfortable is sometimes the best thing you can do for your baby, and then you be right there," he added.

"The mother-baby dyad is really important. That bonding is really important. And having your baby sleep in a bassinet for those few hours that you're sleeping, there's all kinds of reasons that that's a good thing, the least of which, it will not cause difficulty, it seems from the study, in bonding," Gupta said.

It will be important to do continued research, he noted.

Bilgin agreed there is more work to do.

"It's very early to make any definitive projections or conclusions on this issue," Bilgin said, because of limited existing research. "I hope that I will do further studies using different samples."

The American Academy of Pediatrics has more about safe sleep for infants.