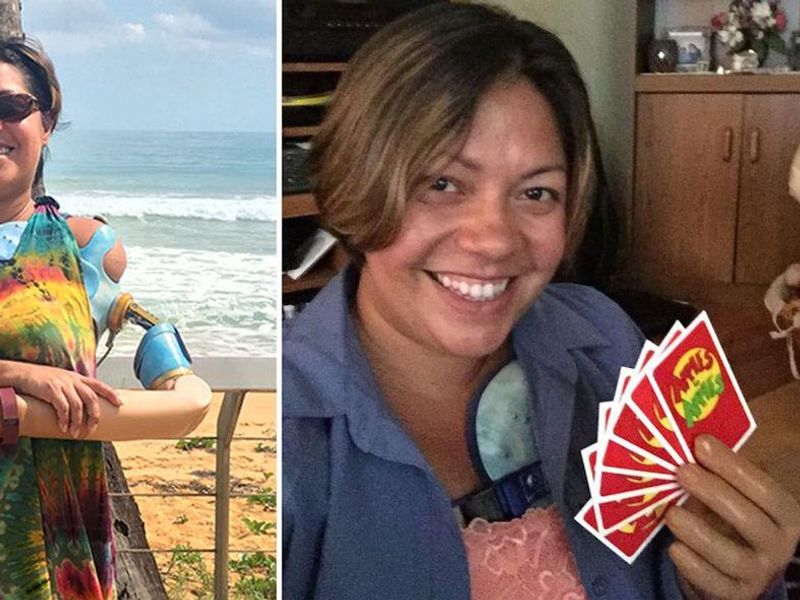 A 'Bionic' Arm That Feels Like Her Very Own

Former Marine Cpl. Claudia Mitchell can hold a banana or a water bottle in her left hand without squishing it as she opens it.

She can use her left hand to help cut peaches for a pie. She can hold someone's hand without squeezing too hard, and she can grab her makeup bag with just her thumb and forefinger.

Years ago, Mitchell, 41, wouldn't have imagined any of these feats were possible -- because her left arm is a bionic prosthetic.

But Cleveland Clinic researchers have used cutting-edge technology to turn her Veterans Affairs-supplied prosthetic into an arm that actually acts and feels like her own.

Using an array of sensors and robotic motors, Mitchell's arm provides feedback that lets her know without looking how hard she's holding an object, which fingers she's using at any given time, and how fast her limb is moving.

"It doesn't matter how cool the arm is, if you don't know what it's doing unless you're looking at it, you are still losing something," said Mitchell, who lives about 160 miles northwest of Little Rock, Ark. "They're bringing back that feedback, which we didn't have before. It stops this from being just a machine that's on your arm that's a tool that you use, like a drill, and it helps it become part of you."

The system integrated into Mitchell's arm combines several advances experts have been working on for years into a single prosthetic, said lead researcher Paul Marasco, leader of the Cleveland Clinic's Laboratory for Bionic Integration.

Researchers said this is the first prosthetic system that performs three sensory and motor functions at the same time, using an interface that connects with the person's residual limb nerves.

Patients send nerve impulses from their brains to the bionic arm when they want to use it or move it. When the arm touches something, it relays the information back to their brain through the nerves.

"They think about moving it, it moves. It provides sensation of touch when they touch things. And it provides a really interesting perception of hand movement," Marasco said. "When they close that prosthesis down, they can feel all of the fingers of their hand closing down into a fist."

A report on the new system was published Sept. 1 in the journal Science Robotics.

Mitchell lost her arm in a May 2004 motorcycle accident, when the driver lost control on a tight corner. A guardrail severed her arm near the shoulder.

She's been working with Marasco and his team since 2006. The researchers regularly tinker with her prosthesis, adding new technologies that improve its capabilities.

The back-and-forth communication Mitchell has with her bionic arm occurs through nerves on the muscles and skin of her stump. They have remained active even though she lost her real arm.

"Those nerves grow out into the skin and muscle, and they essentially re-establish a connection," Marasco said. "Even though your hand's not there, the nerves that used to connect to your hand are connected to muscle and skin, and so your brain doesn't really know that your hand's not there at that point."

Every time someone thinks about moving their hand, those muscles twitch a little bit in different ways, Marasco said. Sensors in the arm detect those twitches and translate them into movement.

Where it touches the skin, the bionic arm also contains a number of robotic motors. Those motors move and vibrate to create the sensation of touch and movement in the person's brain, Marasco said.

"When they close their hand down, we can find different places that represent different types of hand movements, and we will match the hand movement that the prosthesis makes to a site where we can generate the same movement inside their muscle," he said.

When it's turned on, it causes a perceptual illusion of movement and represents the activity of all of the fingers of their hand behaving in a coordinated fashion, Marasco said.

"It's totally bananas, and it's so hard to explain, but your brain really feels like, 'Oh yeah, I can feel my hand moving," he said.

The upshot is that Mitchell and others are able to perform tasks with their bionic arm about as accurately as people who still have their natural limb.

In fact, researchers saw that the patients' brain activity and behaviors changed to match those of a person without an amputation. They no longer needed to watch their prosthesis; they could find things without looking and could more effectively correct for mistakes.

"They made judgments, decisions and calculated and corrected for their mistakes like a person without an amputation," Marasco said. "With the new bionic limb, people behaved like they had a natural hand."

For Mitchell, who traveled the world as a dive instructor before the COVID-19 pandemic, the new technology has been a revelation.

"It gives this motional connection with your arm that you don't understand needs to happen until you've had to live without it for a long time," she said.

Mitchell's arm is the result of two decades of advancements in prosthetics that "have helped wearers to achieve better functionality and manage daily living on their own," Marasco said.

"For the first time, people with upper limb amputations are now able to again 'think' like an able-bodied person, which stands to offer prosthesis wearers new levels of seamless reintegration back into daily life," he said.

The Cleveland Clinic has more about its Laboratory for Bionic Integration.