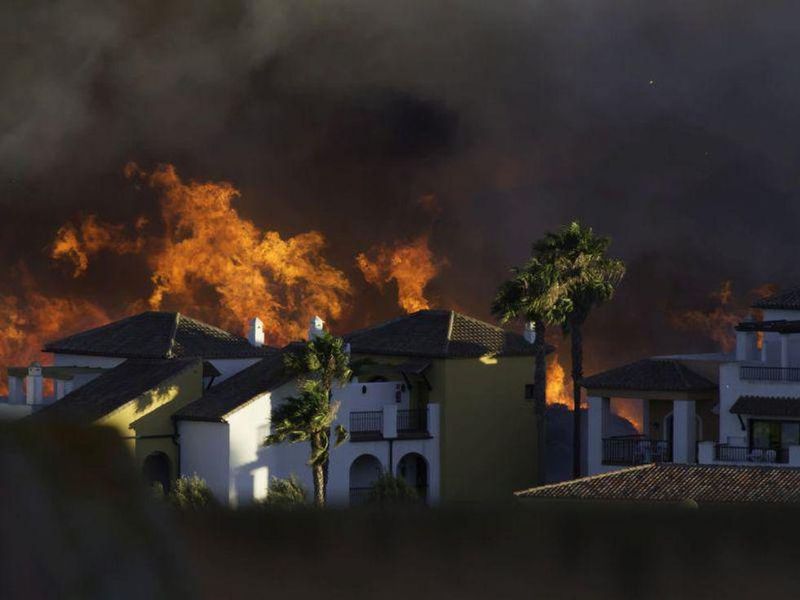 Wildfires and rising temperatures are exposing more and more Americans to an air pollution double-whammy of smoke and smog, a new study warns.

Researchers found that over the past 20 years, a growing number of people in western states have been simultaneously exposed to high levels of two kinds of air pollution: Fine-particle pollution generated by wildfires, and ground-level ozone.

Ground-level ozone is the main ingredient in smog, and reaches its highest levels on hot, sunny days.

The study found that between 2001 and 2020, exposure to high levels of that combined air pollution rose substantially in western states -- by 25 million "person days" each year. That is a measure that considers both the number of people affected and the number of days of exposure.

On their own, each type of air pollution can have health effects, said researcher Deepti Singh, an assistant professor at Washington State University, in Vancouver, Wash.

Over the short term, they can make it harder to breathe, and aggravate existing heart disease or lung conditions like asthma.

And research suggests that simultaneous exposure to both types of air pollution may compound the damage, Singh added.

In 2020, wildfire activity in the United States was "well above" average, according to the National Interagency Coordination Center. That was largely because the fires were big, burning over 10 million acres altogether. It's part of a trend in recent years toward larger wildfires and prolonged fire seasons.

One driver of the increase is climate change, said Kristina Dahl, a senior climate scientist with the nonprofit Union of Concerned Scientists. Rising temperatures and drought mean more dry grass, brush and other vegetation -- and more "fuel" for wildfires.

Then there are the "fire-suppression" policies that have allowed the overgrowth of that natural fuel, Dahl said.

The fires themselves take lives and destroy property, while smoke plumes darken the skies of entire regions. But air pollution from western wildfires can also spread thousands of miles, Dahl said, even affecting air quality on the East Coast.

Much of the research on that pollution has focused on particulate matter. What's unique about the new study, Dahl said, is that it looked at people's combined exposure to wildfire and ozone pollution.

That's important because wildfires do not emerge in a "vacuum," noted Dahl, who was not involved in the research.

The findings, published recently in the journal Science Advances, are based on air quality data from U.S. and Canadian government monitoring stations for 2001 through 2020. The researchers tracked people's exposure to days where both fine-particle pollution and ground-level ozone were especially high -- in the top 10% of their annual levels.

Over time, the researchers found, those dual exposures became more common over large areas of the West, specifically during the late-summer wildfire season. And the trend was largely driven by a shift in the "seasonality" of particulate matter extremes.

In western states, Singh explained, particulate matter has traditionally been highest during colder months -- when ozone pollution is naturally lower. But summer wildfires have upset that dynamic, causing more "co-occurrences" of both types of pollution.

Much of the increase has happened since 2015, coinciding with hot, dry summers and widespread wildfires.

In August 2020, there was a single day where over 68% of the western United States was exposed to extremes in both types of pollution -- representing about 43 million people, the researchers noted.

"And we can expect these exposures to keep increasing," Singh said.

That's not to say nothing can be done. Since climate change is a driver, Dahl said that one key solution is to reduce emissions of heat-trapping greenhouse gases. They are released when fossil fuels are burned for electricity, heat and transportation.

Singh and Dahl both pointed to another way to combat wildfires: "prescribed burns." That refers to planned, carefully controlled fires that reduce the dense, dry vegetation feeding wildfires.

Those fires can themselves affect air quality, Dahl noted. But by reducing the chances of large wildfires, she said, it may be a case of an ounce of prevention being worth a pound of cure.

AirNow.gov has more on fires and air pollution.