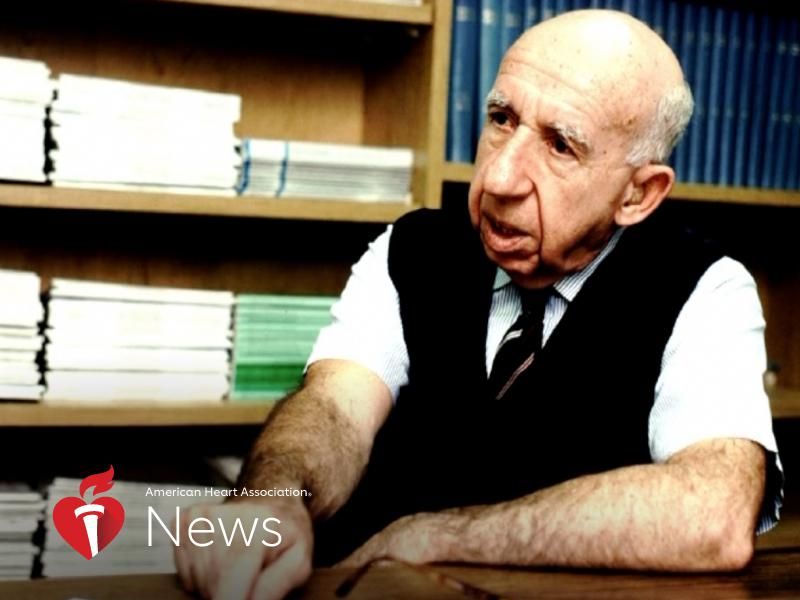 Dr. Jeremiah Stamler, a trailblazing cardiologist who helped people understand the critical connection between healthy lifestyle and heart health -- and who continued his passionate work well beyond his 100th birthday -- died early Wednesday.

Stamler, known as "the father of preventive cardiology," was 102. He died at his home in Sag Harbor, New York.

A pioneer in helping to curb the epidemic of hypertension, Stamler in the 1970s put the cardiovascular risk factors of high cholesterol, high blood pressure, diabetes, a high-fat diet and smoking on the map. His findings were considered controversial and were met with opposition, but he stuck by his research.

Colleagues credit his work as a major force behind the significant decline in heart disease death rates since the 1960s.

"It is no exaggeration to say that few people in history have had as great an impact on human health," said Dr. Donald Lloyd-Jones, chair of the department of preventive medicine at the Northwestern University Feinberg School of Medicine in Chicago and president of the American Heart Association. "Jerry was a giant intellect and led in defining new prevention concepts right up until his last days. He was always innovating, and he was a kind and gentle soul who believed in people."

Known for his love of science and research, Stamler's typically calm demeanor endured whether he was facing opposition to his groundbreaking research from fellow scientists and corporations -- or even intimidation from a congressional committee attempting to out Communist sympathizers.

Stamler was the founding chair of the preventive medicine department at Northwestern University, where he was still working on cutting-edge research at the time of his death. He trained and mentored hundreds of health professionals around the world. He authored and co-authored over 2,000 peer-reviewed manuscripts, studies and books that have shaped U.S. public policy for decades, and he was a relentless activist for the causes he cared about.

Stamler was a major proponent of a Mediterranean-type diet -- which is rich in fruit, vegetables, olive oil and fish and low in sugar, salt and saturated fat -- and credited his approach to eating for his good health.

"He lived exactly what he preached, and it worked out very well for him," said Lloyd-Jones. "He took his science very seriously, but he also had a wonderful sense of fun. He would say, 'If it isn't fun, it isn't epidemiology.'"

Stamler was the son of Russian immigrants. He was born in Brooklyn in 1919 and grew up in West Orange, New Jersey. His exposure to healthy eating decisions came very early. Stamler had said his father turned his nose at white bread after arriving in the U.S., instead feeding his family a diet of hearty ryes and whole grains.

He attended Columbia University and earned his medical degree from the Long Island College of Medicine in 1943. He entered the Army after medical school and served as a radiologist in Bermuda as World War II wound down.

He then moved to Chicago with his first wife, Rose, and took a job in a lab working on cardiovascular issues with pioneering cardiology researcher Louis Katz.

Stamler explored the interactions of diet, hormones, blood pressure and lipids in vascular disease. Rose, a sociologist by training, also became a major force in cardiovascular disease and hypertension research.

His research focused on the tiny molecules our bodies make based on diet, environment and genes, and how those molecules can lead to health problems. Ultimately, his research yielded findings now taken for granted: High blood pressure and high cholesterol are both linked to cardiovascular disease.

In 1958, Stamler joined Northwestern University's department of medicine as an assistant professor. He also took a position in Richard J. Daley's Public Health Department, bringing his expertise to city government. With risk factors identified, he was ready to put what he'd learned into practice through prevention.

He created a Heart Disease Control Program, worked on rheumatic fever prevention in kids, and encouraged Chicagoans to broil and roast their food instead of fry, while suggesting they eat more vegetables, fruit and seafood. He held fast to his convictions despite pushback from heavyweights such as the American Meat Institute.

In 1965, Stamler came head-to-head with Congress when he was called to testify before the House Un-American Activities Committee, which was organized to out suspected Communist sympathizers.

While most who were called either complied or pleaded the Fifth Amendment, often seeing their careers destroyed either way, Stamler found a bold third option. He refused to answer the committee's questions and filed suit against the committee.

After 8 1/2 years of litigation, the committee backed down -- and eventually disbanded altogether thanks in large part to Stamler's case.

"He had the strength of character to fight what they were doing," said Lloyd-Jones. "It's a remarkable testament to his career and deep-seated passion to do what was right."

After Rose died in 1998, Stamler married his childhood sweetheart, Gloria.

He maintained that love is critical to physical health even though "it's almost impossible to research," he said in 2019.

The couple split their time between New York, a home in Italy and Chicago, where Stamler reviewed peers' research into his 100s, receiving documents by fax. Lloyd-Jones said "his comments were solid gold. He was sharp right up to the end."

Others remember him as a force for truth that never backed down. "I loved working with him since I always knew he would make our research better, clearer, more relevant and more impactful," said Dr. Philip Greenland, a preventive cardiologist and former chair of the department of preventive medicine at Northwestern. "The world owes him a great deal."

Linda Van Horn, a professor and research nutritionist at Northwestern University's Feinberg School of Medicine, joined the department as a research nutritionist with Stamler in the late 1970s. "I became so fascinated with the work he was doing, and his endless scientific nutritional hypotheses, that I literally never left," she said. Just last week she asked Stamler for feedback on a new paper regarding one of his studies.

His enthusiasm was infectious and his humility was endearing, she said, and he loved to eat. At restaurants, he would discuss the meal he had just enjoyed with the chef. He spoke to taxi drivers no different than the head of the National Institutes of Health.

"He was a straightforward, unpretentious man who valued people for whatever their interests in him were," Van Horn said.

In a message board to honor his memory, former Centers for Disease Control and Prevention Director Dr. Tom Frieden wrote: "Jerry's spark, dignity, brilliance, hard work, and commitment have saved many lives, and continue to inspire and inform the world."

At Northwestern when Stamler turned 100, dozens of colleagues honored him at a party, complete with a massive, three-part "100" cake.

The department he founded is celebrating its 50th anniversary this fall, and his presence will be felt.

"We'll celebrate Jerry's life and his incredible legacy," Lloyd-Jones said. "And it is quite a legacy. He's one of my heroes."