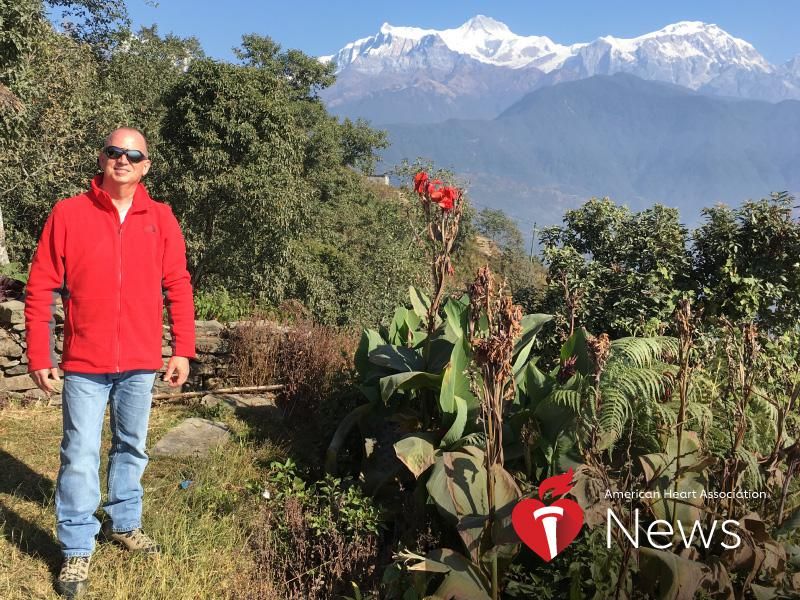 AHA News: After a Spinal Cord Stroke Left Him Paralyzed, He Vowed to Walk Again

Having been a flight engineer during operations Desert Shield and Desert Storm, Jeffrey Morse knew resilience.

He knew headaches and migraines from his past.

But in the summer of 2012, it felt like someone was ripping the skin open on the back side of his neck with searing pain pounding in his head. This was a migraine like no other in his past and the pain was much worse. Light hitting his eyes made it even more excruciating.

The doctor could tell right away that Morse was in severe distress. An elevated heart rate and blood pressure confirmed it.

Within the hour, Morse was in an ambulance on the way to the emergency room. Tests revealed several problems below his brain.

The immediate concern was an aneurysm, a bulge in one of his arteries that was weakening. If the aneurysm burst, it would cause a potentially fatal stroke. Above the aneurysm was a dissection, or tear, in the wall of the artery.

Morse needed more specialized care than his local hospital could provide. He was transferred to Charlotte, where doctors performed surgery to repair the aneurysm.

When Morse woke up after surgery, he couldn't move his arms or legs. He felt like he was in a coffin, buried alive. When he inhaled, it felt like a thick leather belt was tightening around his chest.

The surgeon told Morse that although all went well in repairing the aneurysm, something else went wrong. During the surgery, Morse had a stroke on his spinal cord that left him paralyzed.

"More than likely, you will never walk again," the doctor told him.

"Watch me," Morse responded. "I will walk out of this hospital."

His comeback began in the hospital's rehabilitation center.

Physical and occupational therapy often left Morse exhausted. Yet as much as he craved sleep, he dreaded its arrival. Closing his eyes without being able to feel his body triggered the sensation of non-existence.

In time, he learned to use his thoughts to control parts of his body. His left big toe moved first. Then his right hand. Strangely enough, while he could see the movement, he couldn't feel it. Still, he'd done it. He was moving.

Along the way, Morse started setting goals. He told his family he would walk again and that he'd be with them in Paris at the end of the year. He'd eventually write a book. He'd get back to work as an airline instructor.

To drive toward these goals, he changed his mindset. He took leaps of faith with a can-do objectiveness, stopped thinking of the past and the old him, focused on the present and kept "I can't" out of his vocabulary. He also relied on the message he learned during military survival school: Survive and adapt.

On Aug. 9, 2012, Morse left the hospital using a walker to propel limbs he could not yet feel. He met the goal he said he'd achieve the day he awoke paralyzed.

That December, he indeed traveled to Paris with his wife and other family members. He walked haltingly, and in intense pain, yet the joy of being there was worth it.

For the next few years, Morse tried anything and everything to ease his extreme pain and smooth his gait. This included massage therapy, chiropractic care, acupuncture, Pilates, tai chi and yoga.

He also began working with Jackie Murray, a licensed neuromuscular massage and bodywork therapist. One of her specialties is loosening tight muscles and connective tissue. That in turn makes other therapies more beneficial.

The first time Murray met Morse, "he was very rigid, physically and emotionally."

"He was focused on what he couldn't do anymore and on powering through everything," she said.

Where he saw limits, she saw progress.

"You need to start telling yourself that you're OK," Murray told him. "You survived incredible odds. And you're walking!"

No one had said he was OK in this condition. He certainly never thought so.

Hearing her say it changed his perspective.

Fast forward to today, and Morse has fulfilled all his hospital goals.

"His story, his will and his drive -- it's just incredible, especially once he embraced his condition and worked with it instead of fighting it," Murray said. "He inspires me every day."