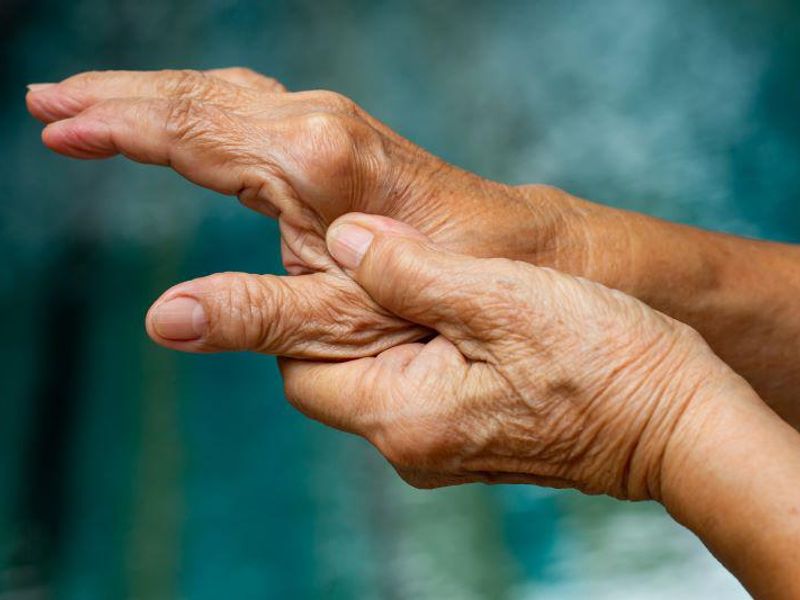 Injections of Your Own Fat Could Help Arthritic Hands

Liposuction typically is used to flatten your stomach or shape up your booty, but a new study argues that it could also help people suffering from arthritis of the fingers.

Injections of body fat into aching, arthritic finger joints appear to produce significant and lasting improvements in hand function and a decrease in pain, German researchers report in the May issue of the journal Plastic and Reconstructive Surgery.

People who underwent the experimental procedure started with pain levels of 6 points on a 10-point scale, but three to four years later reported their finger arthritis pain at a median 0.5 points, according to results from their small-scale pilot study. Median means half had higher pain levels, half lower.

"That was for us the most striking result, if you manage to decrease the pain," said lead researcher Dr. Max Meyer-Marcotty, a plastic surgeon with the Lüedenscheid Clinic in Germany. "To go from level 6 to 0.5 even after almost four years is really kind of amazing."

Finger osteoarthritis occurs as a result of normal wear and tear. The cartilage in finger joints breaks down and wears away over time, allowing the ends of bones to rub together, causing pain and stiffness.

Meyer-Marcotty and his colleagues were the first to attempt this nonsurgical procedure, which they started offering in 2014, he said.

They use liposuction to draw fat from the patient's thighs or buttocks, and then spin it in a centrifuge to separate the pure fat from water, oil and blood that's also in the sample.

Tiny amounts of fat are then injected into the patient's aching finger joints, using X-ray monitors to make sure the syringe gets into the proper places, Meyer-Marcotty said. The procedure is called lipofilling.

"There's no stitching, no wound closure, nothing like that," he said. "We put a Band-Aid on it, and give it a rest for one week in a splint. Then the patient is counseled to remove the splint and start movement without stress for another two to three weeks."

By week four, the patient is able to use the treated fingers as they normally would, Meyer-Marcotty concluded.

The new paper reports how the procedure fared in 28 finger joints among 18 patients treated between December 2014 and May 2015, as part of a pilot study.

Participants reported a large reduction in pain, and researchers also noted an improvement in their ability to close their fist and to grip objects by pinching fingers together.

The patients suffered no infections or other complications as a result of the procedure, researchers reported.

But Meyer-Marcotty noted that not all patients experienced relief from the lipofilling.

Researchers also aren't sure how long the relief lasts, and how often a patient might need to come in for a repeat procedure.

"At this point I've done repeated injections, but mostly it's a one-time treatment," Meyer-Marcotty said.

It's not completely clear why the procedure helps some patients, but Meyer-Marcotty has a few theories.

It could be that the fat simply lubricates the joints so they work more smoothly, but it also could be that stem cells in the fat either prompt the healing of worn-down cartilage or a reduction of inflammation in the joint, Meyer-Marcotty said.

The German researchers aren't the only ones investigating the use of body fat to treat joint problems, said Dr. Jacques Hacquebord, an associate professor of orthopedic surgery at NYU Langone in New York City.

"We have actually started doing a study ourselves, not for arthritis but for tennis elbow," he said. "That concept of fat-derived stem cells is something that's been looked at and been used."

The procedure is costly and not covered by insurance, Hacquebord said.

Whether lipofilling is worth trying depends on the usual treatment option you'd otherwise choose, he added.

Steroid injections into arthritic joints are cheap, easy and effective, "so when you compare this to steroid injections, then the threshold you're placing for yourself to show efficacy is very high," Hacquebord said.

On the other hand, lipofilling is much easier, cheaper and noninvasive compared to surgical options for finger joint arthritis, Hacquebord said. Surgical options include fusing or replacing the joint, or transferring tendons from other parts of the body to the fingers.

"If you're saying this is going to be an improvement compared to surgery, that's an easier difference to show," Hacquebord said.

The Cleveland Clinic has more about hand arthritis.