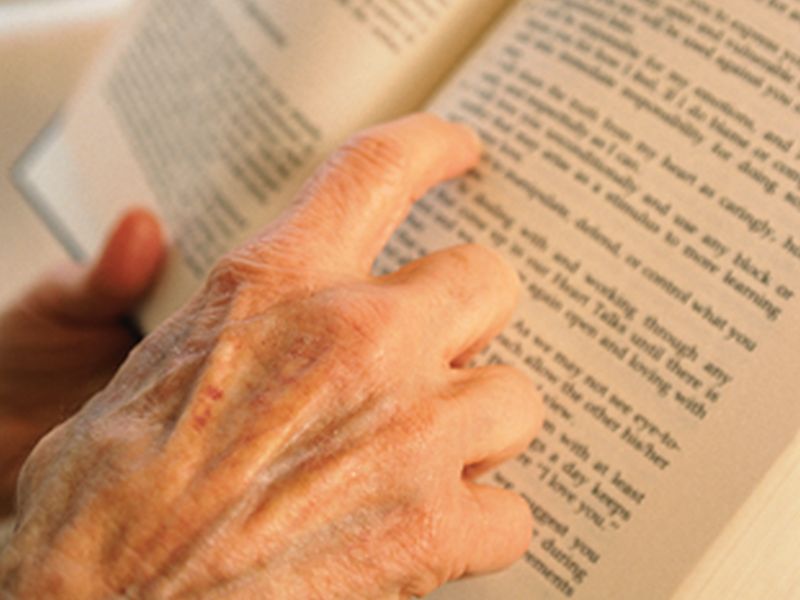 People with chronic dry eye may find the condition slows them down when they have to read beyond a couple of paragraphs, a new study suggests.

Researchers found that compared with people without dry eye, those with the condition read at a slower rate when they were tasked with a 7,200-word passage.

The study authors said that traditional reading tests given during eye exams -- at around 75 words -- may miss the difficulties that dry eye can cause with prolonged reading.

Chronic dry eye is common, particularly after the age of 50. Nearly 5 million Americans in that age group have the condition, according to the American Academy of Ophthalmology (AAO).

The symptoms of dry eye include burning, redness, stinging or a gritty feeling in the eyes; sensitivity to irritants like wind or cigarette smoke; and excessive tearing, as the eyes some/times overproduce tears in response to the dryness, the AAO noted.

It's common for people with dry eyes to complain of problems with reading, said researcher Dr. Sezen Karakus.

But those complaints do not always fit with what's seen during eye exams -- which may suggest the person's vision is fine, explained Karakus, an assistant professor of ophthalmology at Johns Hopkins University.

So the investigators decided to dig deeper, using a longer reading test developed by one of Karakus' colleagues, Dr. Pradeep Ramulu. It takes about 30 minutes to complete and basically simulates reading a book, Karakus explained.

The researchers recruited a group of adults older than 50. The group included 116 people with "clinically significant" dry eye. That meant they showed certain abnormalities on the cornea -- the transparent surface of the eye -- and differences in tear production.

Another 39 study participants complained of some dry eye symptoms, but had no abnormal eye exam findings. Finally, 31 people without dry eye signs or symptoms served as a control group.

On average, the study found, the three groups had similar reading rates on a standard, out-loud reading test. But differences cropped up when they took the silent, prolonged reading test. People with clinical dry eye read at a slower rate -- 240 words per minute, versus 272 per minute in the two other groups.

Dr. Angie Wen is an ophthalmologist at Mount Sinai's New York Eye and Ear Infirmary, in New York City. She said the findings reflect what she often sees in her practice: Patients who see well on visual exams complain of problems with "sustained visual tasks" in daily life.

Wen noted that the average slowdown on the prolonged reading test could hinder people in the "real world."

"It can really make a difference in efficiency in the workplace or enjoyment of leisure reading," she said, "especially in those who have other concurrent eye problems, such as decreased contrast acuity from cataracts."

Fortunately, Karakus said, there are treatments for dry eye. People who notice symptoms can try over-the-counter lubricating eye drops, she said -- but it's best to see an eye doctor for an evaluation.

In certain cases, Karakus said, an underlying medical condition -- like Sjogren's syndrome or rheumatoid arthritis -- might be the cause. Plus, she added, some people may do better with prescription eye drops or other treatments. For example, doctors sometimes insert tiny "plugs" into the tear ducts, to help a person's natural tears stay in the eyes longer.

In the current study, people with clinical dry eye were asked to stop taking any prescription drops for a month. That was to isolate the effects of dry eye, itself, on their reading, Karakus said.

So it's possible they would have fared better if they'd been using their prescriptions, she noted.

Lifestyle changes can also ease dry eye, Karakus said. If you wake up with dry eyes, using a humidifier in the bedroom may be wise. And if you spend a lot of time staring at a computer screen, she recommended taking a break every 20 minutes, to blink 20 times.

It's known, Wen said, that people blink less when they're at a computer, driving or performing other sustained visual tasks. So dry eye may become an increasing concern, she noted, given how much time people spend on computers and phones.

The study was published online Nov. 15 in the journal Optometry and Vision Science.

For more about chronic dry eye, visit the American Academy of Ophthalmology.