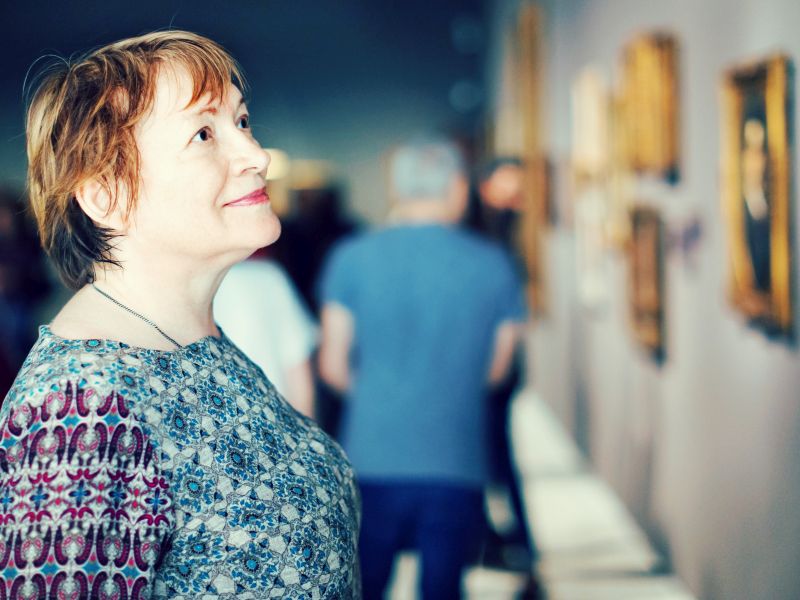 Love Museums, Theater? The Arts Might Extend Your Life

If you're a senior who loves to take in the latest art exhibit or check out a new musical, it might do more than stimulate your senses: New research suggests it could lengthen your life.

Scientists found that among over 6,700 older adults they tracked, patrons of the arts had a markedly better survival rate over the next 14 years.

People who, at the outset, devoted time to cultural activities at least every few months were 31% less likely to die during the study period, versus those who never did.

The findings do not prove the arts will extend your life. But they do add to evidence that "engaging in the arts can help promote good health," said lead researcher Daisy Fancourt, an associate professor at University College London, in the United Kingdom.

And you don't have to be the artist. According to Fancourt, a body of research suggests that "receptive" arts involvement can benefit physical, mental and emotional well-being.

Walking around a museum might not be a workout, but it does replace sedentary time on the couch. Being immersed in music, art, dance or theater can also provide mental stimulation, a balm for stress or depression, and a chance to socialize.

"Participating in the arts should not be something you do when everything else is OK in your life," said Dr. Nicola Gill, of Health Education England, part of the U.K. health service. "It should be something you do as part of everyday living. The richer your tapestry of life, the better able you are to survive and thrive."

Gill co-wrote an editorial accompanying the study published online Dec. 18 in the BMJ.

The findings were based on 6,710 U.K. adults who were, on average, 66 years old at the start. Over 3,000 said they attended arts events infrequently (once or twice a year), while 1,900 did so frequently (at least every few months).

Over the next 14 years, both groups had a lower death rate compared with people who were uninvolved in the arts. In that latter group, the death rate was 47%, versus 27% in the group that made time for the arts once or twice a year.

The lowest death rate was seen among people who frequently attended arts events -- at just under 19%, the findings showed.

Of course, there are many other differences among those groups of people, Fancourt said. Most obviously, older adults who are healthier and wealthier can more easily see concerts, plays and art exhibits.

So her team accounted for people's wealth, education level, marital status and whether they lived in urban or rural areas. And those factors did not account for the longevity edge.

Arts patrons did tend to score higher on tests of memory and thinking, have fewer disabilities, and be more physically and socially active in general.

Still, those differences explained only part of the arts-longevity link, the researchers said.

Does that mean there's something unique about the arts that promotes a longer (hopefully better) life? Not necessarily.

If you dislike museums, devoting time to them probably wouldn't benefit you, noted James Maddux, a senior scholar with the Center for the Advancement of Well-Being at George Mason University, in Fairfax, Va.

And, he said, there's nothing to say that people couldn't get similar benefits from other activities that get them out of the house and socializing -- whether that's seeing movies or sports, or taking a hike in the woods.

"I wouldn't want people to get the idea that these [arts] activities are the ones everyone should be doing," said Maddux, who was not involved in the study.

Instead, he sees the findings as more evidence that it's important to fill your life with meaningful activities.

A question the study leaves open is whether participation in the arts -- not only being an audience member -- is related to a longer life.

"Is it even better to take a painting class or dance lessons?" Maddux said. "That might enhance your experience of seeing exhibits or performances."

In addition, Fancourt's team noted, the study participants were surveyed at only one time point: It's not clear whether you would need to be a lifelong arts fan to see a longevity benefit -- or whether the same holds true for retirees who newly discover the theater.

Harvard Medical School has more on the arts and well-being.