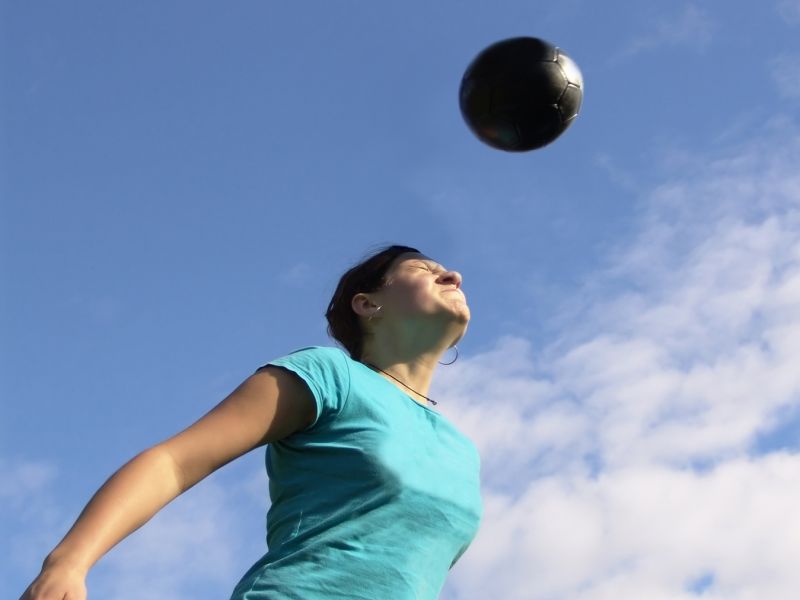 A gene mutation implicated in the risk for Alzheimer's disease might also impair memory in soccer players who head the ball a lot, a new study suggests.

The finding could have implications for young athletes in contact sports where the head can take hits during play.

Among soccer players who headed the ball the most, those with the gene mutation called the apolipoprotein E epsilon4 (APOE e4) allele did four times worse on memory tests than those who head the ball the least, the researchers found.

"This is important because heading is generally seen as inconsequential," said lead researcher Dr. Michael Lipton, a professor of radiology at the Albert Einstein College of Medicine in New York City.

"Most people have relatively modest exposure and don't seem to be adversely affected. It's really whether you have other risk factors like this gene," he said. Lipton noted that about 25% of the population carries the APOE e4 allele.

Lipton said the injuries to the brain from heading aren't concussions, but rather tiny subclinical damage that doesn't produce obvious symptoms.

Excessive heading is hitting the ball with the head at least 1,000 times in a year. That may seem like a lot, but Lipton's team found that some players headed the ball in the range of 15,000 times a year.

For the report, Lipton and his colleagues studied nearly 380 amateur soccer players who took part in a soccer study from November 2013 through January 2018. Among these players, 355 had their genes sequenced to look for the APOE e4 allele.

All the players had played soccer for five years or more, and over several visits to the clinic, they took memory tests and estimated how many times they had headed the ball. In all, 352 players with a total of more than 1,200 test sessions were analyzed.

According to Lipton, many of the consequences of heading for those who carry the APOE e4 allele aren't known. For example, it's not known whether the damage heals itself or is permanent and exactly how much heading is too much.

Dr. Sam Gandy, chair of Alzheimer's research and director of the Mount Sinai Center for Cognitive Health and NFL Neurological Care in New York City, thinks the evidence is mounting that carriers of the APOE e4 allele are in real danger of developing dementia if they play a lot of contact sports.

"I think that it is time to seriously consider how and where in the system there should be some option for educating parents about the potential risks of the APOE e4 allele, especially when two copies are present," Gandy explained.

This will be expensive and cumbersome to implement, he said. "But if we are to do all we can to protect the brains of child athletes, it seems to me that children with two copies of APOE e4 should be identified and their parents should undergo informed consent," Gandy said.

As early as 1997, Gandy and his colleagues identified the APOE e4 allele's connection with the degenerative brain disease chronic traumatic encephalopathy (CTE), which is seen in football players and boxers.

Battlefield blast exposure has been added to the list of triggers that increase the risk for CTE, and with this latest report, soccer players are also members of this "club" at high risk for serious cognitive impairment because of genetic vulnerability and repeated brain injuries, he said.

The report was published online Jan. 27 in JAMA Neurology.

Dr. Gayatri Devi is a neurologist and psychiatrist at Lenox Hill Hospital in New York City. She said, "In an increasingly competitive world, particularly in the area of sport, athletes seek an edge, sometimes at great personal cost. Using the head as a weapon or a tool comes at a cost because the cranium houses our most precious organ -- the brain within. Nature housed our soft brains in our very hard skulls for an excellent reason -- protection."

For more on the APOE e4 gene and dementia, head to the U.S. National Institute on Aging.