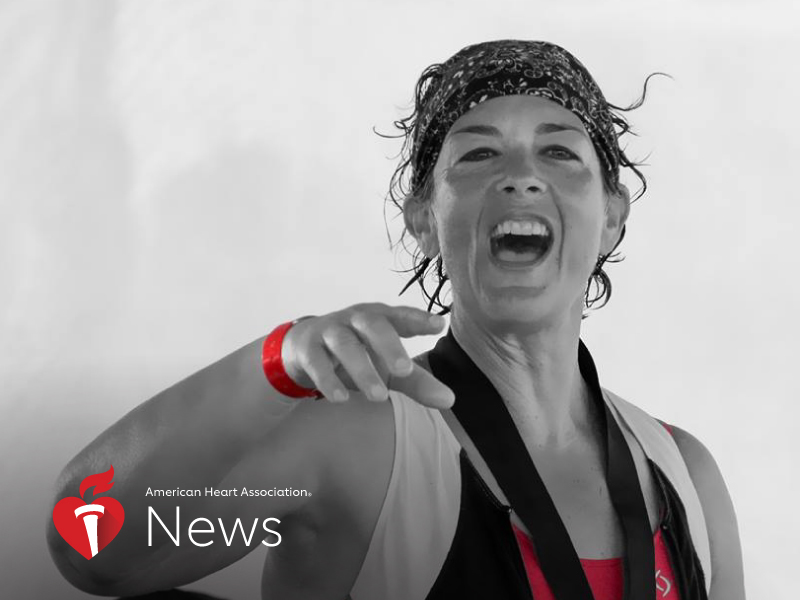 AHA News: Nearly Killed in OKC Bombing, She Vowed to Change Her Life

Still in her desk chair, a window curtain somehow wrapped around her face, Amy Downs spent six hours in the rubble of the Alfred P. Murrah Federal Building in Oklahoma City.

Even before the truck bomb detonated - ejecting her from a third-floor window and plunging her into the basement, folded into a V-shaped space with her head wedged below the knees - Amy's life was a mess.

At 28, she was an unhappily married college dropout. She'd lost her faith. She weighed 355 pounds.

Surviving was the perfect opportunity for a fresh start. If nothing else, it would've been understandable to leave a job now haunted by reminders of those who weren't as fortunate, like the pregnant woman she'd been talking to at 9:02 a.m. on April 19, 1995.

Instead, the next day, from her hospital bed, Amy finished a live interview on the "Today" show and began making work calls. As a loan officer for the Federal Employees Credit Union, she needed to help her clients - those who survived and the families of those who didn't.

As the 25th anniversary of that horrific episode in U.S. history approaches - and with it arriving during another unsettling time - Amy's devotion to her job might seem an odd focus. Except, amazing things have sprung from it.

That gal with a 0.50 college GPA earned a master's degree. The clinically obese young woman evolved into an Ironman triathlete. She renewed her faith and found true love. And since January 2018, she's had a new role at the credit union, now known as Allegiance: president and CEO.

So, for anyone frightened about life being upended by the coronavirus, struggling to create a new way of life, or seeking to emerge from this ordeal on a better path, Amy's journey offers clues and, most of all, hope.

"I have this little trick my boss taught me one time," she said. "Imagine you have a magic wand. What would you do with it?

"Then ask what you can do to move toward that direction."

On that fateful morning, Amy sat at her desk facing out the front of the federal building.

Until explosives sheared that entire façade.

Once conscious in the basement, her awkward position created the sensation of being upside down.

She heard people talking and lured them to her. She squeezed a hand far enough for someone to grab it. Then fears of another blast forced her would-be rescuers to leave.

Abandoned, all sorts of images flooded her mind - including, for the first time in her life, the desire to become a mother. She remembered a song she used to sing at church. It spurred "something supernatural."

"I promised God I would never live my life the same," she said.

"We were the first crew released back in," Hill said. "We got a radio transmission that the basement was filling with water so to concentrate there first."

The next few years were tough. The joy of work pulled her through, as did becoming a mother in 1999.

In hopes of earning further promotions at work, Amy returned to college. She got a bachelor's degree, then an MBA.

"Pretty much everything I do, before I cross one finish line, I'm already looking for the next, trying to figure out how to level up," she said. "I've also found that when you get your act together in one area, a lot of times it spills over into other areas."

Spill? The transformation that followed carried the velocity and impact of a firehose.

She started with her weight. She lost 30 pounds to prepare for a gastric sleeve operation and 70 right after.

Then, she went for a bike ride. "When you've been encumbered by all that weight and then you don't have it, you feel freedom."

She "leveled up" from neighborhood rides to local events to a 50-miler, a 100-miler, even a seven-day trek across Oklahoma.

In 2010, handing out medals to finishers of Oklahoma City's Memorial Marathon made her want to join the fun.

She also turned 45 that year. In addition to getting divorced, she celebrated with a 45-mile bike ride with friends through a wilderness refuge. Two years later, she married the guy who helped organize it.

Signing up for a sprint triathlon forced Amy to learn how to swim. She leveled up to an Ironman 70.3 (a "half Ironman"). She swore that was it.

"But then I was turning 50 and wanted to do something big," she said.

She didn't think she was going to make it. With time running out, she heard the magic words: "Amy Downs, you are an Ironman!"

"It's probably the proudest moment of my life," she said.

While overhauling her life, the book "The Purpose Driven Life: What on Earth Am I Here For?" inspired Amy to begin sharing her story. She decided to turn it into a book. After years of work, "Hope Is a Verb: My Journey of Impossible Transformation" published in March.

"I'm trying to take something that was meant for evil and use it as a way to ignite hope in other people," she said.

Between the 25th anniversary of the bombing and the pandemic, she considers this the perfect time for her message.

"We will get through," she said. "Those that get through and overcome will be those who can pivot to the new normal as quickly as possible."