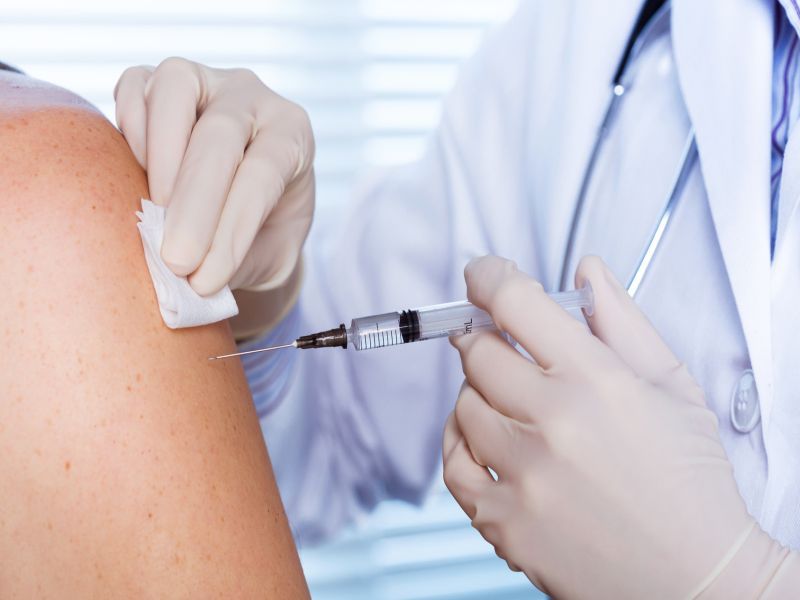 One side effect of COVID-19 vaccination is creating undue fear among women, causing them to worry that they might have breast cancer.

Both the Pfizer and Moderna vaccines can cause lymph nodes to swell, particularly those in the armpit on the side where the shot was received, experts say.

Some women are feeling these armpit lymph nodes and mistaking them for breast lumps, according to a recent report.

Further, these swollen lymph nodes can show up in a mammogram even if women can't feel them. That prompted the Society of Breast Imaging to recommend that women postpone any mammography scheduled within four weeks after their final COVID-19 shot.

Post-vaccine lymph node swelling is common and harmless, but doctors are concerned it could cause undue fear among women. It could also trigger a false positive on a mammogram, upping the need for unnecessary further testing, said Dr. Brett Parkinson, medical director of Intermountain Medical Center Breast Care Center in Murray, Utah.

"It's very unusual in the normal screening population to see enlarged lymph nodes. We only see it about 0.2% to 0.4% of the time," Parkinson said.

"So when we see it, it does raise a red flag, because when that kind of lymph node swelling is present, about 50% of the time, it can represent either a metastatic breast cancer that has gone from the breast to the lymph node under the arm, or leukemia or lymphoma," he added.

When doctors see this, they want the patient to return. "We do additional testing, usually ultrasound, and often we will do a biopsy to rule out one of those malignancies," Parkinson said.

He noted that about 16% of clinical trial patients had enlarged lymph nodes after their second shot of the Moderna vaccine, and the Pfizer vaccine produced a similar effect.

"I actually had a palpable axillary [armpit] lymph node following my vaccination," Parkinson said. "It happens in men as well."

A series of case reports published online recently in the journal Clinical Imaging detailed four women who got the COVID-19 vaccine and then sought breast screening.

Some were concerned they might have breast cancer. For example, a 59-year-old woman with a family history of breast cancer received targeted ultrasound to evaluate a lump in her left armpit, nine days after getting the Pfizer vaccine, according to the report from a team in the radiology department at Weill Cornell at NewYork-Presbyterian in New York City.

Others received a false positive. Such was the case of a 42-year-old woman who had a routine mammogram and was found to have multiple swollen lymph nodes in her left armpit. She then had to return for a follow-up ultrasound exam to rule out cancer.

Aubrey Lewis, a nurse at University Hospitals in Cleveland, told ABC News she initially had no side effects to the Moderna vaccine, but after a few days found swelling in one of her lymph nodes.

"I felt under my armpit to see if there was anything there and I felt a lump. It was kind of hard, but still mobile, it moved around," Lewis said.

"I was like, 'That's a weird spot to have a tender lymph node,' but as soon as I put two and two together--that I had just got the COVID vaccine on that side--I figured it was related to that," she continued.

Based on these cases and the Society of Breast Imaging recommendation, a number of health systems nationwide are asking women to delay their mammogram for at least a month after vaccination, Parkinson said.

"What we're doing at our facility is we have signage out saying, 'If you have had the COVID vaccine within the last four weeks, please talk to our front desk and we will give you the opportunity to speak to one of our providers in the clinic,'" he said. "We give the women the option of going ahead and having their mammogram, but with the understanding that they may be called back."

Women who find a swollen lymph node in the armpit of the arm where they got their COVID-19 shot should not automatically suspect breast cancer, Parkinson added.

"We want to tell those patients, take a deep breath and if it goes away within three to four weeks, just come in for your regular screening," he advised.

However, doctors do want to see women if they have any of the other signs and symptoms of breast cancer, vaccination or not, Parkinson said.

According to the U.S. Centers for Disease Control and Prevention, these include:

"Those are signs that are worrisome, and you should still come in," Parkinson said. "We don't want women to postpone that."

The U.S. Centers for Disease Control and Prevention has more about the COVID-19 vaccines.