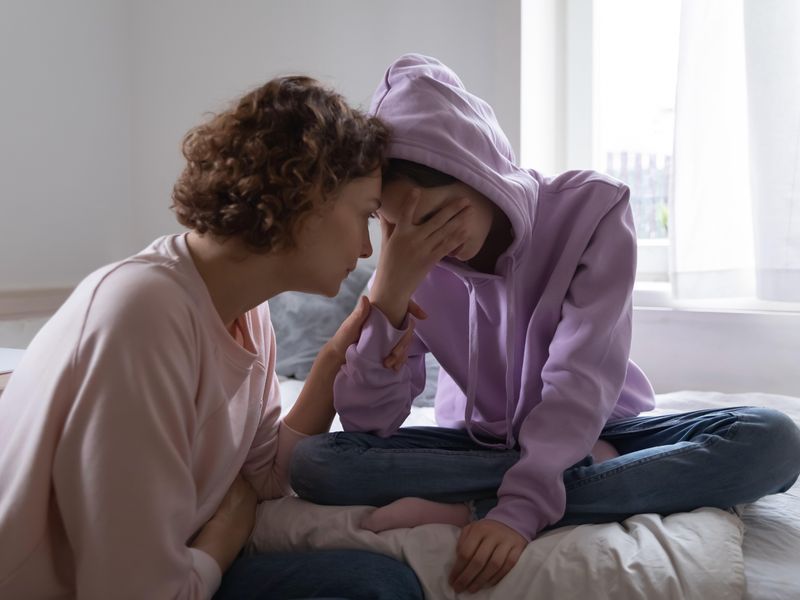 Would Your Teen Admit a Mental Health Issue? Poll Finds Roadblocks to Getting Help

Would you know if your teen was struggling with mental health issues?

Most parents say yes, but many also doubt their teen would tell them something was wrong, a new poll shows.

Specifically, nearly 95% of the parents surveyed said they were somewhat or very confident that they would notice the signs of trouble. Yet, only about 25% think their adolescent would definitely talk to them, while 55% say their teens would possibly talk to them if they were experiencing mental health issues.

In many cases, parents are the ones most likely to recognize and get help for their kids.

"Certainly, mental health has been an important issue in the past and increasingly important for adolescents during the pandemic," said Dr. Gary Freed, a pediatrician at C.S. Mott Children's Hospital and University of Michigan Health, and co-director of Mott's National Poll on Children's Health. "We wanted to check in with parents and see what their experiences have been and where they might need some help in trying to make a difference for their children who might be struggling."

It can be difficult for parents to tell the difference between normal adolescent behavior and something more significant, the poll authors noted. Most adolescents do experience periods of moodiness and emotional behavior.

More than 1,200 U.S. parents responded to the poll, saying they perceived warning signs to be frequent comments about being worried or anxious, moodiness, decreased interaction with family, a drop in grades, and changes in sleep and eating patterns. Between 49% and 65% of parents cited each of these concerns.

"And those are all exactly the kinds of things that parents should be looking for and also need to remember that not all adolescents are going to show all of those signs, and some may be easier to recognize than others," Freed said.

Most parents in the poll, 82%, said if they thought their adolescent was having a mental health issue, their first step would be to talk with their kid. About 55% said they would keep a closer eye on them. Only about 43% said they would make an appointment with their child's doctor, while 25% would check with a teacher and 13% would get advice from family or friends.

"Parents need to recognize that if they notice a change in their adolescent's behavior or are concerned about mental illness, that the first step they need to take is actually to talk with their adolescents and try to determine whether they can manage those current challenges on their own or if they seem overwhelmed -- and that parent should trust their gut," Freed said.

Be a good listener and initiate non-judgmental conversations, Freed suggested.

Stigma around mental health may make it harder for kids and parents to seek help, hoping instead the symptoms will go away on their own. But mental health issues can lead to serious consequences, so it's important to get help when they do arise.

Dr. Anish Dube is program director for psychiatric residency training at Charles R. Drew University of Medicine and Science in Los Angeles and a member of the American Psychiatric Association Council on Children, Adolescents and Their Families, and was not involved with the poll. He was encouraged by parents' responses that they're actively looking out for their children's mental health.

Dube suggests that parents can open lines of communication with their adolescents by being available to them.

"You have to be careful about both allowing the young person to explore and be an individual and afford them a degree of privacy while at the same time reminding them that the parents are there to support their children, their adolescents, and when needed they're going to step in," Dube said.

The transition to adulthood is filled with both highs and lows, Dube said. It's as important to celebrate those successes as it is to be supportive during those lows.

"If adolescence is given the right support and there's the right enrichment and the right resources available at this time, it can also be a very healthy period in a young person's life and a healthy transition into adulthood and healthy functioning," Dube said.

Dube said he suspects that some of the increase in children's mental health issues are a factor of better screening, and that children in decades past also struggled.

Yet there are added stresses, Dube said, noting that the parents in this survey had children ages 11 to 18, some of them on the cusp of adulthood and wondering what their future holds, which has been more difficult to ascertain during the pandemic.

Parents should also know that they're not alone and they might need to seek outside help, Freed said.


Notably, only 4 in 10 parents said their child's doctor asks about mental health at routine checkups.

"Parents should know also that they are empowered, that if they feel their adolescent's provider isn't being proactive and raising these issues, they need to bring it up," Freed said.

The findings were published March 21 in the C.S. Mott Children's Hospital National Poll on Children's Health.

The American Academy of Pediatrics has more on the ongoing children's mental health emergency.