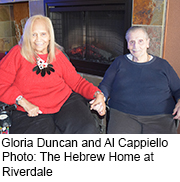 Can You Find Love in Long-Term Care? Just Ask Gloria and Al

Romance was absolutely the last thing Gloria Duncan and Al Cappiello had on their minds when they became nursing home residents.

"When I got here, I felt almost like my life was over. I was a very active, social person. I was almost devastated," Gloria said.

But then she met Al, who asked Gloria to be his date at the "Seniors' Senior Prom."

Al said he had noticed Gloria in an exercise class, but was a bit too nervous to ask her out then. He said his nerves don't usually get the best of him. "It only happens when someone is very nice and very pretty," he said.

Al finally worked up the nerve to ask Gloria to the prom. "She gave me a little hard way to go, but then said yes, and we had a pretty good time," he said.

"This was the last thing I expected. I didn't expect to meet anyone. I came here figuring, 'It's the last stop.' But I feel so lucky now. Gloria is beautiful inside and out," Al said.

Gloria added, "We found out we had a lot in common. Now we see each other every day. It gives us something to look forward to."

Fortunately for the couple, they were staying in a nursing home that pioneered a sexual expression policy for seniors. The Hebrew Home at Riverdale, in New York City, not only encourages romance and companionships between residents, they have an official policy to guide the staff.

Daniel Reingold, president and CEO of RiverSpring Health (of which Hebrew Home is a part), said, "Getting older is not a disease or illness. It's just a different chapter in life. But as we age, everything seems to become about loss. Connection is a basic human need; why would we want to lose that?"

Reingold said their sexual expression policy, developed in 1995, is lengthy and comprehensive. If two people both retain normal thinking and memory skills, the staff is instructed not to interfere with a couple. People are allowed to have intimate relationships. They are also allowed to receive and view pornography.

"We try to accommodate them. We might ask if they'd like to move closer to each other, or if someone wants to move from a semi-private to a private room?" Reingold said.

He said it's a bit trickier when someone has memory issues. "We have to protect people from unwanted touching. If someone is interested in a relationship, we engage the clinical team to help make sure there is consent," Reingold noted. "We ask people with Alzheimer's disease to make decisions everyday about what they want to eat or activities they want to do. We can ask, would you like to hold hands with Mr. Jones today? And, we have to honor their answer."

Reingold explained that if someone still has all of their mental function, families aren't allowed to have a say in what their parents or grandparents might do. But, he said, if someone has memory concerns and a family is adamant that they don't want their loved one involved with another resident romantically, the facility will honor those wishes.

"The real tricky situation is when someone with Alzheimer's is still married to someone living in the community, and wants to have a relationship with another resident," Reingold said. Some families are OK with it, he said, just like former Supreme Court Justice Sandra Day O'Connor had been when her husband with Alzheimer's found a new love in his nursing home. Others aren't.

"Not a lot of families really object. We're not running a brothel. Touch is reassuring. It might be something as simple as holding hands in the lounge," Reingold explained.

The Hebrew Home also has a program called G-date (Grandparent date). Residents express an interest and staff in the facility set up matches. On the day of the date, women are treated to a beauty parlor appointment, and men can get a shave. They set up tables in their cafe and make it special for the dates. After that, they can exchange phone numbers, and it's up to them whether they see each other again.

Gayle Doll, director of the Center on Aging at Kansas State University in Manhattan, Kansas, said, "Every nursing home needs to have a policy. RiverSpring has had their policy for 20 years. It shouldn't be unusual, but it is."

Doll said, "There's a stigma when thinking about older adults and sexuality, and it's more apparent and prevalent where a nursing home is concerned. It's hard to imagine sexuality in older adults in general, let alone a population that can't care for themselves. But ask yourself, do you like sex? If you like it now, you'll like it later. When do you think the cutoff date is?"

Gloria said the policies in the nursing home are helpful. "If you're together and you cuddle, nobody tries to disturb you or push you away from each other," she explained.

"I feel extremely lucky to have company, and someone I can relate to, who I care about," she said. "He makes me laugh all the time. It's so nice to have someone with you to laugh with."

Read more about romance and sex in nursing homes from AARP.