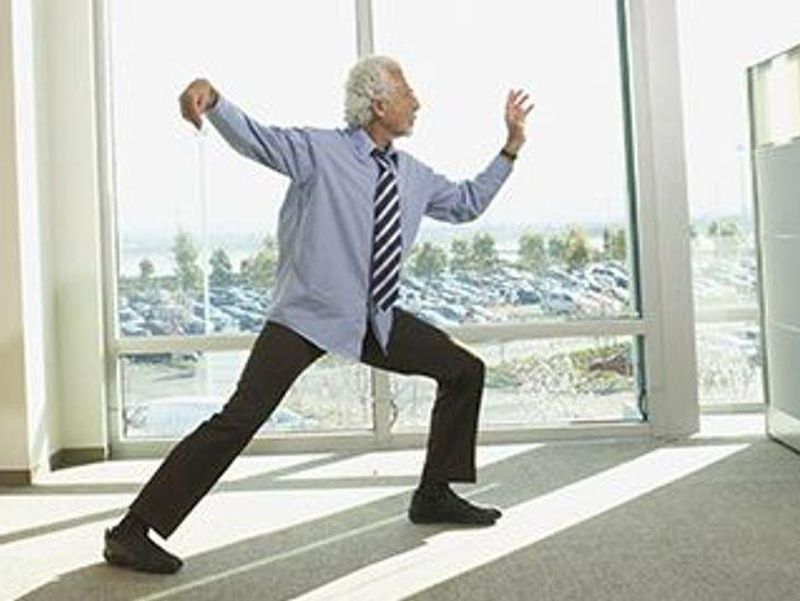 Tai Chi Equal to 'Regular' Exercise in Trimming Your Tummy

Could exercise that uses slow movements and breathing, like tai chi, do as much for trimming belly fat in older adults as aerobic exercise?

It might. A new study found that individuals aged 50 and up who practiced tai chi for 12 weeks lost about as much waist circumference as older adults who did conventional exercise (such as aerobics and strength training).

Though tai chi is considered a suitable activity for older people, including those who are not active, there previously has been little evidence of its health benefits, said study author Parco Siu. He is head of the division of kinesiology at the University of Hong Kong School of Public Health.

In the study, the 543 participants each had "central obesity," which happens in those with metabolic syndrome, the authors said. Metabolic syndrome is a cluster of risk factors that increase the risk of developing type 2 diabetes and cardiovascular disease.


Siu's team randomly assigned study participants to three groups. The program used what is called the Yang style of tai chi. Conventional exercisers did brisk walking and strength training. The two exercise groups did their assigned exercises in instructor-led workouts three times a week for an hour. The third group did not exercise.

The two exercise groups lost about the same amount of waist circumference. They also saw favorable impact on their HDL cholesterol. They did not have detectable differences in fasting glucose or blood pressure. The control group gained an average of 0.8 cm (about one-third of an inch) to their waist circumference over the 12 weeks.

A mind-body exercise that involves slow movements and breathing, tai chi has been described as "meditation in motion." It is practiced in many Asian countries and is becoming more popular in Western countries, such as the United States, where about 2 million people practice it, the study authors noted.

The findings were published May 31 in the Annals of Internal Medicine.

Michael Rogers, an American College of Sports Medicine fellow and director for the Center for Physical Activity and Aging at Wichita State University in Kansas, said past research he's been involved with had different results, though the impact the research was considering was not exactly the same.


"Out of all those different modes, the only one to improve aerobic fitness was the aerobic group. We did not determine changes in body composition. We only looked at aerobic performance," Rogers said. "You could argue its apples and oranges we're trying to compare here - aerobic fitness versus body fat - but the two are related," he added.

"We know tai chi is great for balance, of course, but also for increasing muscular strength," Rogers said. "This is probably the first one I'm familiar with showing that tai chi has an effect on fat in middle-aged and older adults."

The new study was not diet-focused, and Rogers wondered if perhaps those in the tai chi group became more aware of their bodies through the mind-body exercise and took additional steps to improve their nutrition, thereby reducing their waist circumference. Rogers would like to see further studies that control for diet, but also look at the effect that the mind-body connection in tai chi may have on the body.

For older adults planning to start an exercise routine, he suggests a well-rounded exercise program with two modes, aerobic exercise plus either balance, strength or tai chi.

The U.S. Centers for Disease Control and Prevention has more on the benefits of exercise for older adults.