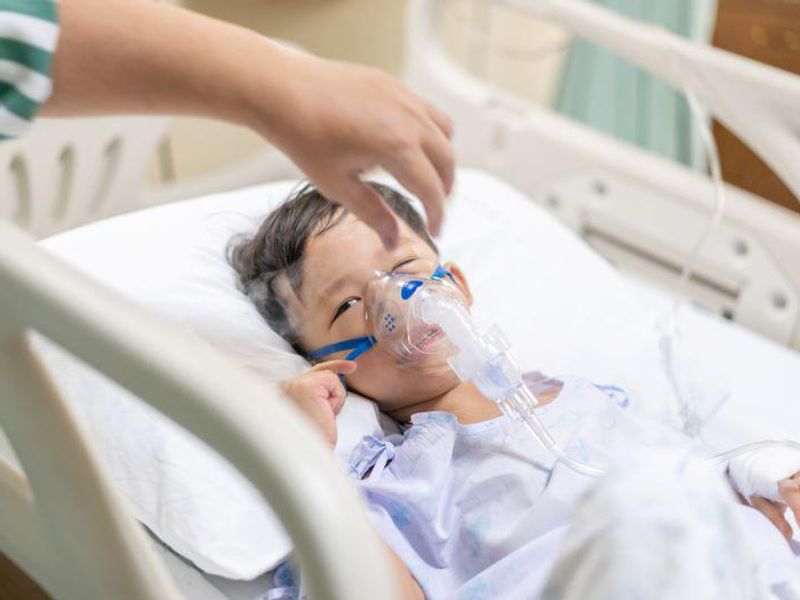 Which Kids Are Most Vulnerable to Severe COVID-19?

As a record number of American kids are being hospitalized with COVID-19, a new study helps clarify which ones are at the highest risk for serious complications.

The study tracked over 3,200 children and teenagers who landed in an emergency room with COVID-19 symptoms and tested positive. It found that older kids -- between the ages of 10 and 18 -- and those with chronic medical conditions were at heightened risk of a "severe outcome."

That included complications such as respiratory distress, heart problems and brain swelling.

In all, 23% of kids seen in the emergency department needed to be hospitalized, with just over 3% having a severe outcome.

Those numbers should be taken in context, said researcher Dr. Todd Florin, of Lurie Children's Hospital of Chicago. He stressed that the study included only kids who were sick enough to end up in the ER -- and not the many who would manage COVID-19 at home.

But the findings give a clearer idea of which kids are at greatest risk of severe complications, Florin added.

Children are much less likely than adults, especially older adults, to become gravely ill with COVID-19. But with the Omicron surge and the sheer number of Americans being infected, pediatric hospitalizations have shot up since mid-December.

Much of that rise has been seen among children younger than 5, who are not yet eligible for vaccination.

For the week ending Jan. 8, the rate of COVID-associated hospitalization in that age group stood at just under 8 per 100,000, according to the U.S. Centers for Disease Control and Prevention. That compared with just over 2 per 100,000 among kids aged 5 to 17.

Past studies have made it clear that, as in adults, chronic medical conditions can make kids more vulnerable to severe COVID-19.

In the new study, kids with chronic ills were about twice as likely as those without to have a serious complication. Those chronic conditions included heart disease, diabetes, gastrointestinal disorders and neurological conditions, among others.

However, one common childhood ill -- asthma -- was not linked to a higher risk of serious complications.

"That was a surprise to us," Florin said. Some past studies have pinned asthma as a risk factor for severe COVID-19.

Florin speculated on a possible reason: The researchers did not have information on how well-controlled kids' asthma was, and many may have had milder cases.

That is a possibility, agreed Dr. Benjamin Kopp, a pulmonologist at Nationwide Children's Hospital, in Columbus, Ohio.

He also said the asthma finding may be related to how the study defined "severe" -- not only hospitalization, but serious complications during the hospital stay.

"They looked at the sickest of the sick," said Kopp, who was not involved in the research.

The study was done before Omicron became the dominant pandemic variant. But while Omicron appears to be milder than its predecessor Delta, it's likely that the risk factors for developing severe COVID-19 will remain the same, Kopp said.

The findings, published online Jan. 11 in JAMA Network Open, are based on 3,221 children and teenagers seen at emergency departments in 10 countries -- 62% of those in the United States. All arrived with symptoms of COVID-19 and tested positive.

Just under 23% needed to be hospitalized, and just over 3% developed a severe outcome -- cases where kids developed signs of organ damage or needed interventions to support their heart, lungs or kidneys. Overall, four children died.

Kids between the ages of 10 and 17 were at highest risk, with 5.5% developing a severe complication. That compared with 1.7% among babies younger than 1 year.

Florin pointed to a finding he called "reassuring": When kids were sent home from the ER, it was rare for them to take a major turn for the worse. Of those 2,510 kids, 2% were later hospitalized, and 0.5% developed a severe complication.

And now, Florin said, "the data really suggest that vaccination is the number-one measure to protect children from severe disease."

Kopp made the same point. "We highly encourage vaccination," he said. "It cuts the risk of hospitalization and severe outcomes."

And that applies whether kids have risk factors for severe COVID-19 or not. "Even though there are risk factors," Kopp said, "you can never predict who is going to develop severe disease."

The American Academy of Pediatrics has more on COVID-19 and children.