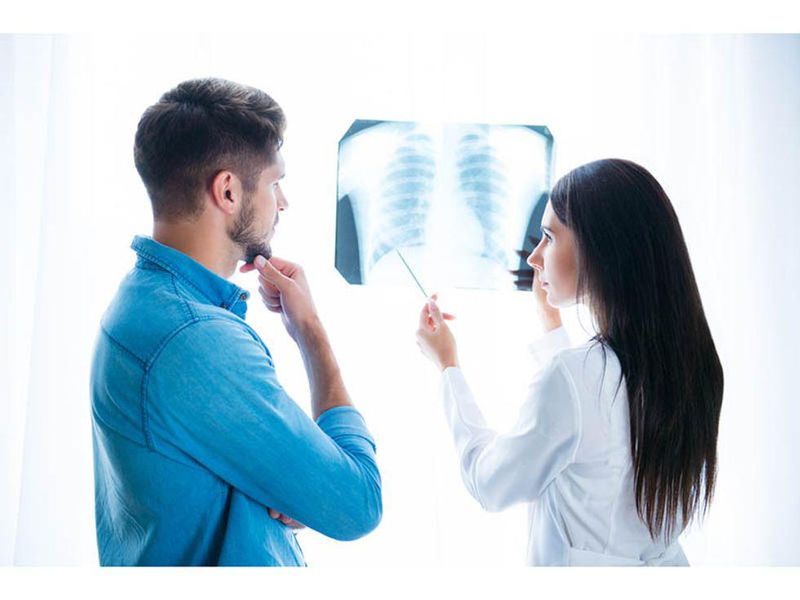 Even after a mild case of COVID, some people suffer breathing problems that last for months. Now, a new study suggests many of them may have abnormalities in the small airways of their lungs.

Researchers found that of 100 patients with "long COVID" symptoms, more than half had signs of small-airway disease on CT scans. And people who'd been mildly ill at home were just as affected as those who'd been hospitalized.

Specifically, the patients showed signs of "air trapping" in the lungs -- where a person is able to take a full breath in with no problem, but the air is abnormally retained on the exhalation.

It's generally a sign of inflammation in smaller airways called bronchioles, explained Dr. Cedric "Jamie" Rutland, a pulmonologist and volunteer spokesperson for the American Lung Association.

Rutland, who was not involved in the study, said he regularly treats patients with persistent respiratory symptoms after COVID. That often involves medications that ease airway inflammation, like prednisone or inhaled corticosteroids, he said.

Patients vary in how long they take to recover from those symptoms, according to Rutland. And it's still unclear whether some will have ongoing lung disease.

Similarly, Comellas said, it not clear whether the airway abnormalities seen in this study will resolve, or mark the beginnings of a chronic condition.

Comellas suspects both will ultimately be true: Some patients will fully recover, while others will not.

He and his colleagues report the findings March 15 in the journal Radiology.

Recent studies have estimated that up to 30% of people infected with SARS-CoV-2 develop symptoms that persist for months after their initial illness. Those problems include fatigue and headaches, memory and concentration issues, loss of smell and taste, and respiratory symptoms such as shortness of breath and chronic cough.

One theory is that in some people, the infection over-activates the immune system, setting off a lasting inflammatory response in the body.

But it's still something of a "mystery," Rutland said, as to why only certain people develop lasting problems, even after mild COVID.

The new study included many COVID patients who might not obviously be at high risk for lingering respiratory problems: Of the 100 patients, 67% had not been hospitalized. And while some had a history of lung disease, including asthma and emphysema, most did not. Three-quarters were lifelong nonsmokers, while 2% were current smokers.

Yet all had been suffering symptoms like shortness of breath, cough and fatigue for more than 30 days after their COVID diagnosis.

So Comellas and his colleagues had each patient undergo CT scans. At that point, half were more than 75 days past their COVID diagnosis. For some, more than six months had passed.

Overall, the study found, 58% showed signs of air trapping in their lungs. That included 57% of patients who'd managed their initial COVID illness at home.

And when it came to the degree of air trapping, the severity of the infection did not seem important: Both hospitalized and non-hospitalized patients had similar amounts of lung tissue affected by air trapping -- a finding that Comellas called surprising.

The picture was different when it came to patients' performance on spirometry -- standard tests of breathing capacity that detect obstructions in the larger airways. They actually looked similar to a group of 106 healthy adults who were studied for comparison.

He believes that COVID patients with long-haul respiratory symptoms should have a CT scan to look for small-airway abnormalities. Rutland agreed, saying he would "definitely" do a scan in those cases.

"I really do think a pulmonologist needs to be involved in the care of these patients," Rutland said.

He encouraged anyone with ongoing respiratory problems after COVID to seek care. "Nobody should just ignore these symptoms," Rutland said.

The American Lung Association has more on long COVID.